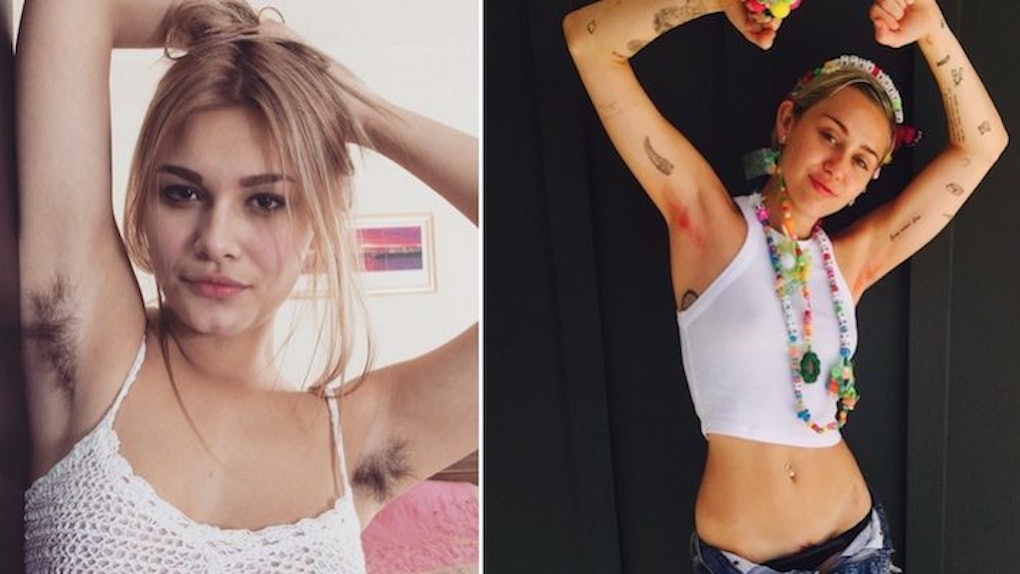 Armpit Hair Is Trending, And It's A Step Forward For Women Everywhere

If you're a celebrity, a feminist or just a woman who's tired of impossible amounts of self-maintenance, give the razor a break.

After decades of bald armpits and ever-present razor burn, female armpit hair is having a moment.

The armpit isn't the most stylish or pampered part of the female body (remember the Dove commercial?).

We might lather on sweet-smelling lotion after shaving our legs, but the pit rarely sees any kind of pampering beyond a little deodorant.

But in the post-Kardashian era, fake eyelashes and laser-crafted hairlines have been replaced by a commitment to the bohemian: bedhead, minimal makeup and pit hair long enough to have a little curl.

According to Mental Floss, bald underarms coincided with the arrival of the en vogue sleeveless dress in 1915.

Before that, the public never saw the space under your arm, let alone a stray flash of ankle.

The movie might've been a romance, but critics were quick to make cruel jokes about Roberts' sense of self-maintenance.

The quickest way to dismiss a subject that's frightening or shocking is by poking fun at it, so the media made a spectacle out of Roberts.

The message underneath the headlines was clear: armpits could not be beautiful or sexy, and women should be embarrassed of their own hair.

In 2015, however, it's a different world: festival culture and wannabe hippies run rampant across our social media feeds.

Starlet Shailene Woodley proudly admits to sunbathing her vagina and washing her hair once a month.

On dozens of blogs, women rave about menstrual cups instead of discrete tampons.

In short, real femininity is finally being celebrated.

Not the pristine, 1950s kind, either. Instead, we're celebrating a woman with all her hair intact.

Whether the pit hair belongs to Miley Cyrus, who notably died it pink and snapped the results for Instagram, or "Girls" star Jemima Kirke, the female body is on display in a new kind of way.

It's a beautiful day to grow out what you've got...

Especially if it's in the name of feminism.

And, of course, to give their razors an extended vacation.