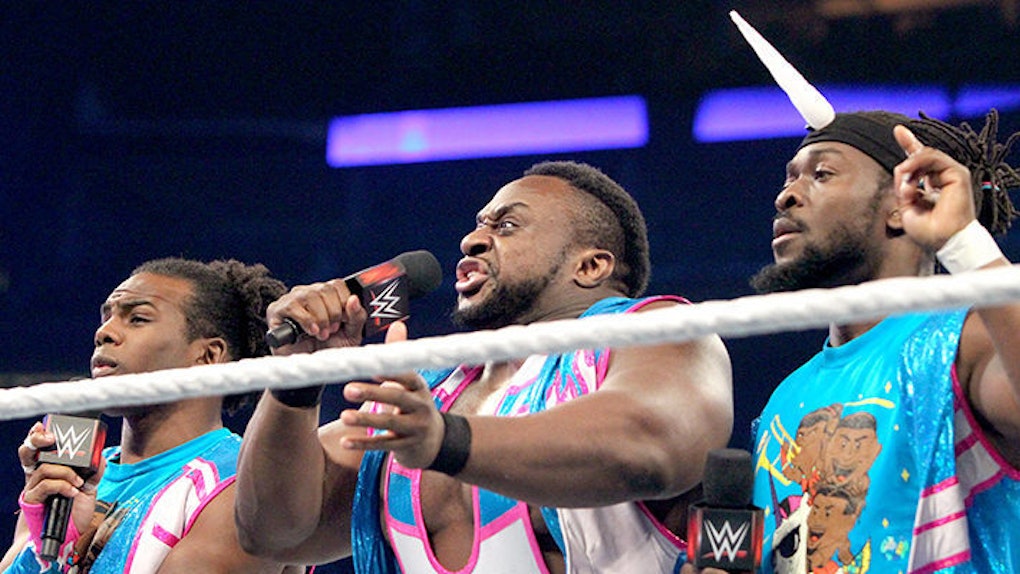 Watching Wrestling As An Adult Doesn't Make Me A Loser, It Makes Me Real

I still remember the very first time I ever watched WWE.

It was 1998; I was 6 years old and after being slowly introduced to pro wrestling via another promotion called WCW, my big brother finally convinced my mom to buy WWE Pay-Per-View.

This was the moment that shaped my entire childhood. My first Pay-Per-View happened to be "King Of The Ring," and for those of you who know anything about wrestling, it featured the iconic "Hell In The Cell" with Undertaker and Mankind.

For those unfamiliar, Undertaker completely bodied Mankind in that match, throwing him off the 20-foot cell once and right through it another time. There were thumbtacks, chair shots, hella blood and even a tooth dislodging, going right through Mankind's nose.

My mom watched the match with us and was literally in tears after seeing what these pro wrestlers were putting their bodies through. I'm not going to lie: The allergies started kickin' in for ya boy too.

To this day, it still goes down as one of the most legendary matches in sports entertainment history.

Shout out to Mick Foley for putting his body on the line!

I never watched WCW again; I was completely hooked to WWE. I started going to the shows with my big bro and got to feel the energy for myself firsthand. I even had the distinct privilege of patting The Rock on his back as he fought up my aisle in a street fight against Shane McMahon.

Moments like those are what being a kid is all about. Even thinking about it now gets me hyped. (I'm also still convinced The Rock is my illegitimate pops.)

This late '90s period of wrestling, known as the "Attitude Era," is far from the watered-down, PG version you'll come across while flipping through your channels today.

It featured some of the most larger-than-life wrestlers ever, like The Undertaker, Mick Foley, The Rock and Stone Cold Steve Austin, who, to me, were like real-life action figures that knew how to talk their sh*t and, of course, back it up.

F*ck Michael Jordan. These were true role models who taught me how to live life.

Of course, the content back then was extremely violent, straight-up lewd; what the kids today would just describe as "ratchet." There's no denying it wasn't.

Between the weekly airing of "Monday Night Raw" and Comedy Central's "South Park," you can say I had a good sense of what the world was like in my early days. A few years later, I moved to New York and lost my ways.

I began messing around with other sh*t and went on a decade-long wrestling-watching hiatus from around 2003-2013. It wasn't until I downloaded the WWE Network and started re-watching some of the old shows I grew up on that I realized, "Hold up, this sh*t is too fire."

Not too up to date on the current storyline, I finally bought some tickets (with the homies) to see a show at Barclays Center, and just like that, we were teleported right back to our childhoods.

I felt the same adrenaline we had when we attended these shows over a decade ago. Not to mention, I was completely wasted and hadn't had anything to yell at for no damn reason in a minute.

I felt like a kid again and it was motherf*cking awesome.

Yes, I know wrestling is pre-determined; some would even call it fake. I'm sorry to tell you, but so is pretty much everything you're watching on Netflix right now. You sick?

Pro wrestling is a live show, and just like any soap opera or "reality" television show, it needs a storyline to keep us hooked. There's real athletic ability required when it comes to WWE, and most fans would argue it's akin watching live theater -- like, extremely off-broadway theater.

For some reason, wrestling fans are stereotyped as the illest of the herbs, but those who pass judgment and stereotype others are actually the worst.

Growing up and not being aware is one thing, but when people start to act like they're too cool for sh*t they enjoyed as a kid, or don't understand where a motherf*cker like me is coming from, they're just ignorant to life.

Then again, the best solution is not to mind what others think and keep on doing you. The reason I eat SPAM is the same damn reason I still watch wrestling: because f*ck y'all.

The late A$AP Yams, founder of the A$AP Mob and avid wrestling fan, put it best when he said,

When you stop having fun out here and stop enjoying things like you did when you were a kid, your life gets boring. I'm going to watch wrestling forever.

Let's not forget this is entertainment, you guys, and you don't have to watch it if you don't want to. Just know that I do, and I'm still wavy.