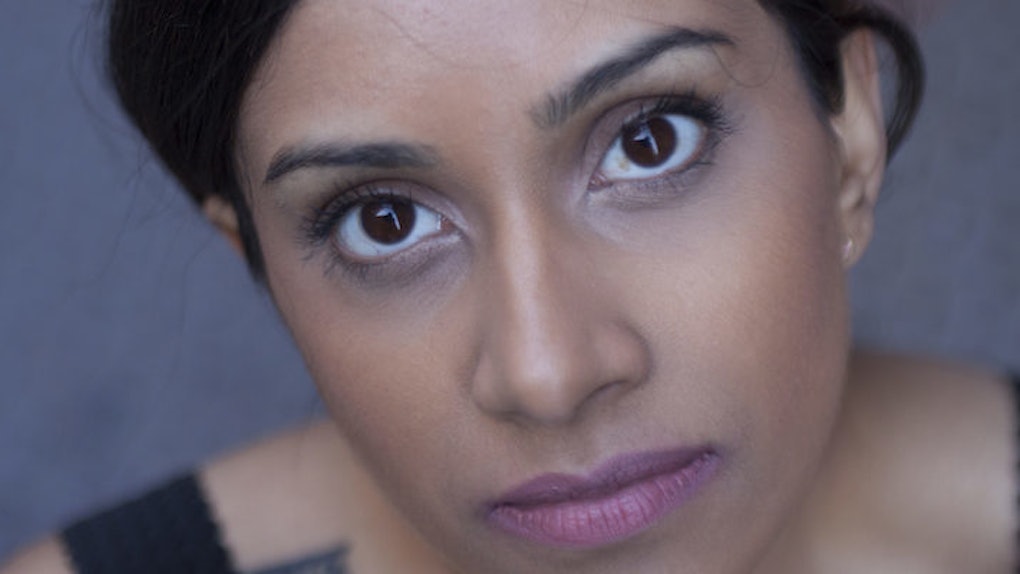 If you'd looked at me then, you'd think I was completely unfazed. But I was dying slowly inside. I could feel the stares of the high schoolers around me, suffocating me.

I did my best to ignore her and keep walking.

You brown piece of sh*t. I've done everything I can to try and forget those words, but they will never leave me.

Back in high school, I was in Select Chorus, an after-school program designated for talented singers. Singing had been a hobby of mine ever since I was a little girl, and I looked forward to chorus for the entire school day. It gave me a feeling of community. A common interest in singing brought all kinds of people together. It was the once place I thought no one could be teased.

That is, until Gina and her crew started whispering about me instead of singing their parts.

"Her curry ass would be sitting alone," they said.

Chorus was supposed to be my safe place, and now there was nothing safe about it.

Still, I'd force myself to go. I refused to be run out. I just have to switch seats, I thought. But as much as I tried to focus on nailing down my alto part, I couldn't stop looking over my shoulder in fear.

Lunchtime was hell. I didn't have anyone to sit with, so I sat alone. I like to think that middle school is where I first developed an affinity for being by myself.

When school let out and I went home, the tears I spent all day holding in would finally spill out. My mom would prod me about why I was crying, and she'd give what she thought was the best possible advice.

“Toughen up, baby,” she'd say. “Just focus on your schoolwork, and when high school is over, none of this will even matter.”

My mom was always right, so that's what I did. I grew a thicker skin. I ignored Gina and the girls when they said mean things to me. I scored straight A's and graduated high school in the top 5 percent of my class. But instead of being proud of my academic achievements, I was sad to be graduating with a reputation as "that Indian girl": the one who kept her nose in her books and out of gossip circles.

I don't think back on that time with a newfound wisdom. In fact, I don't think about it at all. I've suppressed everything I lived through from the ages of 10 to 17, because it's embarrassing. But the most embarrassing part is that I still didn't learn how to stand up for myself.

I was sitting in my therapist's office the other day when she asked me about my childhood. Low self-esteem, I told her, has plagued me for as long as I can remember. She went on to ask me if I had friends that I could count on growing up.

“What did they say to you, sweetie?” Her voice had a soothing, mom-like tone.

As I told her what those cruel kids had said to me, tears welled in my eyes.

“Sorry that I'm crying,” I said. I felt as though my experience wasn't worth crying about. “Isn't that just, like, bullying?”

I'd always associated racism with stone-throwing and picket signs. As a kid, I'd watch the news and see people rioting in the streets because justice hadn't been served. That was racism.

But racism doesn't just manifest itself in the form of physical brawls and police misconduct. My experiences with name-calling and social isolation aren't quite that dramatic, but that doesn't make them any less impactful -- or any less racist.

My therapist took off her glasses. "Do you think that experience might have something to do with why you have so much trouble loving yourself? The body dysmorphia? The lack of confidence?"

I broke out in tears. "Well, you tell me," I started, mascara running down my face. "How am I supposed to love myself when for my whole life, I've been told I'm not worthy of being loved?" My perfect red lip was still intact, the only thing masking how ugly I felt.

The worst part is that I've internalized the racism I was shown as a kid. I'm not very proud of it, but I don't like my skin color. I don't like myself. I tend to avoid dating Indian guys because a bunch of middle schoolers turned me against my own kind. Brown skin, they told me, is ugly.

I'm 25 now. It's been eight years since someone's teased me for the color of my skin. These days, when I walk down the street, I'm calm but cautious. I'm confident, but I'm also somehow just a little bit paranoid.

Because inside of the wiser, grown-up me, there's still scared, little-girl me. Whenever someone looks at me and stares a beat too long, I wonder, Why is that person looking at me? Is it because I'm brown?

That probably isn't the reason. But sometimes, I can't help but think it is.

Because as much as I try to pack up the painful memories and file them away for life, they are still very much a part of me: of my character, and of why I do what I do. Past pain has a way of creeping up on you, no matter how much you try to keep it in the past.