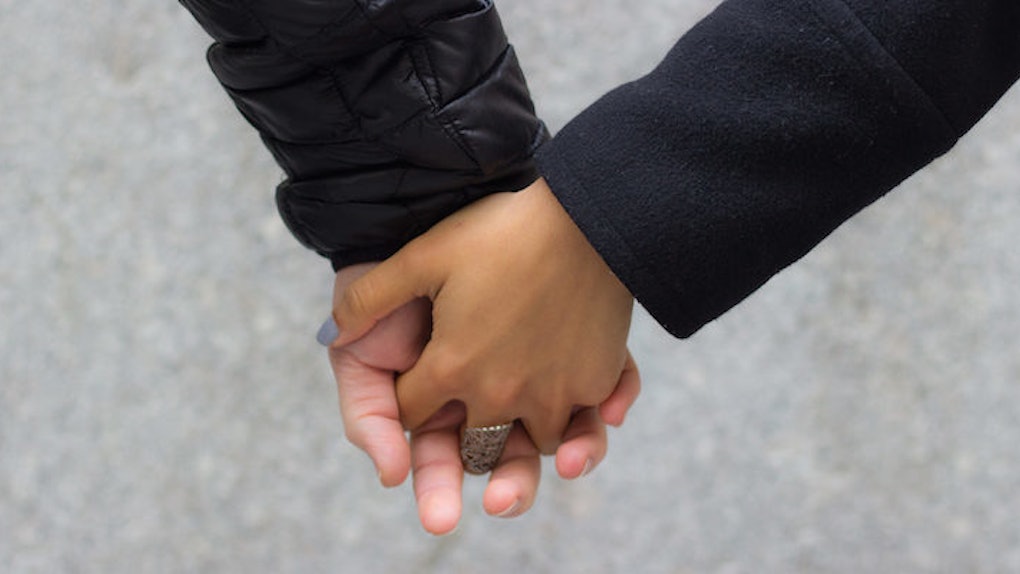 I consider myself an Oreo. I'm brown on the outside but totally white on the inside. I'm aware that's a slightly racist comment to make, but what I mean by that is I choose not to practice or identify with most elements of Indian culture. Indian movies never struck my fancy. I don't celebrate Diwali, the Indian New Year. And while my brown-skinned college classmates immersed themselves in Indian dance clubs and language classes on campus, I tended to stayed away from them.

I didn't intend for things to play out this way. But my upbringing instilled in me a sort of aversion to my own culture. See, I no longer speak to my conservative father, who hails from Jaipur, a small town in India. I grew up with a single mom who divorced my dad when I was less than a year old because he was an aggressive, narcissistic, verbally abusive drunk. He'd go to work and disappear afterward for hours on end, leaving my mom in the dark as to his whereabouts.

On the nights he did come home, his live-in mother would insist on accompanying my parents on their date nights. Yes, during the brief time my mother and father were married, my mom's mother-in-law lived in their house, which is a pretty standard familial arrangement in Indian culture. I was too young to process her presence, but from what my mom told me, she was like, Cinderella-stepmom evil.

Disclaimer: I'm not here to generalize Indian culture or Indian men. But living through the dynamic between my mom and dad turned me off and made me want to avoid that dynamic. Traditional Indian homes are predominantly run by the family's patriarch, so I'd have a higher chance of running into that issue with an Indian husband. And, well, I want to run my own household.

Since I've spent my entire life dating white guys, I've always been one half of many interracial couples.

But I've always felt weird about it.

When I was 17, I had my very first crush. I know, I was a little late to the crush game. Tim* was British, blue-eyed, and had this tousled, beautiful, blond head of hair you absolutely couldn't resist running your hands through. After Tim, I noticed a pattern in my love life: I began to exclusively date blond-haired, blue-eyed guys. Anyone who didn't straight-up look like a Ken Doll wasn't a viable relationship candidate.

I've been in two serious relationships. First, there was John*, whom I've written about extensively. He was my first love, and he also happened to look just like Tim. He never took me seriously as a partner because of my race, often joking I was "'the one before the one,'" who would of course be "some Catholic chick" just like him. (I thought he was being tongue-in-cheek, but it turns out he was just being an assh*le.)

Whenever John and I walked down the street, people would look at us funny. But I couldn't tell if my insecurities were all in my head. Was it because I was brown and he was white? Was it because we just so happened to look really f*cking good next to each other? Or was it just because they liked my outfit and wanted to know where it was from?

Dating John also meant doing "white people" stuff: having full-blown Christmases, eating his mother's home-cooked ravioli and spending Sundays going down to the local driving range to watch his grandfather play golf with his brother. My family doesn't do stuff like that. Wintertime in my household usually means sitting around a table stiffly discussing politics and comparing the worth of each Sharma clan member based on how much money he or she makes.

At times, doing "white people stuff" with John made me feel kind of felt like a performing animal, whose role was to entertain the crowd. In the words of John's 10-year-old little brother, I was so "foreign" and "interesting." And you know kids speak the truth.

John also had his doubts about my family. He'd freak out over coming home with me because he was afraid of what my more traditional extended family would think of him. I can't say his insecurities were unwarranted. The poor guy would get the third degree every time I introduced him to another member of the family. It was a right of passage for anyone who looked like him.

After John, there was Kyle*, a green-eyed Croatian looker. Kyle did take me seriously, but every now and then, I'd feel out of place. One morning, I opened up a text Kyle's brother had sent him while Kyle was brushing his teeth (I know, I'm a total snoop by nature) that read, "How're things with that Indian chick?"

Really? That's how his brother, who had met me on more than one occasion, referred to me? Not the "cute chick," the "writer chick," the "chick who tells awesome dad jokes"? It was as if I didn't have a name, or face, or character. I only had a skin color. And if I did have character, I wasn't worthy of being defined by it.

Was my fate determined? Was I forever going to be known as "that Indian chick"?

It wasn't until well after I broke up with Kyle that I realized if I'd been dating an Indian guy, I wouldn't have ever run into that problem. Sure, I would have run into a slew of other problems, but not that one.

These days, I'm single, but I have this f*ck buddy who's an Irish, turquoise-eyed cherub. I don't just like looking at him (and do I ever), but I also like hanging out with him. He's so different from me. He grew up raising chickens and cows on a farm in Bumblef*ck, Ireland. I feel like I have so much to learn from him. Being with someone with such a different background from yours can open you up to new perspectives and new ways of life.

I've heard we're physically attracted to our polar opposites. Maybe there's something to that. I was surrounded by mocha lattes growing up, so it only makes sense that I now have an affinity for vanilla. But I think it's more than that.

I want to learn about other cultures, see how other people do things, and eventually develop a hybrid culture of my own: one in which my kids can bring home a boyfriend of any color without getting judged, but where I can still cook Indian food for dinner.

When I settle down with one man, I want the best of both worlds. I want to wear fancy Indian garb (because it's truly beautiful), but also spearhead elaborate egg hunts with my kids every Easter. I want to adopt certain aspects of my future husband's belief system, whatever those may be, but I also want to keep the Indian values my mother taught me. And hey, I'm not swearing off the idea of having an Indian hubby completely; if you can find me one who is open to adopting, doesn't care much for the Indian cinema and doesn't mind dating a writer, I may just consider him. At the end of the day, it's about the guy inside more than it is about anything else.

If that guy just so happens to look different from me, though, I don't want to feel weird when I'm walking down the street hand-in-hand with him. But I don't know if that'll ever happen.

I know that even if I stop giving a sh*t what others think, I'll still struggle with my own thoughts. The dream is that one day, the right guy will help me find my balance.