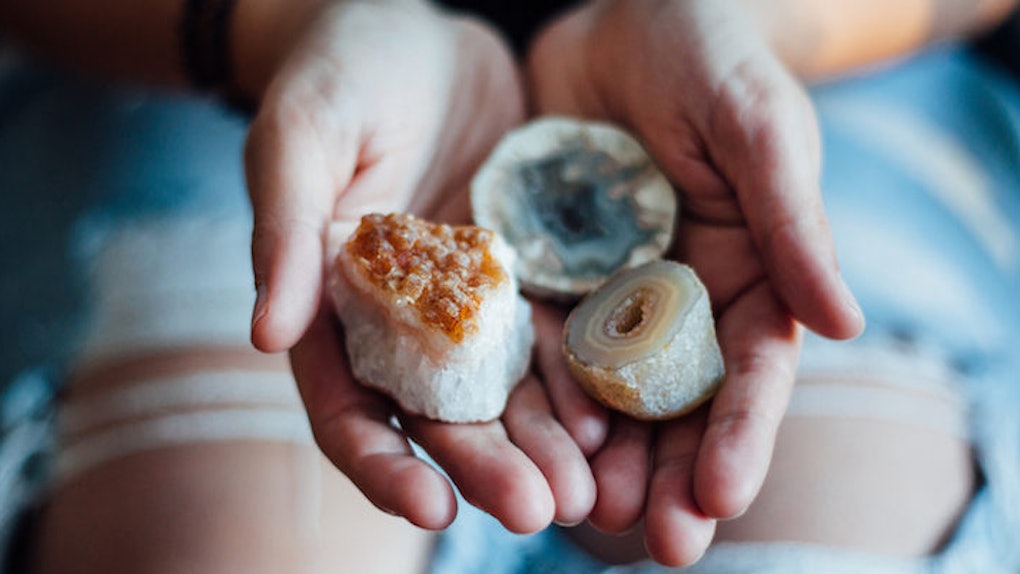 A Beginner's Guide To Using Crystals And Stones

My parents divorced when I was younger, and my mom has moved almost every year since then.

After having my own real apartment in the city, I left everything behind but a backpack, as I bopped in and out of rooms, tents and caves in brazil.

I'm not kidding when I say I slept on couches, on the floor and on a jagged rock for three nights.

I've always been sensitive, and perhaps even imaginative, but reality was really where my stubborn mind excelled. It wasn't until I began learning to fail, to fall and to fly into the darkness that my relationship with the crystals began to make sense.

To keep things basic, crystals (i.e. quartz, amethyst and diamonds) are solid substances whose atoms are arranged in highly-ordered patterns. They tend to be translucent, shiny, angular and jagged, sometimes.

Stones (i.e. rocks and gemstones), on the other hand, are several minerals combined in one mass and tend to be denser and rounder.

Each crystal and stone has traces of different minerals, and each has its own properties.

Outside of science, most people use the terms “crystals," “stones” and “gemstones” interchangeably, as you'll always find a mix of both in healing centers, crystal shops and spiritual altars.

The ones I tend to surround myself with come straight from the earth, but you can also find some that aren't naturally occurring and are made from combinations of glass in laboratories.

Each crystal and stone has traces of different minerals, and each has its own properties. Some are meant to help with relaxation and sleep, while others assist in sharpening the mind and concentration.

Each type vibrates at a different frequency (the unique vibrations of quartz is used for clocks to keep time), and because crystals and stones absorb energy, they should be cleansed often.

You can take them to the ocean, let incense smoke surround them or bury them in the earth. Just as you feel clearer and more concentrated after bathing in a waterfall or even after a shower, stones have energetic bodies like we do. And clearing them will bring a fresher, lighter energy to the space in which you keep them.

During a full moon, I place my stones in a crystal bowl with pure water and leave them outside through the night (a moonbath), later using the water in the bowl for my plants.

The relationship between water and crystals has been studied and recorded by scientists such as the legendary Dr. Masaru Emoto, who set out to prove human consciousness has an effect on the molecular structure of water and that positive changes to water crystals can be achieved through stimuli like prayer, high-vibrational words and music.

Everything speaks if you still your mind long enough to listen.

Everything speaks if you still your mind long enough to listen.

Stones talk to me. They tell me when they're ready to continue their journey, and they tell me with whom. It is not rare for me to have a specific stone for years and, all of a sudden, feel like it's time to give it away to someone, as if it has been theirs all along.

A great friend of mine took me to one of the biggest crystal and stone shops in the world, but I couldn't take home a single one. The energy of the space was so severe, sad and broken that every stone was silent, yet every stone was screaming.

Sometimes, I'll walk into other shops, and a few stones will whisper to me, telling me it's their time to leave with me.

I've also been given some of my most sacred ones along the way, occasionally as a present directly from the earth, appearing right below my feet as I walk barefoot up a mountain, down a waterfall or across a rocky road.

Some days, it feels good to carry a specific one in my pocket. Other days, I keep one by my computer for inspiration, and always I keep some by my bed. They protect, empower, and energize but only because they reflect all those things within me already.

Science won't make you believe, and neither will my words, so try it for yourself. Explore this solid, little miracle that you have in your hands any way you'd like.

Maybe pick a stone because you like its color or the way it glimmers in the light. Or perhaps you're searching for some of the properties it possesses.

Whichever crystal you choose, though, do it from a place of love and humility. Learn with it, grow with it, trust in it and, most importantly, trust in yourself.