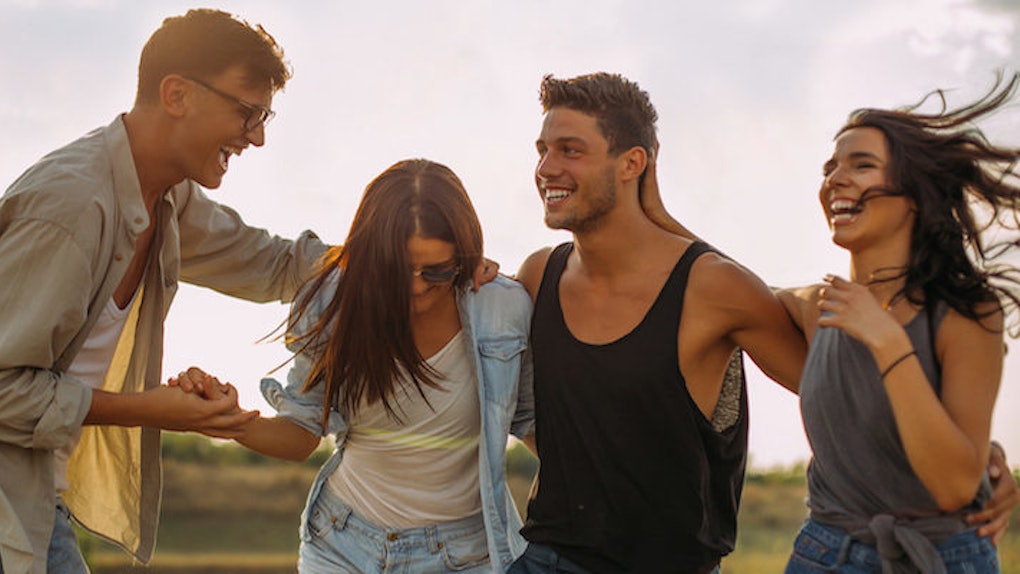 “Mean Girls” is a true cinematic landmark in the Millennial age, depicting, with stunning accuracy, the subtle ways high school girls will try to ensure that they stay on top of the social food chain.

Even as an adult male, I can relate. Because, sadly, there are some grown men out there who are barely distinguishable from Regina George.

These types of guys aren't concerned with being the coolest girl in school; they are preoccupied with making sure everyone knows they're the "alpha dogs" in any given situation.

While there are many paths men can take to adopt this sad mindset, it tends to be the result of reading pick-up artist manifestoes and being made fun of as teenagers.

In fact, most guys have been there. Around adolescence, they simply absorb certain messages about masculinity through a sort of cultural osmosis.

For most guys, that period during which we take these messages to heart is just another embarrassing phase to get over before growing up.

Some men never get over that phase, though. And these behaviors are tell-tale signs that they are still far, far too interested in letting you all know who the top dog is.

Lest anyone forget who the true alpha male is while caught in the midst of an otherwise normal interaction, this blow is dealt when a guy realizes some poor "beta male" has the "audacity" to talk to him like an equal.

To an outsider, there may be nothing diabolical going on here, but dudes know the truth: This condescending behavioral tactic is one minor, barely noticeable way another guy can send a clear message.

“I'm above taking a conversation with you seriously. I will speak to you like I would speak to a child.”

Making a joke about you the moment you receive female attention

Guys who are desperate to remind the world of their alpha status are particularly sensitive to any interaction involving an attractive human female.

This is especially the case when there are other men there, all vying for the affection of said woman.

Suppose she decides to show interest in another member of the group. Most guys will accept defeat and move on.

Certain men are not so easily deterred, though.

The moment it becomes clear that another man may have earned a woman's affection, this type of dude will find the first possible opportunity to bring up a funny, embarrassing anecdote about his supposed competitor.

In the mind of this particular brand of “alpha” male, this move may serve to convince the woman that she's making a mistake and should change her mind.

If that doesn't pan out, though, at least he can feel as though he got some minor revenge. Because he is not the type of guy to just be mature about this situation.

Blatantly objectifying his own girlfriend

Listen, if you're a dude who finds your girlfriend or wife beautiful and can't help but mention it once in a while, that's totally understandable -- and actually pretty sweet.

Some guys don't think “once in a while” is often enough, though.

As such, during every conversation, he finds a reason (even if there really isn't one) to bring up how “mind-blowingly hot” his girlfriend is. Which, let's face it, is a hard statement to respond to in any way that isn't completely awkward.

And if this guy has any pictures of her in a particularly revealing outfit on her phone, you can count on him showing them to you.

Back in high school, this behavior was acceptable because our hormones made all of our decisions for us. Now, it's just sad.

Quite simply, we're less impressed with your ability to charm an attractive woman, more depressed with the fact that you're an adult man who thinks objectifying her to prove a point is normal behavior.

Rule of thumb: If you're old enough to play “Mortal Kombat,” you're too old to be bragging about your ability to hold your own in a fight. Such boasts aren't impressive unless you're a pre-tween who thinks a video game is an accurate depiction of martial arts.

And yet some guys are incapable of watching anything longer than a 15-second MMA fight promo without casually mentioning they've actually got, like, so many black belts, and were considering a career in MMA before a vague “injury” ruined those dreams.

We get it, you could beat us all up if we crossed you. We're just not sure that's something a grown man should be proud of.

Gripping way, way too hard during a handshake

Not much more needs to be said here, right?

We know what you're doing, dude. We just don't know why.

Guys who are trying too hard to prove they're alpha males have an almost Pavlovian response to the word “testosterone.”

One mention of it and their eyes light up like an immigrant who has just heard their own language for the first time in years.

Because this is a topic they simply love talking about.

The problem is, not many other people care all that much about testosterone levels. It's just not the basis for an average, casual conversation.

As such, this guy will latch on to the vaguest possible chance to start talking about the issue.

Passing by a gym? He'll mention he crushed it in the weight room the other night, thanks to his new diet designed to maximize his T-levels.

Sunny day? He'll say he likes sunny days, since they supply him with the Vitamin D required for maintaining healthy T-levels, not that he needs it or anything.

I wish I was exaggerating.

Telling instead of asking

It seems innocent enough. You're hanging out, when one of your buddies says, “Hey, go grab me a beer from the fridge.”

Notice that he didn't ask you a favor. He gave you an order.

The problem is, this trick is too subtle to call him out on. Sure, if you get the beer, you'll be validating him, proving that he can tell others what to do and they'll listen up like a fresh football recruit getting the next play call from the quarterback.

On the other hand, if you refuse, you'll be the insecure guy who can't lighten up, making a big deal out of nothing.

It's truly a no-win situation, and guys who pull this move know it.

Calling other guys out for being "beta"

Imagine this situation: You're out at a bar with some friends, when you spot another guy from your past who used to treat you all like sh*t.

You'll probably make a few comments, reminding each other of what an assh*le he was.

And then there will be the dude who won't stop there. Instead, he'll launch into an epic rant about how the guy is just “a little beta bitch.”

(I swear, those will be his exact words.)

It just seems like men who care at all about the concept of a “beta male” are also the type who care way too much about being alpha males.

Sadly, this trend doesn't appear to be going anywhere. That said, guys are probably getting more creative about how they demonstrate their alpha qualities. New subtle put-downs to keep an acquaintance in line. New ways to one-up their fellow men. New methods for revealing that they are painfully insecure.

If you've got any other hilarious examples worth sharing, let us know in the comments, Chief.