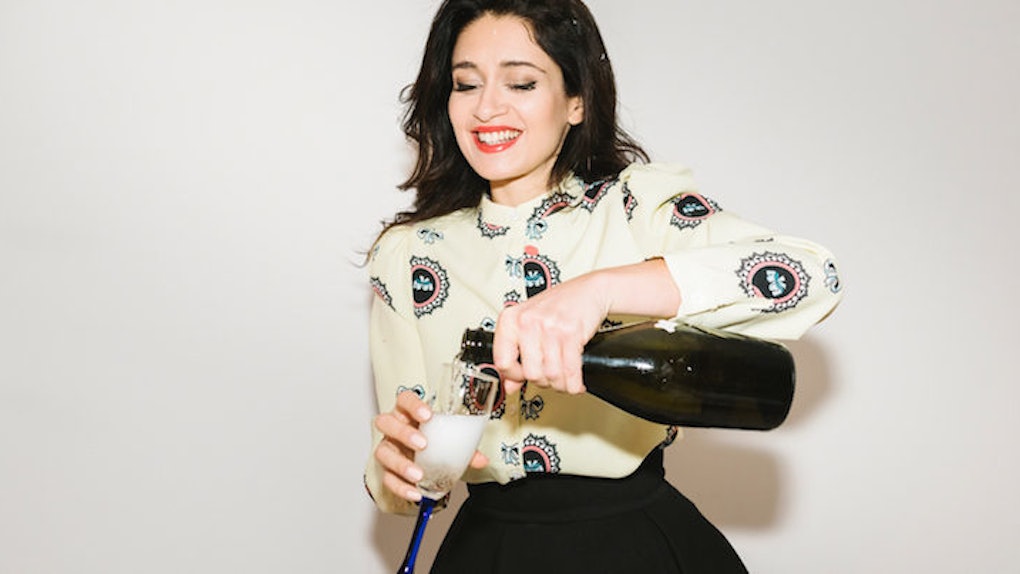 Mimosas And Memories: 10 Types Of People You Encounter At Brunch

Brunch is every 20-something’s favorite excuse to sit outside, sip cocktails under the sun and replay last night's excitement with his or her friend group.

Sunday Funday is a time for eggs benedict and champagne at 2 pm, only to hit the hay by 7 pm and sleep until your alarm rouses you for work on Monday morning.

We’ll have our brunch and drink it, too!

Of course, as with most social arenas, there are certain types of people you'll find at any given brunch table. Brunchers are a motley crew of personalities, all bringing something unique and interesting to the table.

Whether it’s the best stories or the biggest drama, everyone has his or her place at the table.

Brunch is truly a metaphor for your entire life.

Here are 10 types of people you will always find at brunch:

He or she takes the food at brunch very seriously. If there's a deal on an entrée plus bottomless offerings, you better believe your foodie pal is going to skip the deal and get what they want instead.

He or she will not hesitate to order two appetizers, an entrée and dessert. His or her friend group is totally fine with this --as long as he or she shares and doesn't expect to spilt the bill evenly.

While brunch can often be about the drinks, for a foodie, it's all about the eats.

Every friend group needs a mother figure, and when it comes to day-drinking, she is a crucial member of the team.

She's there to take care of her little, wayward chicks and whatever needs they might have.

Should someone get distracted and wander off? She will locate them. Should one of the girls end up with food poisoning after eating that questionable steak and eggs? She’ll be there holding her hair back.

From the door, to restaurant, to bar, to home... mama bear will make sure her party gets to where it needs to be safely.

Everyone relies on her.

The One Who Isn’t Having It

There'll inevitably be one person who's simply not having it, hiding behind an enormous pair of sunglasses at any given brunch.

In any case, this person will exhibit the ultimate resting brunch face.

While he or she may not be enjoying him or herself, he or she will still make sure your mimosas are three-quarters full of champagne and that the waiter brings your benedict just how you ordered it.

Everyone knows this is the person at the table no one is messing with.

There'll always be that one bruncher who is perpetually on some kind of fad diet or other.

Whether it be Paleo, Atkins or South Beach, he or she is the definition of a hard sell.

He or she is the person who makes everyone else at the table feel guilty as they cram french toast into their mouths while he or she gingerly sips on straight champs (orange juice has carbs, yuck!) and nibbles on a parfait.

The Orator can be found amongst any rowdy friends who brunch. This is the main storyteller; the person everyone counts on to lead and guide the conversation.

He or she is naturally charismatic and has zero issue keeping everyone entertained with tales of frat parties and past embarrassing company happy hours.

The group has mixed feelings about this friend, The Big Shot. Everyone loves the free drinks and shots this person insists on buying, but the exuberant energy so early in the day can be a little overwhelming.

The Big Shot is Mr. or Ms. Party, and he or she sure knows how to have a good time.

While you might play a little hard to get at first, he or she will have you dancing on the table before your third round.

While most people come to brunch in some form of tired floral joggers or track pants in an attempt to conceal their hangover to the best of their ability, there will undeniably be one member of the group who shows up decked out, dressed to the nines.

He or she will always make everyone else look shabby, gracefully pulling off a giant sunhat and a perfectly matching ensemble.

The majority of you will look on with disgust, but you can’t help but be impressed he or she got home at 4 am and still looks flawless.

The Scout Master is the organizer. He or she is the one who found the best deal, picked the restaurant and organized all of his or her irresponsible friends in order to make this brunch happen in the first place.

He or she also seems to carry extra supplies, such as Band-Aids, bobby pins and gum.

He or she is always prepared for anything.

The Center Of Attention

As with most social situations, there's always one person at the center of it all.

There'll naturally be one friend who's the loudest, the most outgoing, the most TMI and the most commanding. He or she may really not have that much to say, but he or she sure will be heard.

This person demands attention and by God, he or she will get it.

There is a hopeless dependent in any group. You know who this person is. He or she is one who can’t seem to do much for him or herself.

Well, there's a difference between "can" and "want to." For whatever reason, this person still has tons of appeal. He or she just needs to be coddled. People want to take care of him or her.

So, someone inevitably drives him or her to and from the restaurant, orders for him or her, makes sure he or she doesn’t get into trouble and then takes him or her home.

At the end of the day, know who you are at brunch, and you're going to have a great time. With the right combination of food, friends and delicious cocktails, the fun times will never end.