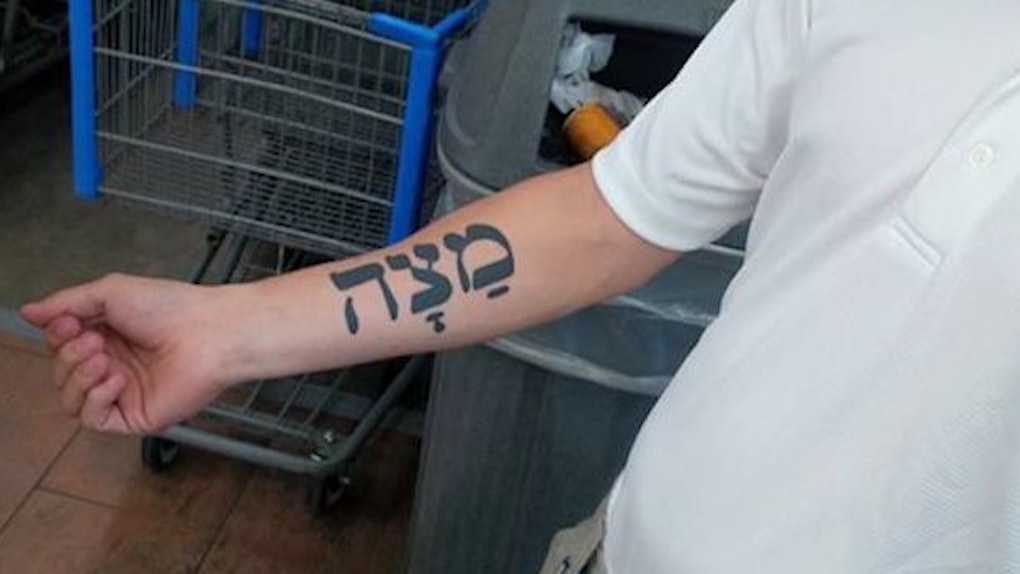 This Poor Guy's Hebrew Tattoo Definitely Does Not Mean 'Strength'

There are three indisputable truths in life.

The first is coffee is delicious, but it makes you poop. The second is people love watching YouTube videos of drunk men fighting. And the last is people have and will always get bad tattoos.

These are the only real certainties in our grisly, convoluted world. So, let's take a moment to be grateful for them.

I once met a girl with "Life is Art" tattooed on her neck. It might've been the worst tattoo I'd ever seen, and I've seen a picture of a guy who got a cat inked on his stomach so his belly button could look like a butthole.

Those tattoos are bad, but the truly devastating tattoos always involve mistranslations from other languages.

Luckily for you, we found a mistranslation masterpiece.

This guy thinks his tattoo means "strength," but it actually translates as "matzo."

To help you understand: This is a picture of "strength."

And this is a picture of "matzo."

Those two things are not the same. I know, it's very confusing.

Apparently, Hebrew-speaker Sruli Schochet was in a Walmart when he came across the man with this tattoo and asked him if he knew what it meant. As he wrote in his Facebook post, he didn't have the heart to correct him.

People can't seem to stop getting stupid tattoos in languages they don't understand, and I can't say I hate it.

Citations: Guy has no idea what his tattoo really means (The Daily Dot )