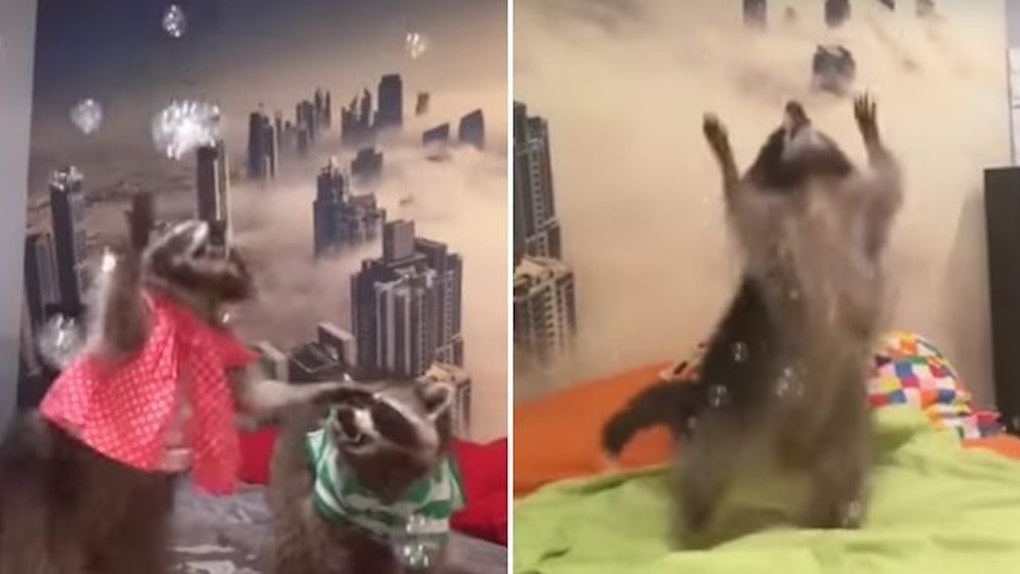 Raccoons can be unpredictable, little creatures.

Sure, from afar, they may seem cute and cuddly, but the reality is they'll claw your damn eyes out if you're not careful.

I know this because my uncle was attacked by a vicious raccoon a few years ago. It was described as something like this...

I'll never forget how hard I laughed when he shared his "near-death experience" with me. I wasn't laughing when I was almost jumped by a pack of raccoons in Beverly Hills one night, though.

You get the gist. I'm biased when it comes to my take on raccoons. THEY'RE EVIL (not all of them)!

All of that changed after checking out these hilarious videos of two raccoons playing with bubbles. They just look so peaceful and harmless. I immediately decided to wash away my beef with these particular Procyonidae.

YouTube RM Videos uploaded not one, but TWO minute-long clips of two chill raccoons playing with bubbles while Blue Swede's "Hooked on a Feeling" plays in the background.

Shockingly, this might be the cutest thing I've seen in a while!

Here's the hilarious clip of raccoons playing with bubbles.

Wait... Don't they remind you of Bill Clinton having the time of his life with balloons at the 2016 Democratic National Convention?

I'll admit, it's like a breath of fresh air to see these little creatures not rummaging through someone's trash and intimidating innocent bystanders as they hiss uncontrollably.

I guess the only way to survive a raccoon attack is to keep a bottle of Gazillion Bubbles in your backpocket. I'd even suggest investing in a bubble gun. My uncle would agree.

If you don't have emergency bubbles on you, at least cover your eyes and curl up in fetal position if you love your life.

Citations: If Raccoons Had Proms, They Would Probably Look Like This (People)