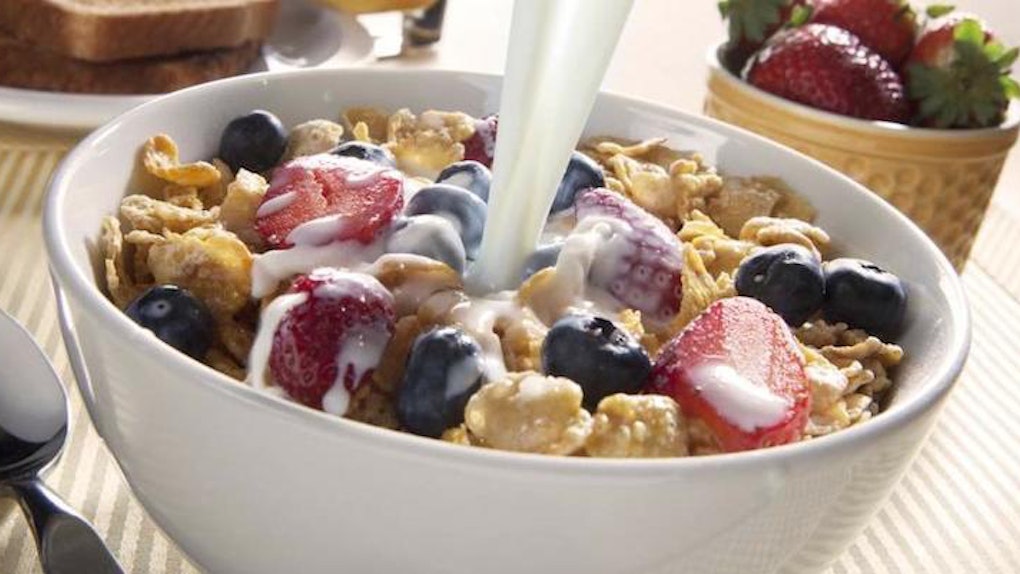 WTF? A Lot Of People Apparently Eat Their Cereal With Ice Cubes

We've seen enough evidence to fill the Grand Canyon or Julia Roberts' mouth. We get it.

Please, God, stop sending us reminders. Honestly, it's getting old at this point.

You see, Twitter blew up with yet another example of why people are crazy and should not be trusted.

I'm sorry you had to hear about it like this, really I am. But, people are putting ice cubes in their cereal.

It all started when this person asked this question to the nameless masses of the Internet.

Am I the only one that can't eat cereal without ice cubes?!! pic.twitter.com/jr0erHJTvu — corrina (@Vidarrina) June 11, 2015

Most people retweeted it because it's an example of how stupid and weird people can be when left to their own devices.

But, it turns out lone wolf had an entire ice-loving pack out there.

Tons of people do this...

Late night snacking. And yep that is an icecube in my cereal, gotta have it!! #icecold pic.twitter.com/5jg48YfC5c — Mari&Nina's_MOM (@scars_no_tatts) September 18, 2013

...because people are crazy.

Let me give you some advice: When you are in a room full of people, you have to be on guard because they are dangerous and unpredictable.

So stoned I just put ice cubes in my cereal so the almond milk would be extra cold pic.twitter.com/86gTRpe85K — chelsea (@chelseaelaynne) September 3, 2014

They say they do it because they want their milk to be "cold." Refrigerators do that, you filthy Satanists.

Just tried ice cubes in my cereal always wanted to & it was pic.twitter.com/QxkxlYNatt — PurpleDragon_s2 (@Ashh_s2) January 24, 2015

What's next? Milk in your wine? Gasoline in your toothpaste?

Where does it end?

Citations: Thanks to the Internet People Who Put Ice in Their Cereal Are Realizing Theyre Not Alone (TIME)