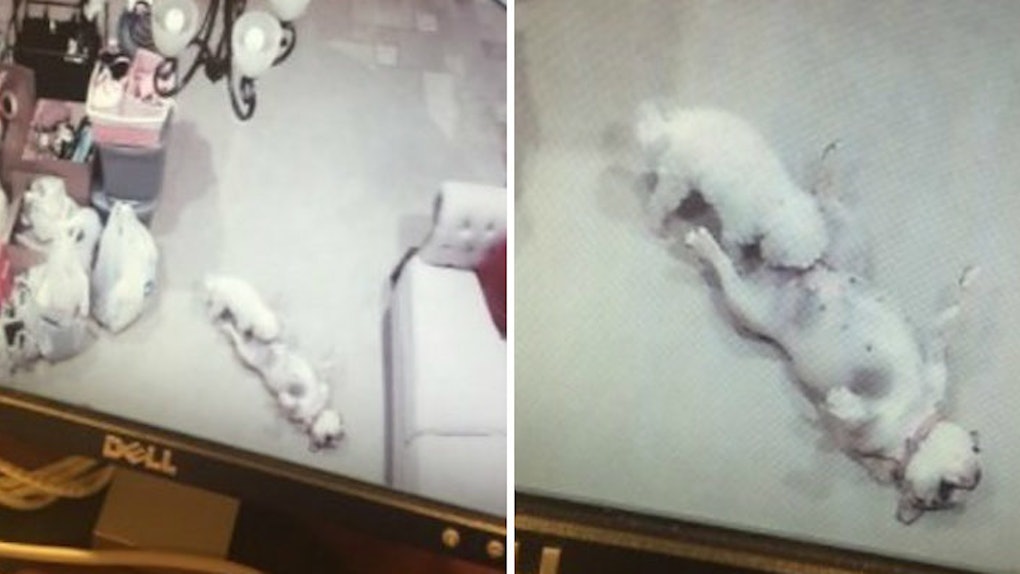 Mom Catches Dogs Having Sex And The Pics Are Scarring

This summer, a film called "The Secret Life of Pets" was released in theaters all across America.

A.O. Scott, the esteemed film critic for the New York Times had this to say about the feature film:

The Secret Life of Pets is adequate animated entertainment, amusing while it lasts but not especially memorable except as a catalog of compromises and missed opportunities.

He mentions the film's "missed opportunities."

Perhaps what he meant is that there was a clear opening for one dog to eat the other dog out a lot while their owners are away.

That would've been, we can all agree, extremely memorable.

Alas, as always, we must turn to non-fiction for our most compelling tales.

Let me introduce you to our stars.

Meet Chloe in her debut role:

And her co-star Chico:

Let me set the scene.

Partial owner of Chico and Chloe, a teenager named Jonny, threw a party while his parents were out of town.

Clearly, Jonny is a film buff.

Sadly, Jonny's mother promptly discovered her son's misconduct, and Jonny "got in trouble."

"Getting it trouble" used to mean you got yelled out, now if I "get in trouble" I have to go to court and lie about where I peed.

Anyway, to make sure nothing like this ever happened again, his mother installed a camera in their home.

Yes, this is a found footage film. Very much like the "Blair Witch Project".

Jonny soon received this text from his mother.

It is a little blurry, so I will provide you with a transcript:

MOM: "That's it we're getting the dogs neutered." JONNY: "What the hell why?"

His mother explained with a photograph from the surveillance camera she had set up.

They say that a picture is worth a thousand words, and I have never believed "them" more than at this moment.

So let us take a closer look at these two secret lovers.

Ah yes, Dostoyevsky himself would fall ruefully short in capturing the gravitas of pleasure captured in this image of two dogs, from different breeds, very much like Romeo and Juliet of yore, dog-slobbering on each other's reproductive organs.

From the Sharks to the Jets, to the Capulet's and Montague's, to the Bieber's and Gomez's, human history has been rife with those who worship at the alter of tribalism and endeavor to prevent true love.

It was beautiful while it lasted, Chico and Chloe. Poets will write of your forbidden love.

In fact, I feel compelled to pen a poem in their honor.

Puppy love By Alec MacDonald Chico and Chloe, your love is like a bright star floating, shimmering in the night sky's black pool. It shines its spotlight on all their hearts of tar, it warms the souls of the lost and the cruel. Never forget that passionate early afternoon when the humans fulfilled their quotidian duty. But if remembrance proves difficult, look at the full moon ...and recall those simple days when Chico ate Chloe's coochie.

Jonny shared the beautiful images on Twitter, so that others might revel in the gravity of their romance.

Lmao my mom got cameras in my house and she was re watching the videos to see what our dogs do while we're gone and now she's pissedpic.twitter.com/4FEBJbK7Ko — Jonny Calderon (@Jonny_Calderon_) November 18, 2016

Thousands retweeted and favorite the post, proving, once in for all, that even during these difficult times, love is everlasting.