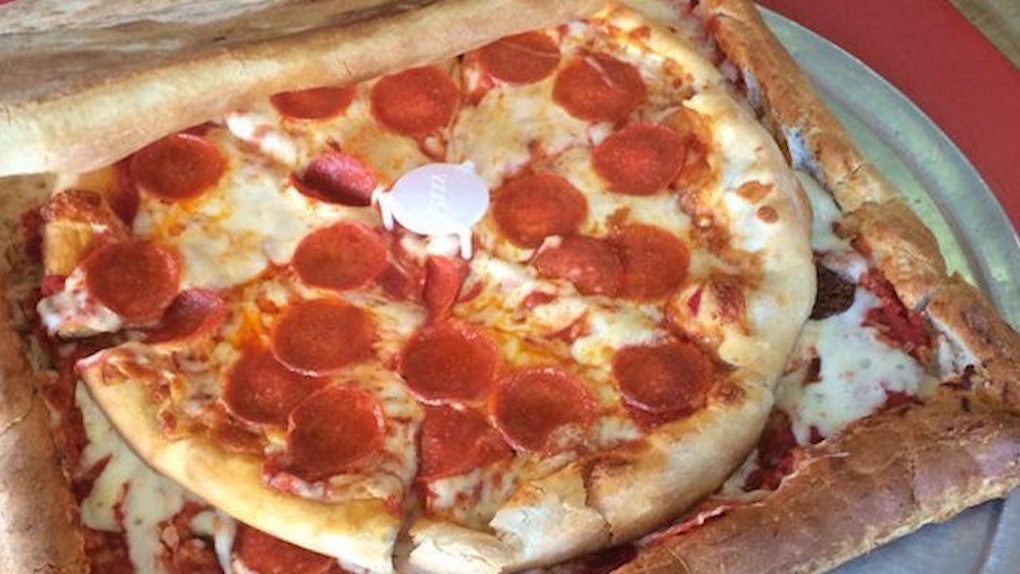 There's no such thing as having too much pizza.

A while back, we showed you a heavenly pizza-stuffed pizza topped with bagel pizzas.

If you thought that culinary masterpiece was the greatest pizza creation of all time, you might want to brace yourself.

We just found a new form of pizza-ception that's even more mind-blowing.

Created by Sean Berthiaume, co-owner of Vinnie's Pizzeria in Brooklyn, this epic food invention features a pizza that comes in an edible box made out of, you guessed it, more pizza!

Yeah I know, it's pure genius.

Apparently, Berthiaume noticed a lot of customers would order a pizza in a box, eat the entire thing and then toss the cardboard box in the trash.

Since this is pretty wasteful, Berthiaume decided to take a "green" approach to his pizza packaging and created a box that lets his customers have their pizza boxes and eat them, too.

Vinnie's Pizzeria posted a photo of its Pizza Box Pizza on Twitter, and as you can imagine, people are clearly losing their damn minds over this delectable dish.

Check out the pictures below for a closer look at this insane pizza.

Feast your eyes on the almighty Pizza Box Pizza.

Introducing The PIZZA BOX PIZZA! A pizza box made entirely out of pizza! No waste, 100% pizza and 100% delicious. pic.twitter.com/2KxxndlK4Z — Vinnie's Pizzeria (@vinniesbrooklyn) April 27, 2016

Created by the co-owner of Vinnie's Pizzeria in Brooklyn, New York...

This clever creation features a pizza that comes in an edible box made entirely out of more pizza...

...and there's no denying this box looks downright delicious.

@vinniesbrooklyn That crust looks amazing on the box. I'd eat that box — James Friedman (@JamesFriedman7) April 29, 2016

This $40 pizza box is basically three separate pizzas combined into one, and the lid consists of dough that is coated in oil and garlic and baked to perfection.

This isn't the first time Vinnie's has committed some serious pizza-on-pizza crime...

...but if you ask me, this badass box is certainly the best idea yet.

Vinnie's posted a picture of its glorious pizza packaging on Twitter...

...and, as you can imagine, this box became an instant Internet sensation.

Now people are basically losing their sh*t over the Pizza Box Pizza.

While some people simply commended Vinnie's for its ingenuity...

@crashedpc @vinniesbrooklyn Wtf is this glorious monstrosity and why isn't it in my kitchen? — Jackie Dallas (@JaxDallas) April 28, 2016

Others begged for overseas delivery...

@vinniesbrooklyn do you deliver to London? — Garrick Northam (@TheR1CK5TER) April 29, 2016

...and asked Vinnie's to open up pizzerias across the country.

@vinniesbrooklyn @Peeverson WHY DOES THIS PLACE HAVE TO BE IN BROOKLYN. OPEN TEXAS BRANCHES IMMEDIATELY AND YOU CAN HAVE ALL OF MY DOLLARS. — Digital Dingbat (@DDingbat) April 29, 2016

But I think this tweet perfectly sums up how we all feel about this delectable pizza box.

So yeah, if you're looking for me, I'll be in Brooklyn.