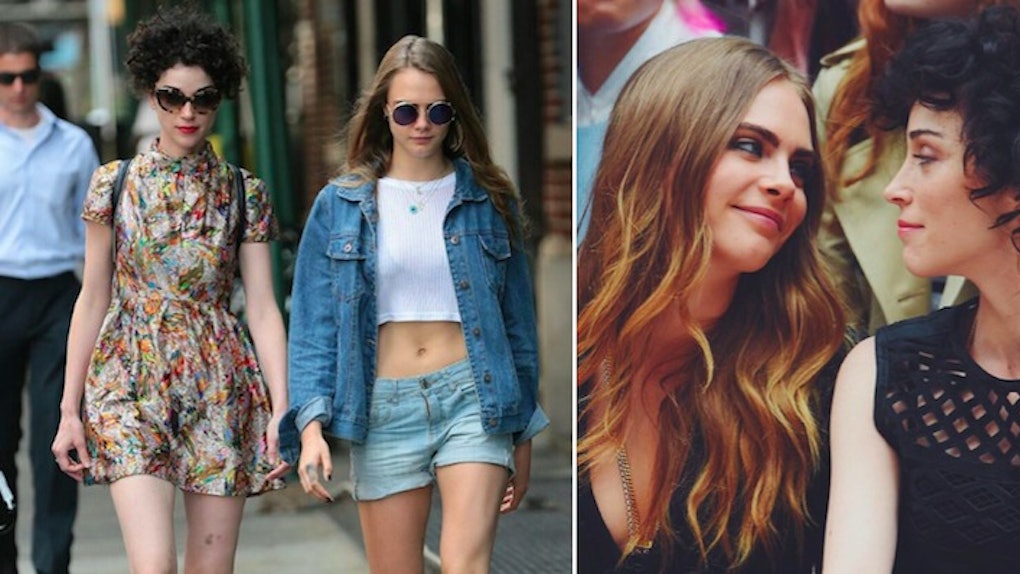 Not too long ago we introduced you to  Kate McKinnon and Marla Mindelle.

Well, it turns out those lovely ladies aren't the only cute couple in the limelight these days.

That's right. When it comes to being one of the hottest couples around, Cara Delevingne and her musician girlfriend are also bringing some serious competition.

Delevingne has been dating Annie Clark, known as St. Vincent in the music world, since March of last year and it's not hard to see these two were made for one another.

Aside from being insanely good looking, Cara and Annie share an impeccable sense of fashion and both have some seriously impressive eyebrows.

But the thing that makes these two really stand out is the fact both of these badass ladies and are known to be pretty f*cking strange.

So they're obviously a match made in weirdo heaven.

In fact, Delevingne even told Vogue,

I think that being in love with my girlfriend is a big part of why I'm feeling so happy with who I am these days.

Yep, it's not hard to see these two are the epitome of true love and when it comes to flexing some serious #RelationshipGoals we can all learn a few things from Cara and Annie.

Take a look at the pictures below to see this cute couple.

Cara Delevingne and Annie Clark have been dating for almost a year now...

...and might just be one of the most adorable couples in Tinseltown.

But then again that shouldn't come as too much of a surprise...

...considering Annie and her supermodel girlfriend are both drop-dead gorgeous...

...that is just as strong as their eyebrow game.

It's not hard to see these goofballs make each other incredibly happy...

...and always seem to be laughing about something together.

Plus, these babes are both pretty badass...

Cara and Annie are never afraid to be themselves around each other...

...and it's pretty obvious they're captivated by one another's quirky personalities.

I mean, seriously, just look at the way they stare into each other's eyes.

If that's not true love, I don't know what is.