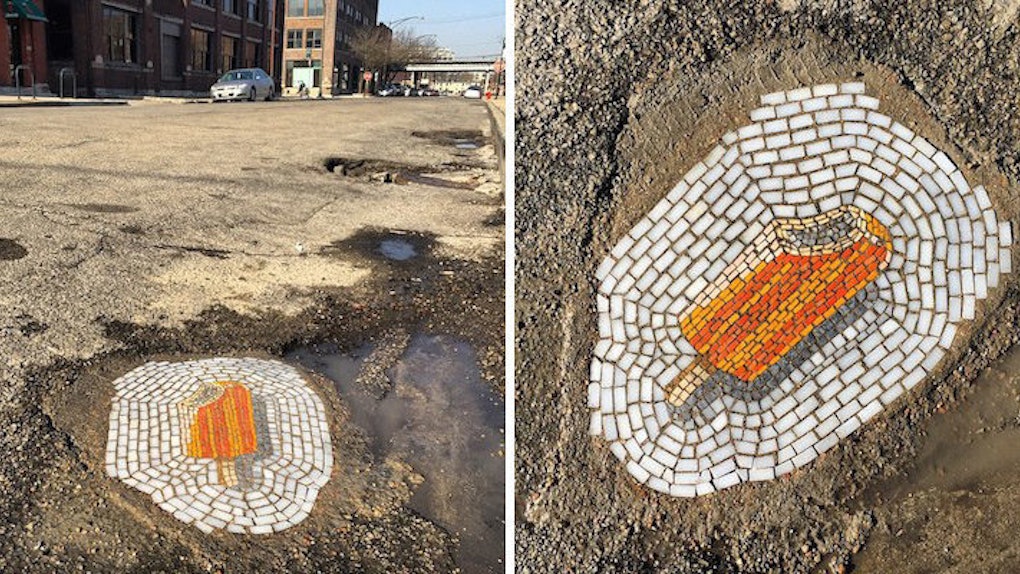 If you live in a major city, you know that over time, the infrastructure eventually wears down. It's just part of life on the bustling streets of places like New York City and Chicago. Fortunately, people are finding ways to make potholes useful.

Take Jim Bachor, for example. The Chicago-based man is using his artistic techniques to brighten up the ruins on the streets of his city. Instead of drawing penises around the potholes, he decided to do something much cooler.

Bachor fills the potholes with vibrant, eye-catching mosaics made of marble and smalti.

Jim Bachor found a way to use his art to help his city's battered streets and roads.

After creating pieces of art, Bachor puts them in his suitcase and hits the streets of Chicago.

He begins placing the pieces in potholes known to destroy people's cars.

If that's not community service, we're not sure what is.

He created the Firecracker pop from our childhoods.

He also managed to craft a Creamsicle.

Aren't these Rainbow Pops perfect for the hot summer weather?

And how could anyone resist looking down and seeing a chocolate ice cream sandwich?!

Just in case you're not a chocolate fan, Bachor made sure to make a vanilla soft-serve ice cream cone piece.

There's even mint chocolate chip soft-serve in a waffle cone!

And finally, the Green Apple Popsicle. If you didn't eat these growing up, you can find them in a pothole on the streets of Chicago!