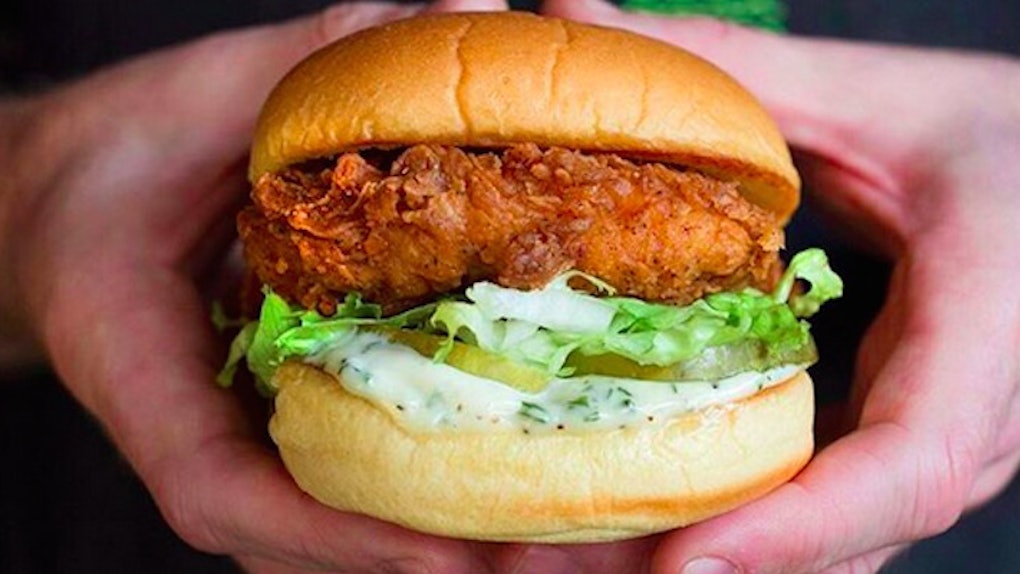 Ladies and gentlemen, boys and girls, it's official: Shake Shack has finally opened its doors in the wonderful city of Los Angeles for the very first time.

What originally started out as a food cart serving hot dogs at New York City's Madison Square Park in 2000, eventually made its way to cities like Miami, Chicago, and Washington DC.

The fast-casual burger chain then went international with Tokyo and London openings.

Despite all of these great, successful location openings, there was one in particular that never really came about - until now. On March 15, Shake Shack opened its doors in Los Angeles and your digestive system couldn't be happier.

The best part? They brought a new burger with them and whole lot more.

Here are 8 good reasons why you need to visit LA's first-ever Shake Shack:

You can finally compare In-N-Out and Shake Shack in a full-on taste-test battle.

Your food-porn dreams are coming true, foodies of LA.

You can now do what no one has ever done before - stop at the drive-thru, order In-N-Out and head directly over to Shake Shack to see which burger chain your tastebuds love the most.

Despite the fact that they're each masters at what they do, a burger is a burger and this is a greaaat excuse to scarf down two signature burgers, from two different burger places, in one sitting.

There is plenty of free parking.

If you're used to dining at one of Shake Shack's many New York City locations, you know that finding parking is absolutely impossible and that could be an incredibly volatile situation if you're already "hangry."

The chain's new West Hollywood location offers tons of free parking so you can stuff your face for as long as you'd like without worrying about your car getting towed.

All that's left as far as customer convenience is concerned is a line cam that allows patrons to view how long the line is for Shake Shack before showing up!

Looking for a quick, easy after work happy hour fix? Why not venture over to Shake Shack and order up one of the many beer or wine selections offered on the menu?!

If there's any reason to drop by Shake Shack and "accidentally" order too many burgers and cheese fries, it's because you "accidentally" got wasted at your new favorite burger spot.

Shake Shack offers a wide variety of beer as well as its own red and white wines. Cheers!

The dessert menu is to die for.

Name a quality fast-casual burger chain that offers shakes, soft-serves, custards and treats for your dog?!

After you're done inhaling your meals, you'll find yourself contemplating whether or not you should stand in line again to order a Shacky Road frozen custard or a hand-spun chocolate milkshake.

The answer is yes. As a matter of fact, you should just order one with your meal. Save yourself the time!

The 'Shroom Burger is essential.

You can't really call yourself a "foodie" if you've never had the pleasure of munching on a 'Shroom burger from Shake Shack.

If you're ever indecisive about what to order from the Shack, go with the 'Shroom!

The staff members are awesome and helpful.

You'll notice that all Shake Shack staff members are happy and ready to help satisfy your hunger. This is even more apparent at the restaurant's newest location in Los Angeles.

Feel free to ask for menu suggestions and dessert guidance (yeah, that's a thing) from any of the staff members wearing Shake Shack t-shirts. They will never, ever steer your wrong.

There are new menu items you can't order anywhere else.

What's the point of opening up a new location if you're not going to come bearing gifts?

Evidently, Shake Shack got that memo because they showed up on LA soil with plenty of new menu items to offer that you can't order at other locations.

Not to mention Shake Shack is working with local Los Angeles-based bakeries and shops to use their ingredients to craft frozen custards and milkshakes.

Now that's how you become the coolest new kid on the block!

You can try the all-new "Roadside Double" burger exclusively at the Los Angeles location.

Last, but not least, is the all-new "Roadside Double" burger exclusively offered at all Los Angeles-based Shake Shack locations.

Even if you've been eating Shake Shack since the early 2000s, there's still something on the menu that you have yet to try and this is it!

The new burger features swiss cheese, dijon mustard and simmered onions, all nestled between two patties. The best part? It's unique to the wonderful state of California.

So, what are you waiting for? Head over to Shake Shack's newest location at 8520 Santa Monica Boulevard and go absolutely insane. Order all the shakes. All the custards. All the burgers.

Oh, and don't forget the flat-top hot dogs. After all, that is how Shake Shack got here in the first place!