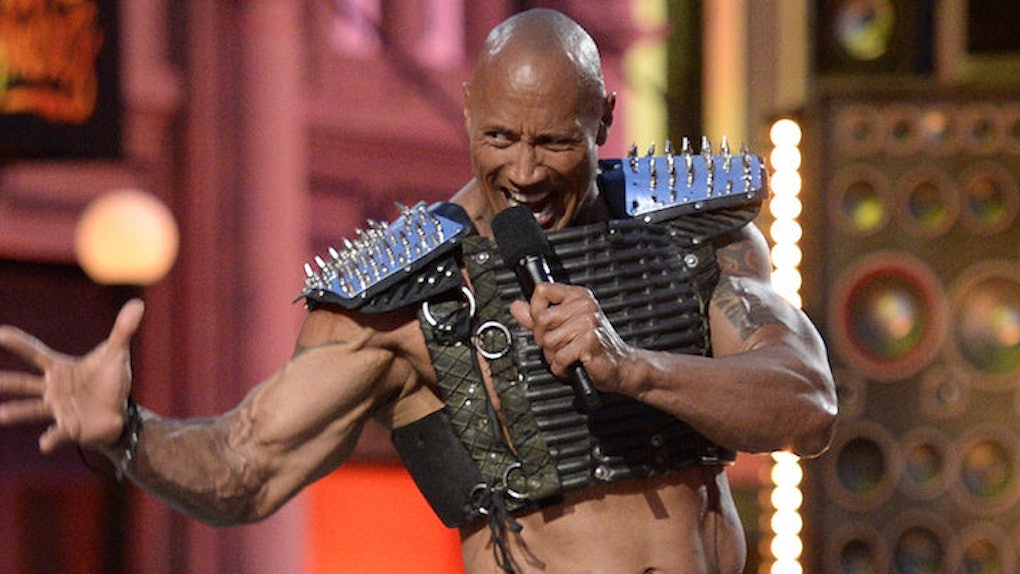 How To Be As Sexy As The Rock, People's Sexiest Man Alive

On top of being a singer, actor and a WWF fighter, Dwayne "The Rock" Johnson can now add "Sexiest Man Alive" to his already impressive resume.

The big news was revealed on Tuesday's episode of "Ellen," where she gave us a hilarious recap of his journey toward sexiness.

She called it, "Dwayne 'The Rock' Johnson: The Evolution of a Sex Symbol."

I'm not going to lie, The Rock wasn't always the first person I thought of when the word "sexy" came to mind.

But that "Ellen" segment (although it was a joke) made me see Dwayne in a new light.

What is it about him that I (and apparently the rest of America) find so appealing?

I mean, I can't speak for anyone else, but for me, it's his effortless swag.

He's the kind of guy who will still have something hot about him, even if he decides to rock this mustache again:

He's like that funny, big guy in the cool frat no one thought was attractive, but still managed to get all the hottest girls... and then, he graduated college, grew into his hotness and everyone went "Ohhhhhh, I see it now."

And you know what? If you're a man who's trying to appeal to anyone, that guy is the guy you want to be.

You want to be the guy who's bringing more than just looks to the table.

So, here are some tips from me to you on how you can be more like the Sexiest Man Alive:

Pro tip: Trying to be someone you're not is never attractive.

And The Rock knows that.

He admits becoming totally confident with himself took some time. "I was unsure of who I was and who I wanted to be," he told People.

But he's finally gotten to the point where he's ready to show his fans his true colors, both on and off screen:

I think with a lot of my fans, I've gotten to a very, very cool place where there's a direct line between the man they know off-screen and the man they see on-screen.

Don't take yourself too seriously.

Anyone who's seen any of his movies knows The Rock is a TOTAL goofball.

In fact, in the same interview with People, his first tip in Sexiness 101 was having a "sense of humor."

Moreover, he noted, "I think probably just not trying to be sexy and just being cool and confident in your movies" is a big contributor to his effortless swag.

I'd say The Rock is definitely cool and confident in real life.

I mean, you guys... he posts funny memes making fun of his own awkward phase.

If that's not true confidence and a fantastic sense of humor, I don't know what is.

Be a good dad.

The Rock has two daughters, and he LOOOOOOOOOVES them. Like, a lot.

I mean, seriously. One scroll through his Instagram and it's obvious his sun sets and rises with these two ladies.

And you know what? THAT IS SEXY.

He's not just some schmuck who's gonna leave the mother of his child to do all the work on her own.

No, he's a MAN who's going to stick around and show his daughters the kind of love and respect they deserve.

His daughters and girlfriend aren't the only ladies The Rock is obsessed with.

He flies home for her birthday, buys her new cars like they're candy and posts almost more Instagrams about her than he does about his movie releases.

You just know a guy who loves his mom that much knows how to treat a lady.

Take care of your skin.

On what it takes to become the sexiest man alive, The Rock told People with a laugh, "It starts with the skin."

I mean, look at this flawless face. Clearly, this guy cares about a good skincare regimen.

Next time you want to be lazy about washing your face, look at that picture and remember these wise words from our boy:

“We've only got one face. You've got to take care of it. So, I exfoliate.”

I don't think there's anything less sexy than a guy with no ambition or drive.

You know who wants to boink that guy sitting on the couch wasting his life away smoking doobies and playing video games? Nobody.

You know who wants to boink that ambitious guy who's the hardest worker in the room? Everybody.

The Rock is a self-proclaimed hard worker, and his wild success goes to show he's the kind of guy who will work until he gets what he wants.

The Rock knows who he is, and as a result, his fans know who he is.

And that all comes through in his movies and gives him the effortless confidence I mentioned earlier.

But part of knowing who you are is knowing where you came from and remembering your entire journey.

The Rock isn't ashamed to admit he wasn't always this heartthrob stud. No, he knows where he came from and he's not afraid to share his journey with the world.

THAT IS SO FREAKING HOT.

Yeah, I mean... this obviously helps, too.