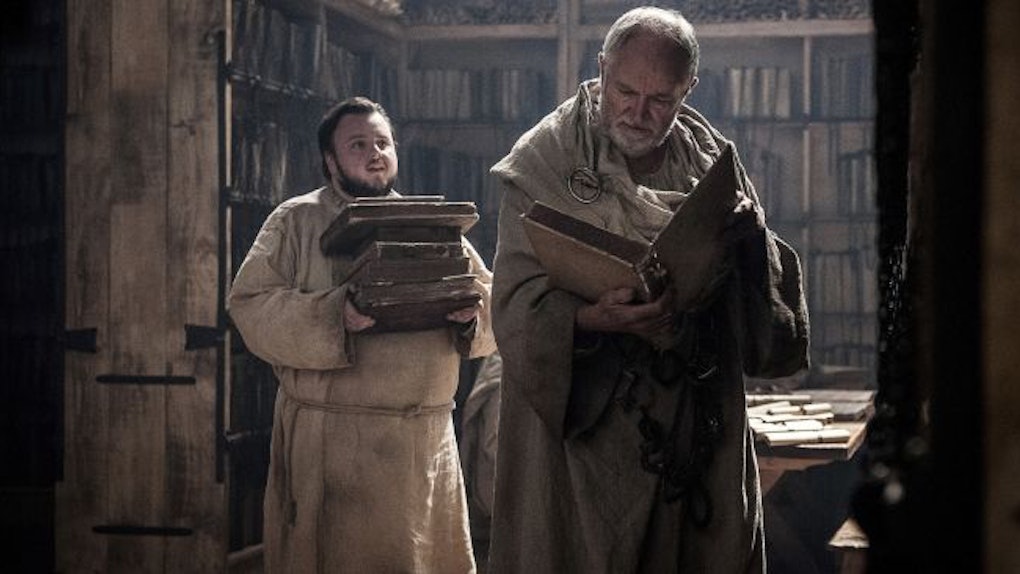 This post contains spoilers from "Game Of Thrones" Season 7, Episode 2.

Last week's return of Jorah the Explorah was a shocker. Fans assumed Lyanna's wayward uncle Jorah would find his way to a cure either in Essos somewhere, the Islands of Skagos that lie between Essos and Westeros to the north, or back home on Bear Isle.

Instead, Jorah showed up in the last place we would have thought: The Citadel, and Jorah and Sam are giving us a new greyscale theory on Game of Thrones to worry about. Now it's not that far a stretch for Jorah to head over there. After all, they advertise themselves as "the sum of all knowledge." If anyone might have a cure on hand, it would be this place, probably in one of those books that are on the inside of the gated area Sam's been breaking into.

What Jorah didn't take into account is that his grayscale would start rapidly taking over his body after he left Dany, or that the Maesters, being jealous of their knowledge, rather than attempting to help, would throw him into a cell to rot.

But sadly, as we discovered last week, that's exactly what happened. The only saving grace? Jorah is in contact with the only open-minded human being in the whole damn place, Samwell Tarly.

Will Sam put together Jorah's request to know if Dany has arrived in Westeros with the arrival of Daenerys Targaryen in Dragonstone? We already know that this is a place that has Sam's attention. This is a man who can go to Dany and tell her about the White Walkers in the North, and that she must arm her forces with the dragonglass below the castle.

But that's not why Sam's going to do it. He's doing it because of Jorah's father and his memories of a decent man, and because Sam is a decent man.

There's just one problem: First, they gotta cure him. And though Sam has in fact discovered a cure that has worked, it doesn't *always* work. Moreover, those who attempted to cure grayscale patients caught the disease. So nowadays, it's banned. And Sam's Maester boss has no interest in hearing any arguments booked into unbanning it, not even a tiny bit.

It speaks to how much Sam has changed over these past seasons and his desperation that he disobeys the Maester in such a direct manner.

But will his plan succeed? Or will Sam find himself going from delivering food to these cells of the terminally ill to being inside one himself?

(Also? DAAAAMN that was nasty.)