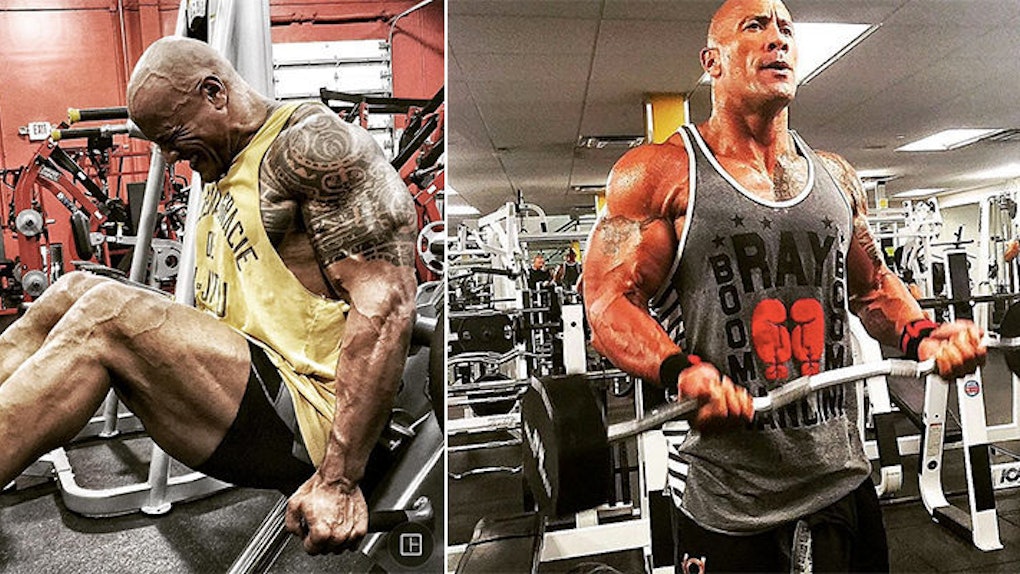 Finding motivation to go to the gym gets harder as you get older.

Did the weights get a little heavier, did you start to lose your stamina? Running? Yeah, it's a wrap for that. But the real reason you're slacking these days is that somewhere along the line, you got f*cking lazy.

So, who better to inspire your helpless ass than a man who hits the gym at 3 am and has never skipped leg day for the past two decades?

A man who eats 821 pounds of a cod a year, played the role of "Hercules" and drinks lion blood after every workout. You know who I'm talking about, dog.

Going to the gym with The Rock looks absolutely insane, and it's hard to argue anyone in show business goes harder than he does.

The Rock proved you can be in the greatest shape of your life at 43 years old.

But not everybody sees the hard work he consistently puts into it, unless you follow him on Instagram, of course.

If this is how you spend your Saturday afternoons instead of getting completely wasted at brunch...

...then clearly, this is how you spent your Friday night -- which means you're on a whole other level!

So if you want to look jacked and flex like this next time you're on a fly vacation...

...you have to buy a bunch of weighted chains and do these...

...bump some Nate Dogg as loudly as you possibly can...

...and make sure this is the only side chick you're hitting.

When going HAM in the gym, The Rock suggests consistently reminding yourself to focus...

...because if you're going to listen to anyone, listen to yourself!

Also, if you don't look this stressed on leg day, then you messed up.

But sh*t ain't that stressful at the end of the day...

That means it's time to hit the Quan!

You should always be bumping Metallica on chest day.

But eventually some of that gangster sh*t by the end of it.

The back workouts are certainly nothing to mess with.

Each rep gets harder than the last when you're adding on plates.

Enough of those and your back will be looking ridiculous.

Having a gym partner like All-Pro receiver Antonio Brown always makes you better.

But there's nothing better than an empty gym by yourself, if Ronda Rousey or Kevin Hart can't make it.

Your hands shouldn't even look like your hands after every workout...

...and your legs should be bigger than the size of an average American.

Then, you can dance in the gym without anyone saying sh*t.

Because what are people going to say when it's pretty much your gym?