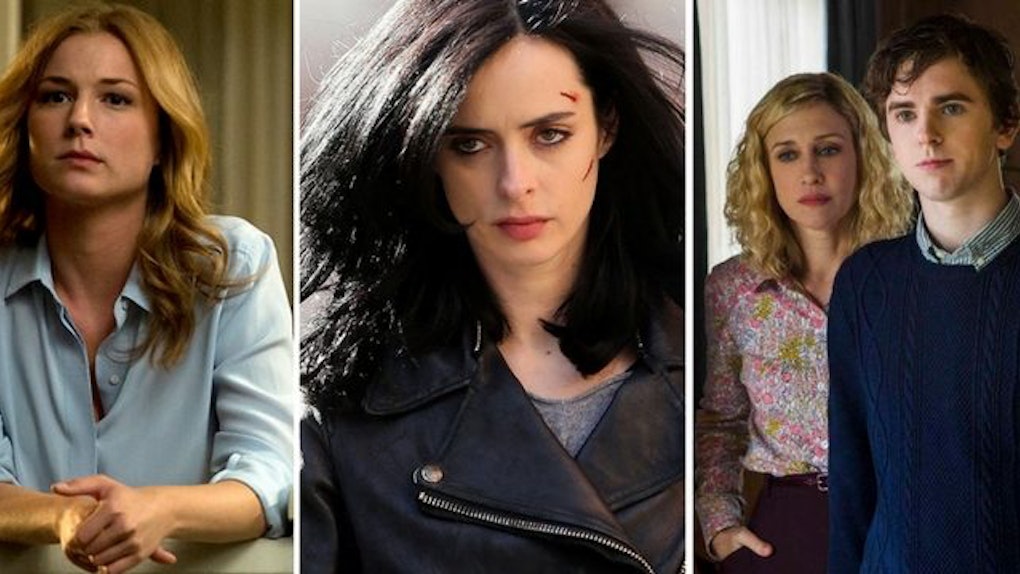 What's a "Big Little Lies" fan to do now that the big mystery has been revealed and the show might not be coming back for a second season? Start binging something else, obviously!

It's not easy to find a show that perfectly replicates the dark and mysterious, yet also funny and deliciously dramatic vibe of "Big Little Lies," but there are some great options on Netflix that can come close to captivating you in the same way.

Next time you find yourself wishing you could dive back into the mystery and drama of the Monterey moms, start up one of these Netflix-available series instead!

Luckily for everyone who loved the dark central mystery of "Big Little Lies," Netflix just released a new series that also hinges on a big, morbid mystery. Also adapted from a successful novel, "13 Reasons Why" tells the story of a high school girl who kills herself and leaves her classmate 13 cassette tapes revealing what led up to her suicide.

Perfect if you loved "Big Little Lies" for its: Dark, morbid mystery.

I don't think any show comes closer to portraying the murderous underbelly of WASP-y women in opulent, seaside mansions that made "Big Little Lies" such a hit than the bygone ABC drama "Revenge."

The four-season series follows Emily Thorne, a woman who infiltrates the high society life of the Hamptons to get revenge on the wealthy woman who framed her father for treason.

Perfect if you loved "Big Little Lies" for its: Opulent, seaside views with a side of murder.

One of the standout elements of "Big Little Lies" was how terrifyingly real the abuse storyline between Alexander Skarsgård's Perry and Nicole Kidman's Celeste felt.

Another show that has been praised for its stark and crushing portrayal of abuse — and ultimately, a woman overcoming her abuser — is the gritty superhero drama "Jessica Jones." Jessica is a superpowered woman suffering from PTSD after being in the clutches of the mind-controlling villain Kilgrave.

Perfect if you loved "Big Little Lies" for its: Portrayal of a strong woman overcoming her abuser.

Let's be honest here: the real joy of watching "Big Little Lies" was seeing the bond between these women as they fought against anyone who would try to tear them apart. And that's the exact same appeal that you get from "Charmed," the long-running supernatural drama about three sister-witches.

Piper, Prue and Phoebe discover that they have unique magical powers, and swear to work together to fight against the forces of evil.

Perfect if you loved "Big Little Lies" for its: Fierce sisterhood.

Admit it: you were hooked on "Big Little Lies" in episode one because you just had to know who died at the trivia night and who the killer was. In exactly the same way that "Big Little Lies" employed flash-forwards to the aftermath of a grisly murder to keep us glued to our screens, "How to Get Away with Murder" reveals a shocking character death at the beginning of each season, and then takes us back in time to tell us how the murder went down.

Perfect if you loved "Big Little Lies" for its: Murder-mystery story structure full of flashbacks and flash-forwards.

Everything in Monterey seemed so perfect from a distance, but beneath the Ann Taylor Loft surface, there were some pretty messed up things going on. The same can be said for the Bates Motel, which houses a mother and son who seem nice and normal enough... until you really get to know them.

Perfect if you loved "Big Little Lies" for its: Normal-seeming world with a super-creepy underbelly.

Marital strife is at the center of "Big Little Lies," and although the show often opted for a dramatic portrayal of difficult relationships, it did manage to pepper in a healthy dose of comedy — nearly always courtesy of Reese Witherspoon's hyper-ambitious Madeline Mackenzie.

Likewise, Bravo's dramedy "Girlfriends' Guide to Divorce" follows a group of female friends dealing with the messy aspects of their failed relationships.