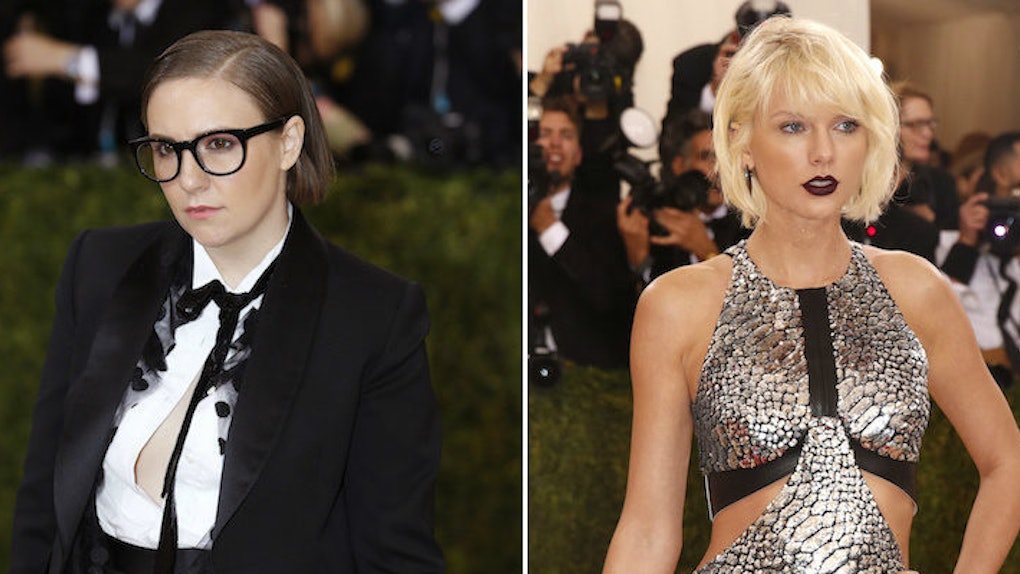 After Kanye West dropped his latest music video, "Famous," on Friday, lots of celebrities had to comment on it. I mean, there are images of naked celebs from Taylor Swift to George W Bush in bed together. If Kanye West didn't intend to piss people off with that imagery, then he clearly doesn't know the first thing about human behavior.

Lena Dunham did not hold back at all when it came to expressing her opinion of the music video. Let's just say she did not think it was good. In a Facebook post, Lena Dunham wrote in no uncertain terms,

I can't watch it ... if it feels informed and inspired by the aspects of our culture that make women feel unsafe even in their own beds, in their own bodies.

She went on to raise some seriously valid points, saying,

Let's break it down: at the same time Brock Turner is getting off with a light tap for raping an unconscious woman and photographing her breasts for a group chat ... As assaults are Periscoped across the web and girls commit suicide after being exposed in ways they never imagined... While Bill Cosby's crimes are still being uncovered and understood as traumas for the women he assaulted but also massive bruises to our national consciousness ... Now I have to see the prone, unconscious, waxy bodies of famous women, twisted like they've been drugged and chucked aside at a rager?

She then went on to defend some of her female role models in the entertainment industry, writing,

I know that there's a hipper or cooler reaction to have than the one I'm currently having. But guess what? I don't have a hip cool reaction, because seeing a woman I love like Taylor Swift (fuck that one hurt to look at, I couldn't look), a woman I admire like Rihanna or Anna, reduced to a pair of waxy breasts made by some special effects guy in the Valley, it makes me feel sad and unsafe and worried for the teenage girls who watch this and may not understand that grainy roving camera as the stuff of snuff films.