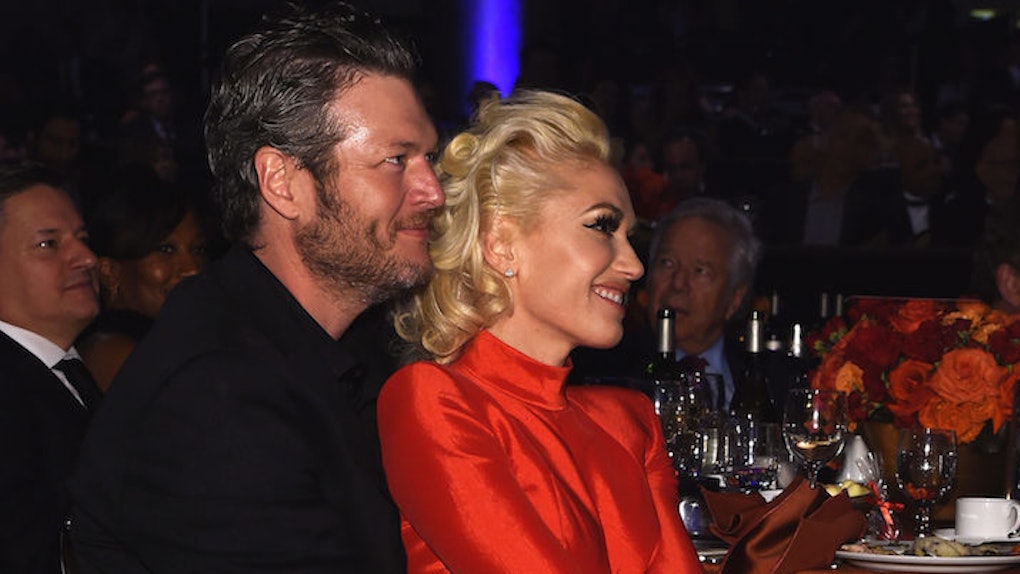 As many of you may know, Gwen Stefani filed for divorce from ex-husband Gavin Rossdale last year. Allegations were floating around that Rossdale cheated on Stefani with their nanny (as for why the F*CK anyone would cheat on Gwen Stefani, I’m short on answers. I just know the facts).

In a recent interview about her new album, Stefani was asked to divulge some information about her new single “Make Me Like You,” a tune about falling in love again. This was her response:

"I think that when you go through what I went through, or what I’m still going through, you think you’re hopeless. You don’t know what’s going to happen. You panic. It was a really super-unexpected gift to find a friend, somebody who happened to be going through the exact same thing as me, literally mirroring my experience. I don’t think it’s an accident that that happened. It saved me."

Unfortunately, Stefani isn’t referring to her album as her savior in this context. She’s referring to Blake Shelton.

At the time of Stefani’s divorce, Shelton was going through a divorce of his own from Miranda Lambert. It seems Stefani and Shelton latched onto each other at the most convenient time (or inconvenient, depending on how you look at it) in their lives: literally RIGHT after they just finalized their divorces.

I'm all for true love; I'm a hopeless romantic, for Christ's sake. But I have a problem with the way Stefani described Blake coming to her rescue, so to speak. To be completely frank, I’m disappointed more than anything else. She's been a role model of mine for so long, and I find myself asking the question: Why does anyone but Gwen Stefani need to save Gwen Stefani?

If Gwen Stefani can't even save herself, does that mean that after my hypothetical future divorce, I wouldn't be capable of saving myself?

Blake isn't Superman. He isn't a knight in shining armor (what man is?!). He's a country singer who happened to be in the right place at the right time, and Gwen is a badass pop star. This same Gwen is telling us she needs a man to validate her worth? The frontwoman of No Doubt, the creator of the L.A.M.B. fashion line (remember that?), the woman who created a brilliant line of lipsticks? (I own a shade myself and can attest to its perfection.)

What was Gwen trying to imply here? That she’s too weak to make it through a breakup on her own? That her fame, new album and close circle of friends and family aren’t enough to carry her through her dark time? Hell, that she isn’t enough to carry herself through her dark time? Shouldn't she be empowering people everywhere by letting them know she survived by saving herself -- Blake or no Blake -- rather than crediting a relationship for her survival? Codependency isn't romance.

Maybe I'm not very empathetic. When I was in the throes of my life-altering breakup, I turned solely to writing as my savior. I saved myself. So you can see why I’d think Ms. Stefani is sending the wrong message to young girls across the world about heartbreak, recovery from heartbreak and self-worth.

Not to mention that her contentious concoction of words also gets me wondering about how Blake would describe how his decision to couple with Stefani affected his life. Would he say the same about her? That she "saved" him?

But to each her own, I guess.