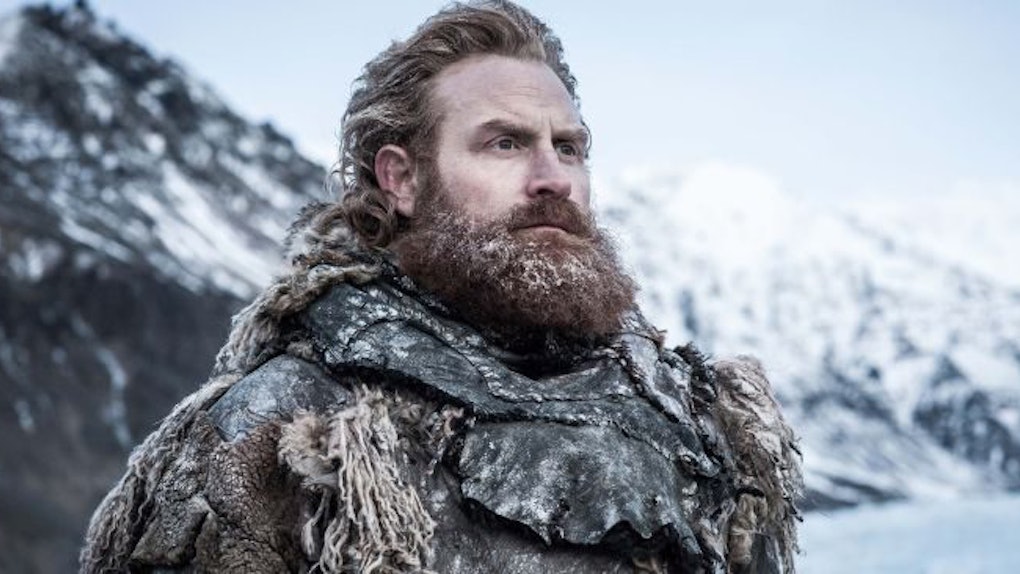 Tweets About Tormund's Death On 'Game Of Thrones' Are Heartbreaking

It's just not a Game of Thrones season finale without a major character death, right? Well, fans aren't exactly sure if one of the most beloved characters in the series actually did meet his fate at the end of Season 7 or not, but the deadly cliffhanger was just too emotional to handle. Spoiler alert: Don't read on until you've finished the Game of Thrones Season 7 finale. As the undead Viserion blasts down the Wall with (admittedly, very cool-looking) plumes of blue fire, it looks really unlikely that Tormund, Beric, and the rest of their wildling allies are going to survive. Though we haven't seen him die yet, Twitter is already mourning the possible death of Westeros' favorite redhead, and these tweets about Tormund's death are equal parts heartbreaking and hilarious.

Over the course of the past five seasons, Tormund grew from a threatening villain to a surprising fan favorite after teaming up with Jon Snow and offering a bit of much needed comic relief every so often. Not to mention his ongoing flirtation with Brienne of Tarth, which evolved into one of the show's most beloved little romances... even if it did seem to be a bit one-sided. So after all of this, it's no wonder everyone in the Game of Thrones fandom was upset when Sunday's season finale ended on a cliffhanger, with Tormund trying to run away from the collapsing section of the Wall as a massive army of wights march into Westeros to finish off anyone who may have somehow survived the zombie dragon attacks.

Before the end credits even began to roll, Twitter was already in an emotional tailspin mourning Tormund's fate. Check out some of the best tweets below.

Thankfully, there's still some hope for Tormund to survive since we never say his death on the screen and he was scurrying out of the Wall pretty quickly, but I mean, zombie dragon plus an army of undead ice skeletons... not the best odds for good 'ole Tormund. And the worst part of all is that we'll have to wait until next season to find out if he survived or not! We just have to keep praying we'll see Tormund and Brienne together again in Season 8.