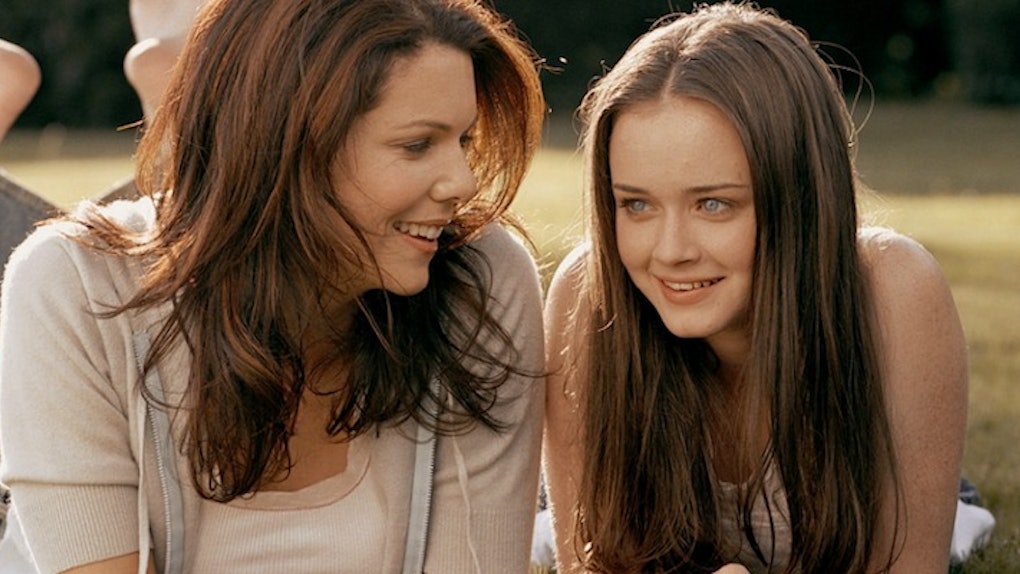 'Gilmore Girls' Helped Me Strengthen My Relationship With My Mom

If you're out on the road, feeling lonely and so cold, all you have to do is call my name and I'll be there, on the next train…

When "Gilmore Girls" first premiered, I was a mere 8-year-old girl who had just moved to a new state, started a new school and began a new life.

Toward the end of the series, I was a different person. I was a 13-year-old adolescent, navigating junior high, full of raging hormones and dealing with her parents' divorce.

It was at that time that "Gilmore Girls" became my refuge. It felt like an exaggerated, slightly edited (and slightly better) version of my own life. It was a means of handling what I was facing, while also feeling like I was escaping it all and living in another world.

Amy Sherman-Palladino's world worked for me in the way that Rory's books worked for her.

When my parents first separated, my mom and I moved in with my grandparents -- two strong pillars of light in my life, but also two people very similar to Emily and Richard. We shared a small room (and bed), and we spent almost every minute of the day together.

My mom taught at the school right across the street from mine, so we started our mornings together and ended our evenings the same way. Her school and fellow teachers became my version of the Independence Inn — a place where I felt admittedly special and strangely comfortable, surrounded by people that knew me.

My mother and I had always been close, but living in such close quarters brought us even closer. We were all each other had. Both of us going through our own tumultuous chapters of life — different, but coinciding.

We didn't much care for coffee the way the Gilmore girls did, but we could relate in other ways. We could talk about anything and we were always there for each other, no matter what.

Friday night dinners were a real thing with my grandparents. The bribing wasn't necessarily for tuition, or any other type of monetary entity, but it was there in its own way.

When Emily would criticize Lorelai (and on rare occasion, Rory), the other half of the duo would jump to the defense line. To this day, my mom defends me from my grandparents' harsh words, perhaps without the fast-paced wit, but not without the love and protective instincts.

After six long months of privacy-free living, we moved into a small condo and quickly made it our own. It was, to me, our haven (which made it especially hard to leave when the time came about six years later).

Eventually, things became comfortable and we settled in to our new life. Every Tuesday, after school, we'd sit and watch "Gilmore Girls" together. We would laugh and cry, wishing that the fictional Stars Hollow town wasn't so fictional, and ruminate on the similarities between their lives and ours.

I would have friends over all the time, because they saw our home as a “cozy” and relaxed place to be.

My mom would make snacks, just as Lorelai did for Rory and her Chilton friends — a plate of Pop-Tarts with an apple in the middle. She'd make dinner for me and my boyfriend, which wasn't quite pizza, junk food and Willy Wonka, but it was us.

Our neighbor became a good friend to my mom and served as the surrogate Sookie in my life.

Things got tough when my mom started dating again. I had to get used to having somebody new in our space, and it wasn't easy.

When Lorelai starts dating (and eventually becomes engaged to) Mr. Medina in the early seasons, the transition from the “me and you secret, special clubhouse, no boys allowed thing” to life morphing into a “mutation that we could never possibly have conceived” is a tough one.

That's the first rule of the Gilmore dating handbook: “Daughter shall be nowhere near house when said man materializes.” The rule works, but eventually needs to change and I experienced it first-hand.

Now, as a young adult, I see that while that time in the condo was a fresh start for us both, it was also a heartbreaking reminder of what once was.

My mom had to quickly become independent, raising a teenager alone, owning a home on her own and generally living life on her own. It wasn't easy, but I don't think either of us would change it for the world. I will always treasure the time we had that was just for us.

Letting other people in was a certain struggle for me, but what would Rory and Lorelai be without Luke?

At the end of the day, "Gilmore Girls" is more than just a show. It's about growing up. It's about family. It's about a mother and daughter who are undeniably and forever close — unconditional love.

The strength I have today is because of my mom. Knowing that I'll be home for Thanksgiving when the "Gilmore Girls" reboot premieres on Netflix, and that I'll be able to watch it with her, gives me the same warm feeling inside that I get listening to Carole King with a cup of coffee in hand.