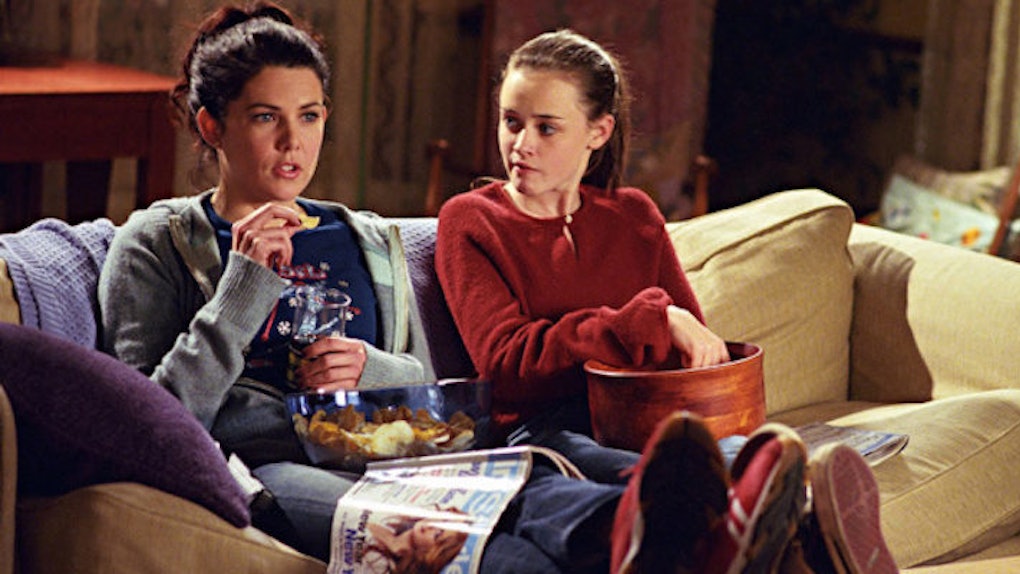 I mean, look at this photo and caption that was posted on Tuesday:

Now, a normal person might look at this photo and say, "Big deal, it's just some Pop-Tarts and an apple! They're eating snacks!"

But a TRUE "Gilmore Girls" fan will remember season 5, episode 21, "Blame Booze and Melville," when Lorelai said to a doctor, and I quote,

OK, see, I'm eating an apple. Now normally this would not be a sign of anything except hunger, except I don't eat much fruit. I know I should, but I don't have a hankering for it. I had it when I was pregnant with my first kid, though. Kept craving those apples, and this morning, boy, was I craving an apple.

Pop-Tart appetizers to hold us over 'till the pizza comes. And one apple.

Why is that apple so significant that it gets its own sentence? Uh, maybe because it REPRESENTS THE FRUIT OF LORELAI'S WOMB?!

People were already speculating Lorelai might be pregnant based on the shirt she was wearing in that teaser trailer, which says, "I'm with human."

LORELAI IS PREGNANT! OR RORY IS PREGNANT AND INHERITED HER MOTHER'S CRAVINGS! SOMEONE IS PREGNANT, I JUST KNOW IT!

And, of course, then we have all those speculations as to whether Lorelai is married or not.

Gah! I can't take the suspense!

The four-part series, "Gilmore Girls: A Year In the Life," premieres on Netflix this November 25. Thanksgiving can't come soon enough.

Citations: 'Gilmore Girls' fans think there's a major clue that someone's having a baby (Business Insider), Why Gilmore Girls Fans Think Lorelai Might Get Pregnant In The Revival (Refinery29)