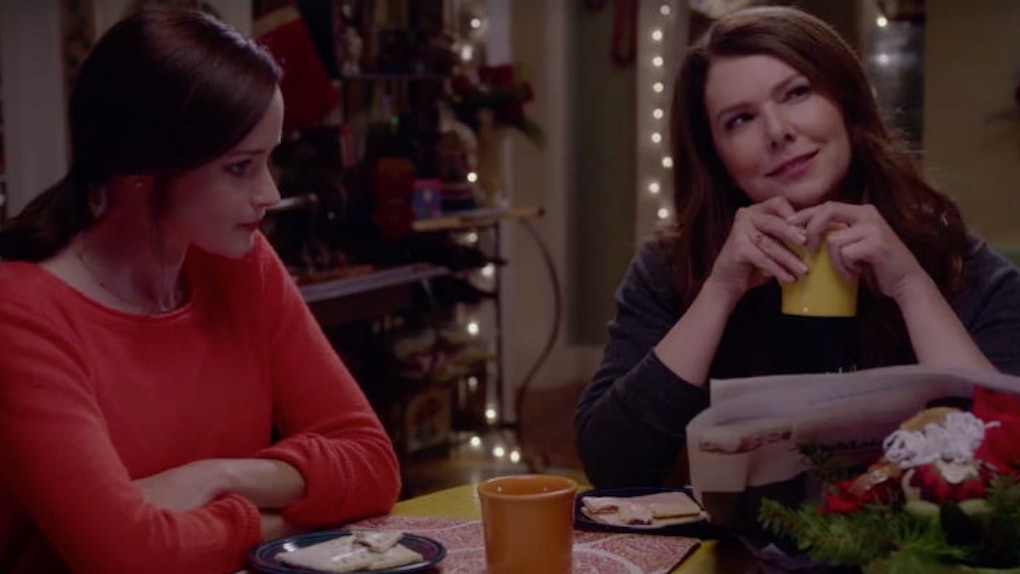 7 'Gilmore Girls' Clues That Rory Is Pregnant In The Revival

No one can stop speculating about the "Gilmore Girls" revival. Just who will Rory Gilmore end up with? Are Lorelai and Luke still together, happily ever after?

We'll find out soon, on November 25 to be exact, which is when "Gilmore Girls: A Year in the Life" hits Netflix.

But until then, fans are theorizing all the craziest outcomes and possibilities.

Namely, they want to know if is Rory pregnant and which ex is the father.

Listen, all signs point to someone being pregnant.

Realistically, it could very well be Lorelai.

But fans are pretty convinced that the one with a bun in the oven has to be Rory. US Magazine collected a number of clues as to what we can expect on Black Friday.

Our first clue: an apple.

The Pop-Tarts we get. The Gilmores love their junk. But what is the significance of the apple?

We got to season five, episode 21 and find Lorelai at the doctor's. She says,

OK, see, I'm eating an apple. Now normally, this would not be a sign of anything except hunger, except I don't eat much fruit. I know I should, but I don't have a hankering for it. I had it when I was pregnant with my first kid, though. Kept craving those apples, and this morning, boy, was I craving an apple.

So, we've already guessed that this apple means that somebody is pregnant -- is it Lorelai, or are "apple cravings" genetic?

The second clue is hidden in the trailer...

After what sounds to be a wild night, Rory asks her mother what they ended up watching. One of her guesses was "Baby Monitor: Sound of Fear."

Fans spotted something in the reflection of this compact mirror...

What else could it be? A ghost of a vengeful woman who didn't live long enough to see the revival?

Luke tells Rory what to eat?

So what if Rory wants tacos, tater tots and mini donuts?

But maybe he's concerned she's not eating healthy enough FOR THE GROWING LIFE INSIDE HER?

OK, this is in response to Lorelai making a joke about Rory taking peyote, but still... perchance this a nod to morning sickness?

Shortly after the trailer reveals that Rory is traveling around the world, Logan appears on screen. Logan, as we know, lives in London.

Did she make a trip to see him to inform him of their love child? Or is she just there for work and wanted to say a quick "how do you do?"

There may be a wedding.

One fan got to see Stars Hollow during a tour at Warner Bros. studios. While she wasn't allowed to take photos of the set, she did see this item placed on hold in the prop house!

So there you have it. The seven reasons why the internet truly believes Rory is having a baby out of wedlock.

But I swear to God... if Rory ends up with Logan, I will scream.