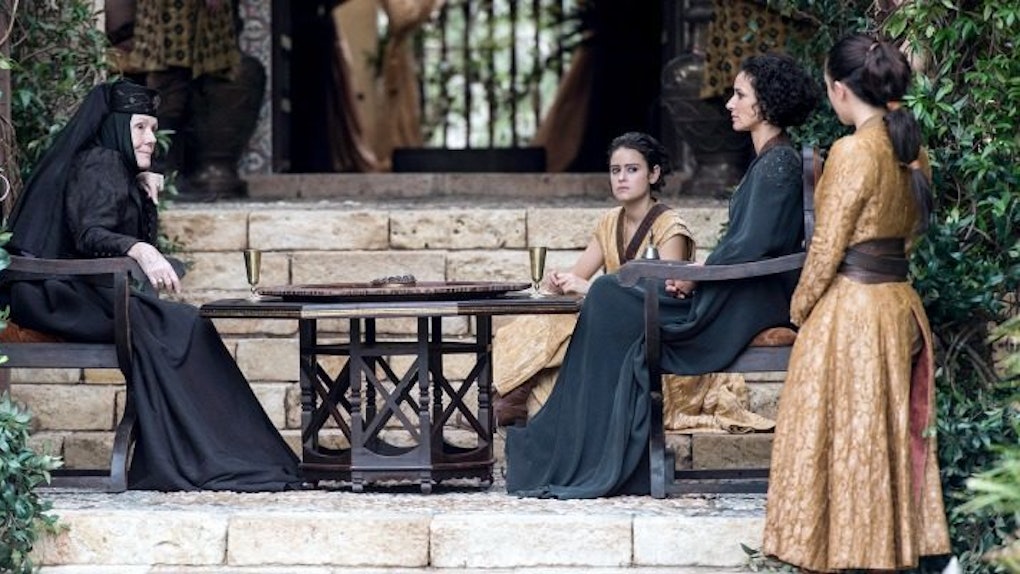 Why The "Game Of Thrones" Women Wore Black In The Finale

Season six of "Game of Thrones" may be over, but the conversation is still very much raging.

We're going over every character death in extreme detail, theorizing about Jon Snow as the rightful heir to the Iron Throne and definitely talking about the season's final episode, "The Winds of Winter."

Sunday's season six finale was arguably the greatest hour and change in television history. There, I said it. As one of my colleagues put it, this was more like a movie than the final show in a series.

The showrunners did an unbelievable job not only tying things together, but laying the foundations for the seventh season of "Game of Thrones."

A major theme of season six was undoubtedly the power of women. So many key females on "Game of Thrones" took control of their own destinies, which was refreshing to see considering how much flack the HBO show took for scenes like Sansa's rape at the hands of Ramsay Bolton.

Oh, and we can't forget Lady Olenna, of course.

In addition to all of the above-pictured women taking control, there's another thing they all shared in the season six finale: They were all wearing black.

Now, it's not entirely clear as to why all the essential female characters wore black in the finale, but I think it's fair to say this was a very powerful symbol of strength, mourning and anonymity.

Cersei Lannister wore a black outfit you're more likely to see at an Oakland Raiders game than the throne room at King's Landing, but hell if it wasn't one of the most epic outfits we've seen on "Game of Thrones."

That outfit was badass and serves as a symbol of Cersei's current role as queen, her mourning the death of her son, Tommen, and perhaps her knowledge her seat on the Iron Throne is only safe as long as she's willing to fight for it.

Daenerys Targaryen finally has the ships she requires to sail west and take the Iron Throne from Cersei Lannister. While she's predominantly been shown in white this season, her black outfit throughout the season six finale almost seemed to say: "I have no emotion; I'm here to conquer what's mine."

Speaking of sailing west, let's not overlook the character of Yara Greyjoy. This badass bitch has been killing it from the moment she stepped on screen. She's always worn dark gear, but it appeared even more pronounced in this season's finale.

Another female who finally stood up for herself is Sansa Stark. In addition to securing a victory against Ramsay Bolton in the "Battle of the Bastards," Sansa almost rediscovered what it means to be a Stark. She's no longer that little girl who's so easily manipulated by those around her -- we hope.

Let's not forget about Sansa's sister, Arya. Just when you thought the whole Braavos storyline was for nothing, Arya Stark swoops in, in black, and cuts Walder Frey's throat with all the ruthlessness of a well-trained assassin. She also made him eat his sons, which is horrifying and awesome at the same damn time.

Two of the strongest women in Westeros, Olenna Tyrell and Ellaria Sand, finally met at the ends of "The Winds of Winter." The two women, fully dressed in black, spoke predominantly of one thing: revenge.

They've both lost the people dearest to them, and wearing black is not only an expression of that, but the hell still to be paid for those responsible.

Last but not least, we have to talk about a character who first appeared in season six and immediately captured everyone's heart. Lyanna Mormont is the most badass 10-year-old I've even seen. She not only remained loyal to house Stark before the "Battle of the Bastards," she made sure the entire North rallied behind Jon Snow for the great fights still to come. She's as strong as her black garb demands and just as loyal.

I see you, ladies.

Citations: THE WOMEN OF GAME OF THRONES WORE BLACK FOR THE FINALE (Harper's BAZAAR)