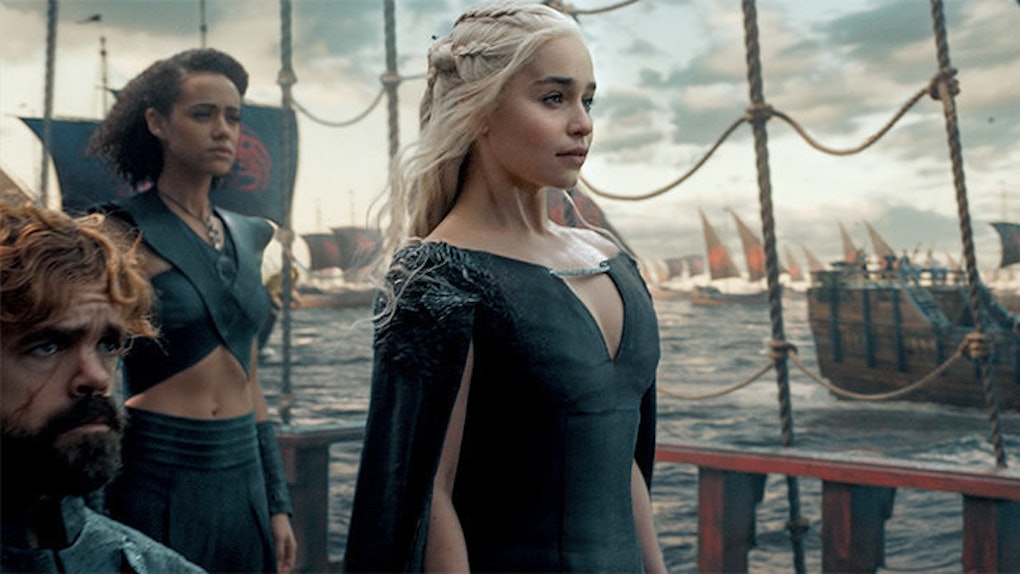 As if it hadn't been clear enough throughout the past 10 weeks, "Game of Thrones" made sure to punctuate its season six finale in a way that made it certain: this was the year of the woman.

All of the important battles in the past couple of weeks -- the Battle of the Bastards, the Liberation of Slaver's Bay and the struggle for power in King's Landing -- were won either by or because of a woman.

Hands of the queen now exist and gender roles have been shattered, much to the delight of the Westerosi (or, in other words, us fans).

Here's how each woman took control of her own destiny.

No more than a pawn in a game played by her brother, Viserys -- who claimed he would've let 40,000 men and their horses rape her if it meant the Iron Throne -- Dany ended the very first season of the series in a submission role, getting raped by her Khal Drogo.

She started out with only two assets to her name: the title of Drogo's khaleesi and the Targaryen blood that runs through her veins. She's milked both for all they're worth.

Her last name legitimizes her claim to the Iron Throne. Her power as the unburnt gave birth to her dragons and helped her conquer Vaes Dothrak. Overall, she's parlayed both assets into an expansive army that features a navy from the west, a khalasar from the east and a hand of the queen from a family that took down her house.

Of all the surviving children of House Stark, Sansa has come the farthest. Arya had the protection of The Hound, Jaqen H'ghar and even Tywin Lannister for significant parts of the series.

Jon faced the toughest battles, but notably lost one, when he died as the result of a mutiny at Castle Black. Bran has yet to have a truly triumphant comeback moment.

Sansa, on the other hand, has been alone pretty much since season one. She was once Joffrey's plaything, but survived. She was promised to the most heinous character in the show's arch, but survived. And during the Battle of the Bastards, she, in turn, ensured the survival of her house by triggering the Knights of the Vale's inclusion.

Most importantly, though, she underlined the theme of women's empowerment in the finale, literally pushing away Littlefinger's advances in the godswood, refusing to be another person's accessory.

With Theon away in Winterfell, Yara filled the void of a true heir to the Salt Throne, becoming a respect commander at the Iron Islands. Her attempt to rescue Theon from Ramsay Bolton was ultimately unsuccessful, but is undoubtedly part of the reason why her brother supports her claim as a credible heiress for Balon Greyjoy's position.

Her quick thinking got her navy to Mereen just when Euron was ready to kill them. And had it been Theon making an appeal at the Great Pyramid , there might not be a Greyjoy-Targaryen alliance, which was formed after Dany and Yara identified with each other.

Arya meant business from day one. She was proactively devoted to learning the art of the sword before she even had any real threat to defend herself from.

She's let tragedy fuel her throughout the whole series, with her list of enemies to kill literally getting her through the night. She also became a trained faceless assassin without giving up her name, having her cake and eating it too.

And while the lords of the north declared Jon Snow the one to have avenged the Red Wedding, the truth is that he only brought justice to House Bolton. Arya is the one who did the real avenging, at the scene of the crime itself no less, killing the now truly late Walder Frey.

Before his death, Tywin Lannister narrowed Cersei's worth to his house down to the mere fact that she could still give birth, which was supposed to put the stamp on an alliance with House Tyrell.

In the season six finale, she emphatically rejected that fate and the general notion of her having a "place." She literally "burned a house to the ground" -- as she once notably said she would. In the process, she took out her uncle, her fiancé, her daughter-in-law, Mace Tyrell and the High Sparrow in one fell swoop.

Of all the candidates for the Iron Throne -- Stannis, Renly, Daenerys and Robert's bastards -- not many would've even considered Cersei a dark horse. And yet, there she sits.

Lyanna set the tone for her big moment at Winterfell from the jump.

In season five, she sent a raven to Stannis asserting Bear Island's loyalty to House Stark, even when House Stark looked like it was extinct. She committed the small amount of men that she could to Jon and Sansa's cause when most other northern houses would not.

And she reminded everyone of that fact in the finale at Winterfell, crucially prompting the crowning of Jon Snow as the White Wolf, the King in the North.

Ellaria took it upon herself to avenge Prince Oberyn, regardless of whether he was killed lawfully or not. She's seemingly taken over Dorne by force, having removed Prince Doran from the picture.

Now she's brokering a peace with House Tyrell, which is traditionally no friend of Dorne, and that peace could see her go from watching her lover's brains literally get blown out (after Cersei's false accusations led to Tyrion's trial by combat) to completing vengeance at King's Landing.

...was, is and always will be a boss, these days more than ever with her heirs now dead.