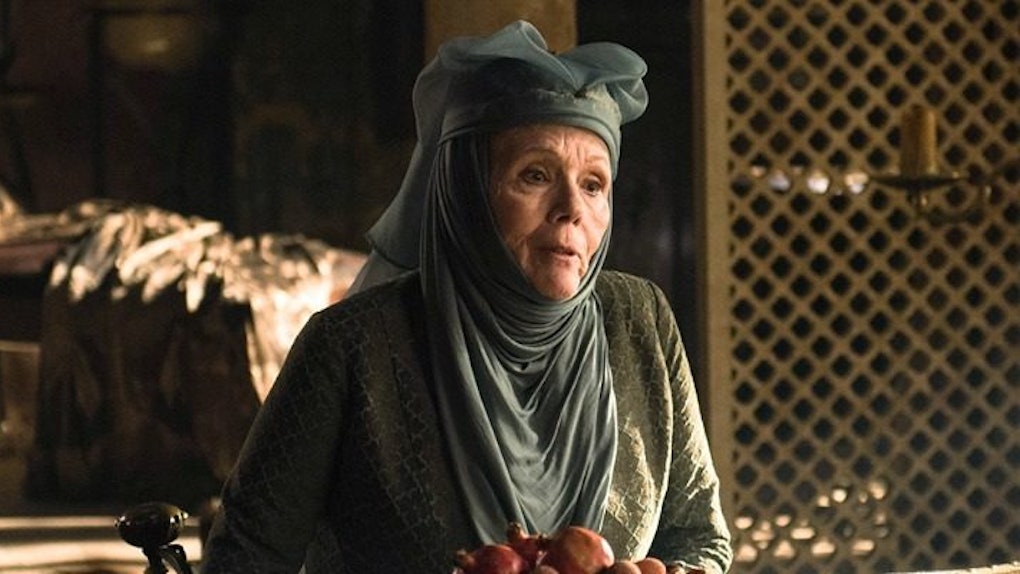 A deleted scene from season six of "Game of Thrones" was recently leaked, and as you can see in the clip below, it could be a massive spoiler for what's going to happen in season seven of the HBO hit.

In this deleted scene, Lady Olenna Tyrell, played by Diana Rigg, is having an intense conversation with Mace Tyrell, played by Roger Ashton-Griffiths, about plotting to take revenge on Cersei Lannister and leave King's Landing once and for all!

Olenna and Mace are riding in a carriage through King's Landing, conversing about how to get Margaery Tyrell and Loras Tyrell out of jail after they were imprisoned by the High Sparrow.

As you can hear in the video above, Olenna says to Mace,

Cersei Lannister sent you to Braavos to get you out of her way, and she sent the bloody King's Guard to make certain you stayed there. So, out of her way you stayed, eating, drinking, singing, while your own children were being rounded up by...

The Queen of Thorns continues,

Kevan Lannister has asked me to attend the Small Council meeting... It means I am the mistress of getting my grandchildren out of bloody prison. We will get them back. And we will leave this miserable place and let the Sparrows and Lannisters rip each other to pieces.

Now, we know Cersei Lannister was responsible for the High Sparrow and the Faith Militant coming to power in King's Landing, as well as the fact she eventually killed Margaery, Loras and Mace with wildfire.

If you think Olenna wanted revenge during this deleted scene, how do you think she's going to act in season seven?

Yeah, this is a pretty scandalous spoiler, and I'm not sure why "Game of Thrones" showrunners David Benioff and DB Weiss decided to cut this scene from the show.

Last we saw Olenna Tyrell at the end of season six, she was sitting in Dorne with Ellaria Sand and the Sand Snakes, being promised "fire and blood" and retribution by Varys, Daenerys Targaryen's emissary.

I can't wait to see how this all plays out in the seventh season of "Game of Thrones."