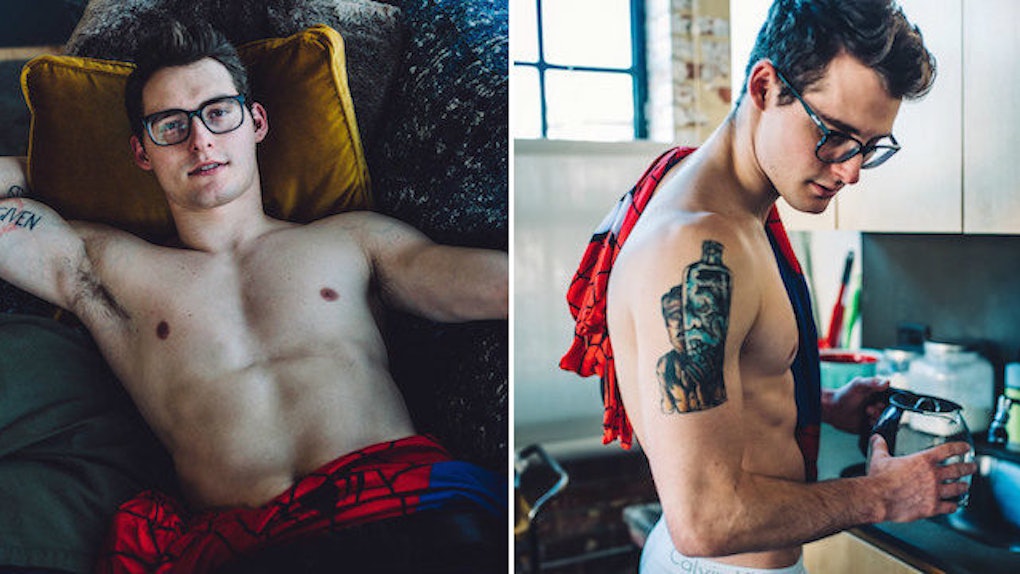 One of my all-time favorite movies growing up was “Spider-Man,” with Toby Maguire as the OG Spidey himself and James Franco taking on the role of Harry Osborn.

The moment Spider-Man hung upside down and let Mary Jane pull part of his mask down for a kiss proved him to be spontaneous, romantic and worthy AF boyfriend material.

For all of my fellow Spider-Man fanatics out there that can relate… oh snap, do I have a sexy present for you!

The man who blessed all of us with a downright sexual “Harry Potter” boudoir photoshoot, 24-year-old Zachary Howell, is back at it again… so gird your loins.

We initially reported the genius photographer behind the magical series, Sarah Hester, said the “Harry Potter” boudoir idea actually began as a joke between Howell and herself.

I started calling him 'Harry' because I could NOT remember his name. I jokingly asked if he would be willing to shoot a 'Harry Potter' boudoir session and he was into the idea! We set up the shoot for a week later.

And now on Tuesday, Hester introduced this new series of incredibly steamy photographs on her website with the caption,

After Peter Parker comes home from a tough day working and fighting villains he has to unwind a bit. Check out Zachary Howell as Peter Parker in our new Spidey series.

Here's Peter casually stripping out of his jeans because it's been a long AF day dealing with those pesky villains and all.

My spidey senses are tingling so much it's getting way too hot up in here to even DEAL.

Peter Parker is supposed to be a hero, but he's breaking the LAW looking this sexy.

Pondering has never looked this handsome.

Why not put a hot pot of coffee on while looking sexual in your Calvin Kleins? Because, duh, it's Peter Parker.

This is multi-tasking at its finest.

Peter Parker, you can save me ANY day.