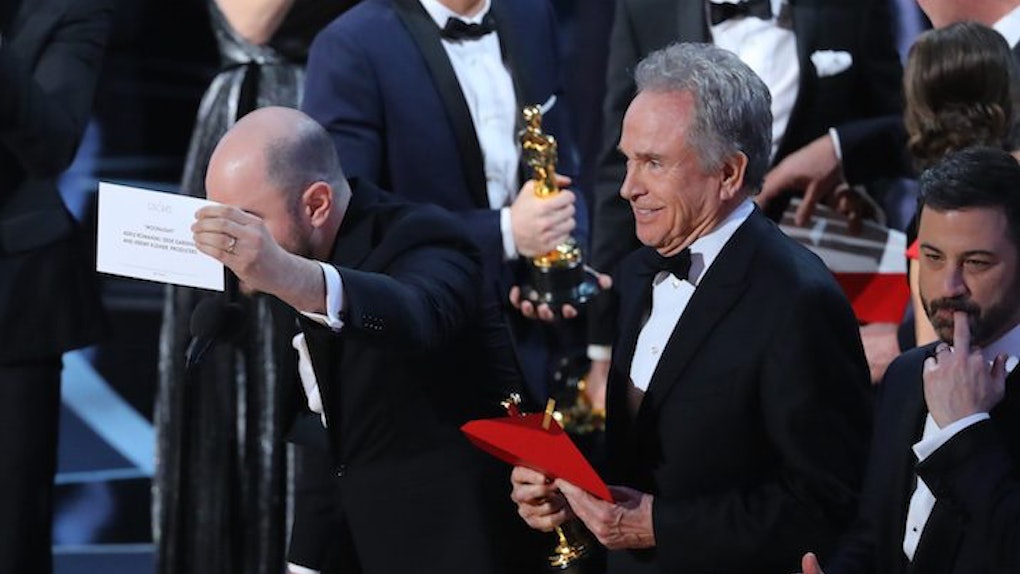 The Oscars on Sunday had a twist ending worthy of an Oscar itself.

Warren Beatty and Faye Dunaway were given the wrong envelope when presenting the final award of the night for Best Picture.

Instead of getting the Best Picture card, they got the Best Actress card. That award had already been given to Emma Stone for "La La Land."

What exactly went down to lead to this horrifically awkward Oscars moment?

Luckily, there's some backstage footage that gives us a little insight.

The Academy Awards are handled by the firm PricewaterhouseCoopers. They're the folks who carry the briefcase with the winners on the red carpet and do the math to figure out who won what.

They're also supposed to hand the envelopes to the presenters during the awards ceremony.

PwC said in a statement they take "full responsibility for the series of mistakes and breaches of established protocols" that happened at the Oscars.

PwC Partner Brian Cullinan mistakenly handed the back-up envelope for Actress in a Leading Role instead of the envelope for Best Picture to presenters Warren Beatty and Faye Dunaway. Once the error occurred, protocols for correcting it were not followed through quickly enough by Mr. Cullinan or his partner.

Based on some online evidence, Cullinan gave the presenters the wrong award envelope after tweeting a photo of Emma Stone.

He took a picture of her backstage and tweeted it out six minutes before the mix-up of a lifetime happened onstage. That tweet (along with others from the ceremony) has since been deleted.

You can see it all go down on backstage footage posted on Facebook by the Academy Awards.

Stone goes backstage and gets swarmed by cameras -- including people snapping pics on iPhones.

Just a few minutes later, the drama goes down. This includes the backstage hosts reacting, which is pretty hilarious footage.

This all lines up with what Stone said right after the drama. She insisted she was holding her Best Actress envelope, so it wasn't her doing.

Looks like PwC is going to be having a ton of angry meetings this week.