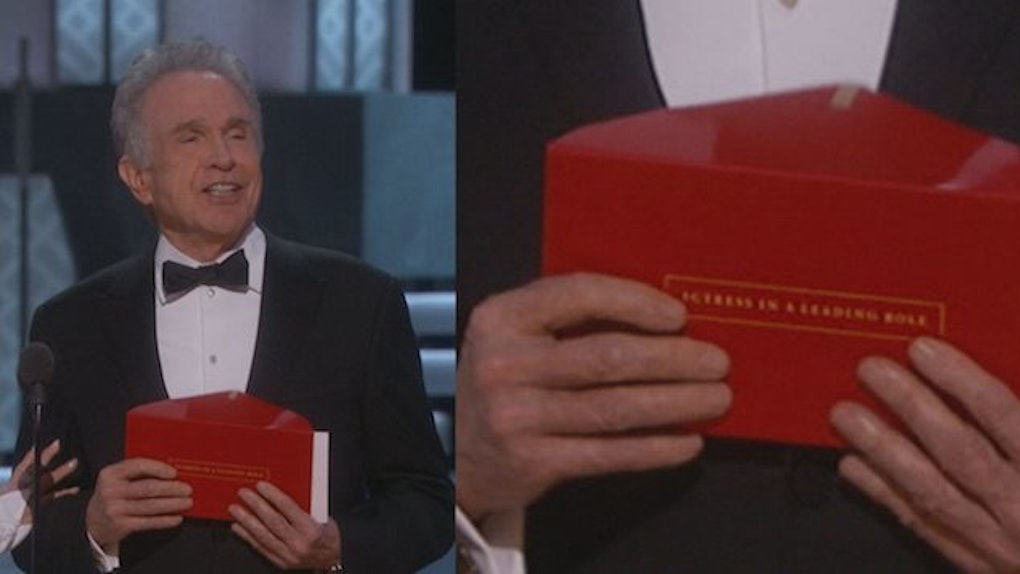 Here's Why 'La La Land' Was Announced As Oscars Winner

Sunday's Oscars ceremony ended unexpectedly when presenters Faye Dunaway and Warren Beatty announced the incorrect winner for Best Picture at the end of the night.

The "Bonnie and Clyde" actors read off the name "La La Land," even though "Moonlight" was the true winner of the award.

It was a terribly awkward and uncomfortable moment, to say the least, and it'll definitely go down in awards show history.

So what really happened? How could someone mess up the most CRUCIAL moment of the night?

Well, Beatty blamed it on the envelope, of course. He claimed he was handed the wrong card and told the audience,

I opened the envelope and it said, 'Emma Stone, 'La La Land.'' That's why I took such a long look at Faye and then you. I wasn't trying to be funny.

Emma Stone was awarded Best Actress In A Leading Role moments before the Best Picture nominees were read off.

After the show, Stone told the press,

I don't mean to start stuff, but whatever story that was, I had that card, so I am not sure what happened.

According to the accounting firm that runs the Oscars balloting for the last 83 years, PwC, there are two different sets of winning envelopes for each category.

Brian Cullinan and Martha L. Ruiz are reportedly the only two people who know the list of winners before the show.

[We] select the cards for the winners and put those into the respective envelopes ... on Friday and Saturday, and then bring the briefcase carrying those envelopes to the red carpet and to the show on Sunday, where both of us stand backstage, one on each side of the stage, and we hand the envelopes to the presenters right before they walk out... When we close the envelopes, that's the only place that the winner is written down.

From a security perspective, we double up everything. That's why there's two of us. We have two briefcases, that are identical, and we have two entire sets of winning envelopes. Martha carries one of those briefcases, I carry the other.

The security is obviously intense, because you know, the two are literally holding a briefcase filled with secrets. Cullinan added,

We go to the show separately with police escorts. I used to think it was for our security, it's really for the briefcase. We take different routes to get there just because of the kinds of things that can happen in LA traffic. We want to make sure that no matter what happens, one of us gets there. We've never really had a problem with that.

Cullinan also said he and Ruiz have to memorize the full list of winners just to be extra sure.

Even with all that information, "La La Land" producer Jordan Horowitz still has no clue who had the correct Best Picture envelope.

He retold the experience to ET and said,

So there suddenly appeared a guy on the stage, one of the guys with the headsets, and he started looking for the envelope because it felt like something was wrong... And I don't think anyone really knew because we were still sort of having our celebration and accepting [our award]. He asked for the envelope that I had been given when I walked up there and he opened it and it said, 'Emma Stone, 'La La Land.'' I mean, how that happened, I have no idea, but then a search for the correct envelope started happening.

I'm sure the entire thing was just one big misunderstanding, but I do feel bad for how the night went down.

I guess it's safe to say Warren Beatty and Faye Dunaway will never be presenters again. It's OK, guys. Happens to the best of us.