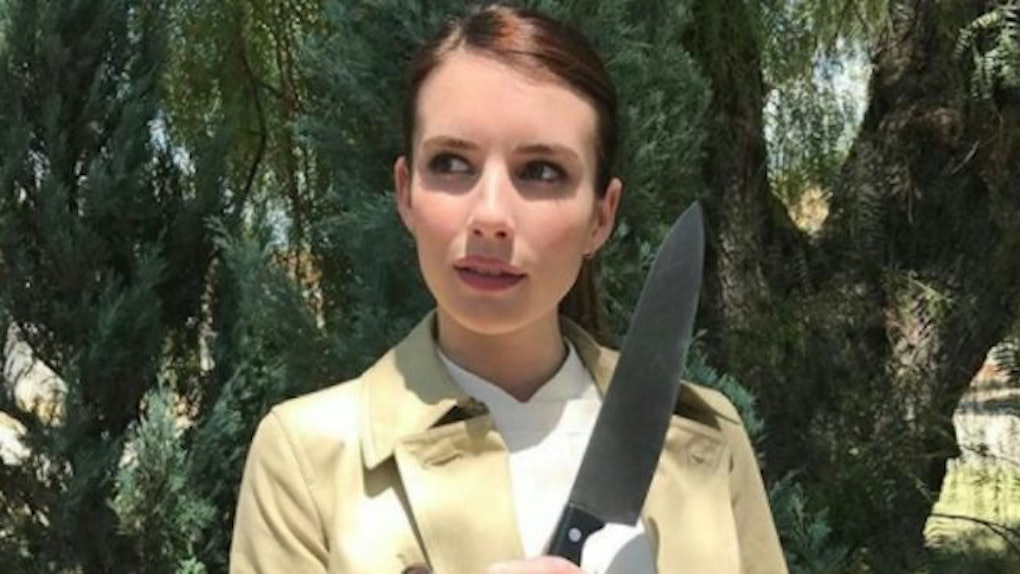 Who Is Emma Roberts Playing In 'AHS: Cult'? Her Character Was Finally Revealed

Since Ryan Murphy announced a theme for Season 7 of American Horror Story in February of this year, there has a long, tense build up to the first episode. Piece by piece over the past six months we've gotten creepy details about the plot, title, location, and relevance to the 2016 presidential election, but nothing has been as exciting as learning about Season 7's cast. Earlier this month, it was announced Emma Roberts is returning to the show this fall for the first time since her role in Season 4 of AHS, Freak Show, and Ryan Murphy just spilled the beans about Emma Roberts's AHS: Cult character. As someone who is always a fan of Emma's characters in the series, I gotta say I'm a little disappointed.

After a press screening of the new season's first three episodes, Ryan Murphy spoke with TVLine about the roles some of the cast members would be playing this time around. The show's creator told TVLine that Lena Dunham plays Valerie Solanas, the real-life woman who tried to murder Andy Warhol in the '60s, and Emma Roberts plays a newscaster named Serina Belinda in one episode of the season.

Yea, you read that correctly: Emma's character is only in one episode. Murphy revealed a few details about Emma's character, saying she gets a promotion over Adina Porter's character "simply because she's much more superficial and willing to do what it takes to survive." He told TVLine Emma did one episode "as a favor" to him since her schedule is so busy at the moment.

Like I said, I am a bit disappointed. When I first heard Emma was rejoining the cast of AHS I was super excited because she's had some really interesting roles on the series in the past. I was looking forward to seeing her take on another and make it entirely her own.

Throughout the season, [Peters is] playing six different cult leaders: Kai, Manson, David Koresh, Andy Warhol, Jim Jones — that's a big one. We really examine how those people rise to power. … They really are idiots.

Obviously, we're in for one hell of a twisted, confusing season, even if Emma is only in one episode.

There is a glimmer of hope for future seasons, though, since Murphy hinted Jessica Lange, Kathy Bates, and Emma Roberts could all be back alongside their veteran partners Sarah Paulson, Evan Peters, and the rest of the gang.