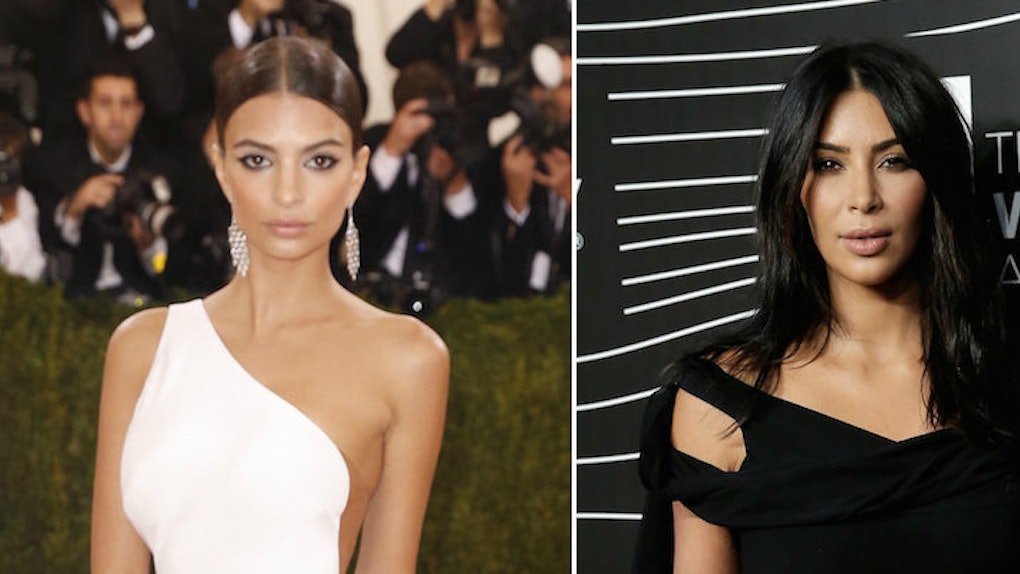 Emily Ratajkowski is finally opening up about the topless selfie she took with Kim Kardashian West in late March. Her reasons for doing it might come as a surprise to you, but according to a new interview, Ratajkowski took the photo for feminism.

WHAAAAATTT? FEMINISM MADE A WOMAN TAKE HER TOP OFF! THAT'S NOT FEMINISM, IT'S MANINISM!

OK, put your pitchforks down, people. Actually, once Ratajkowski explained why she did what she did, the topless selfie makes perfect sense.

Apparently, the chain of events resulting in this topless selfie actually began with Kim Kardashian's first solo naked selfie. Yeah, you definitely remember this selfie, the one Kim posted because she had "nothing to wear."

Well, this photo of Kim apparently prompted Piers Morgan, the British TV personality and journalist, to comment. It was Morgan's comments that set everything in motion, Ratajkowski said. So, at the time, she responded to Morgan's comments with an amazing tweet.

In case that tweet doesn't tell you how Ratajkowski felt about Morgan, she told the Evening Standard,

"[He was] talking about the fact Kim is 34 and a mother and that we're over seeing her in a sexual light, which I had a lot of problems with. He also implied that her husband [Kanye West] was writing her tweets, as if she isn't capable of writing them herself, which to me is incredibly sexist… There are lots of [criticisms] I can understand one might have about the Kardashians and reality TV, but even someone who you might be critical of is allowed to post a naked selfie if she wants to."

But, the tweet directed at Morgan apparently wasn't enough to satisfy Ratajkowski.

Kim was kind enough to send me flowers. Then we decided to do a selfie with our tops off, flipping off [sticking up her middle finger at] the camera, which I think speaks for itself. I tweeted about what the idea was behind how women need to have a space to be sexual.

That quote pretty much tells it all. If feminism is a woman's freedom to express her sexuality when, where and how she wants, especially in the context of responding to a guy like Piers Morgan, then Ratajkowski (and Kim Kardashian) was definitely a feminist in this photo.

See? I told you to put your pitchforks down and listen.