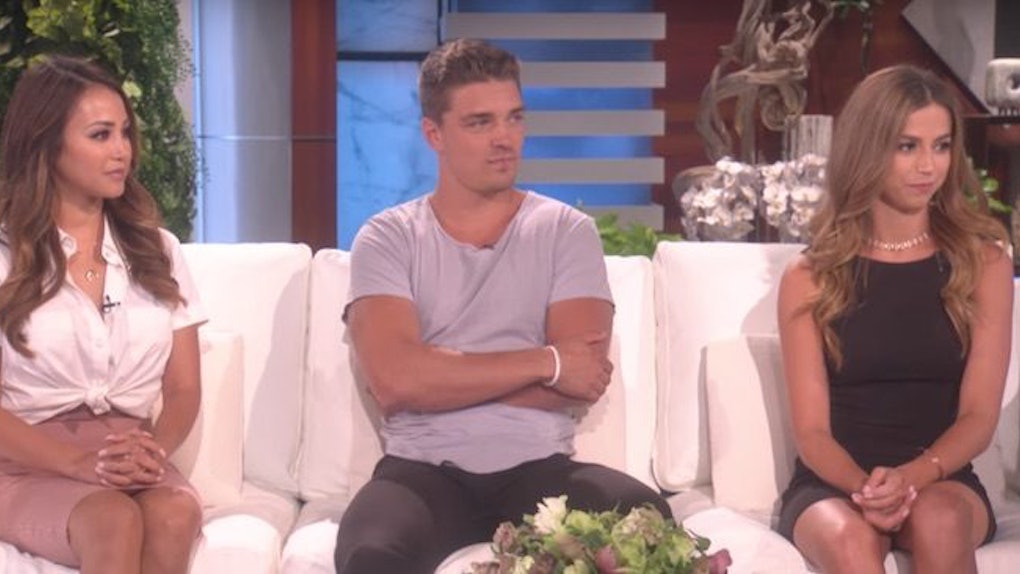 Dean, Kristina & Danielle L. On 'Ellen' After 'Bachelor In Paradise' Is So, So Awkward

The stars of the Bachelor franchise are not generally known for their charisma or poise, so is anyone really surprised that Dean, Kristina, and Danielle L. on Ellen are so awkward it's almost painful? Ellen DeGeneres, to her credit, did what she could to alleviate the uncomfortable atmosphere. But even an esteemed comedian like Ellen couldn't save this interview from the disaster that it became.

If you've been watching this season of Bachelor in Paradise, first of all, I'm sorry. I hope you're doing OK, emotionally. And second of all, you're probably aware of the great big heaping mess Dean Unglert caused with Kristina Schulman and Danielle Lombard (also known as Danielle L. or D-Lo). On Monday, the day of the Bachelor in Paradise Season 4 finale, the three contestants paid a visit to The Ellen Show to rehash that mess.

First, Ellen asked Kristina how she felt about her relationship with Dean early on. Kristina explained that it was an instant connection that first week.  Then Ellen turned to Danielle and asked how much Danielle knew about Kristina and Dean before asking Dean on a date herself. Danielle replied,

To which Ellen accurately replied,

Who confirmed that for you? Because that's not true.

Of course, as the viewers know, and as Danielle responded, it was actually Dean himself who said that he wasn't in a committed relationship.

Dean didn't deny this when it was his turn to chat with Ellen. When Ellen asked him if he thought he had been honest enough with Kristina, the 25-year-old Bachelorette alum replied,

I went into it with the moniker of just being open and honest about every little thing the entire time. I see now looking back I could have handled things much, and I did handle things pretty poorly. Because you do get that 'Bachelor bubble' where things are expected to happen very, very quickly. The break helped put things back into perspective of wanting to slow down a little bit. That's why I cam back with that mentality.

Hold on, Dean, are you apologizing or are you making excuses? What a perfectly classic f*ck boy move.

All three contestants in this love triangle agreed that there were things going on that they weren't aware of until they watched the episodes. Dean said,

OK, that is a little bit better, I guess. At least he's learning. But it's a little late at this point to win back the heart of Bachelor Nation — most fans already fully hate Dean at this point. After dragging poor Kristina along for the first half of the season, Dean changed his mind and picked D-Lo. Kristina left the show voluntarily, heartbroken and furious. In her goodbye interview, she said,

I came to paradise because I wanted to find someone to spend my time with… and I was getting that in the beginning, and as time went on I feel that I was not getting that in return. In my next relationship, I want to be valued and respected… with that said, I cannot give out this rose tonight and, gentlemen, I want you to know you're all amazing, but I won't be staying here, so I will be saying my goodbyes.

However, in this interview with Ellen, Kristina said she was willing to give Dean another chance if he'd learned his lesson. Ugh, no, Kristina, don't do it! Be strong, girl!