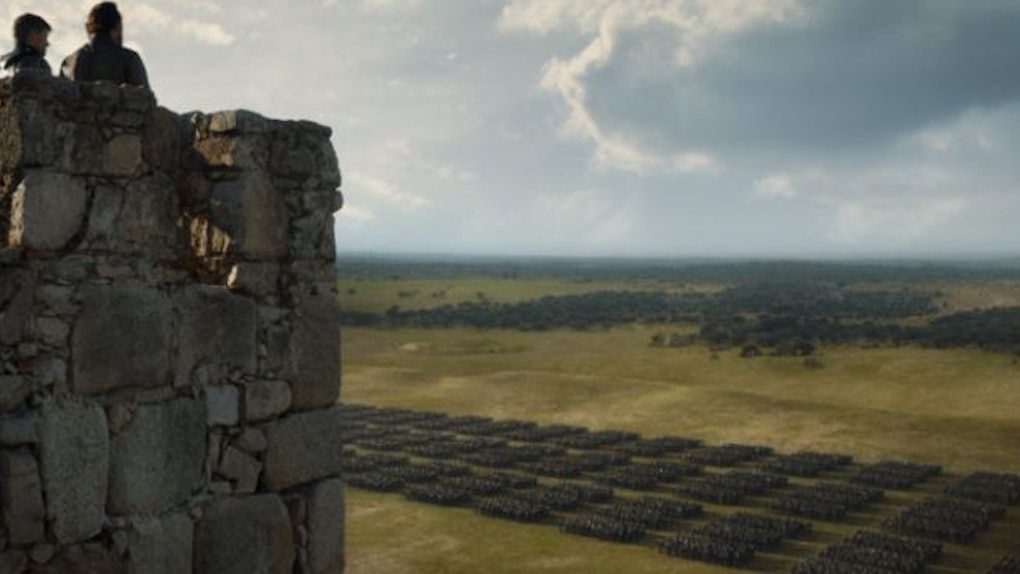 This post contains spoilers from the Game Of Thrones Season 7 finale. This is the second year in a row that Game of Thrones finale has spent the first 20 minutes of the episode in a single location, one where a majority of characters have assembled. But where last year's scene at the Sept was not expected by fans, this year's "Dragon Pit council" has been hyped since the actors filmed it last fall. Still, nothing prepared us for Daenarys' dragon entrance on the back of Drogon.

And by the looks of Cersei's face, she wasn't exactly expecting it either, nor was she thrilled. Jaime, and by extension Tyrion, had basically promised Cersei home field advantage for this council. Like Thomas Jefferson, Cersei got to arrange the menu, the venue, the seating, and got to be in the room where it happens. (We assume this is why Euron Greyjoy, of all people, has his own little tent set up in a corner, as if he's somehow on par with the rest of the characters at this meeting.)

But while Cersei got to assume the glamor of hosting duties, that mean she was already there when everyone else arrived. She forgot that it officially cedes the glamor of the big entrance to her biggest rival, Daenerys Targaryen.

One who has the dragons to make an entrance that counts.

Dear Katy Perry over at the VMAs, eat your heart out. Do you have Beyoncé arriving on a dragon to dominate the stage for a good quarter of an hour?

As for the fact that Dany only arrived with two dragons instead of three, most of the characters were too bowled over by her sturm und drang entrance to ask. That is, except Cersei, who clearly recognizes something is amiss, even if she doesn't know what yet. (Qyburn will probably find out sooner rather than later.) Let's hope Dany doesn't regret this entrance giving away Viserion's absence.