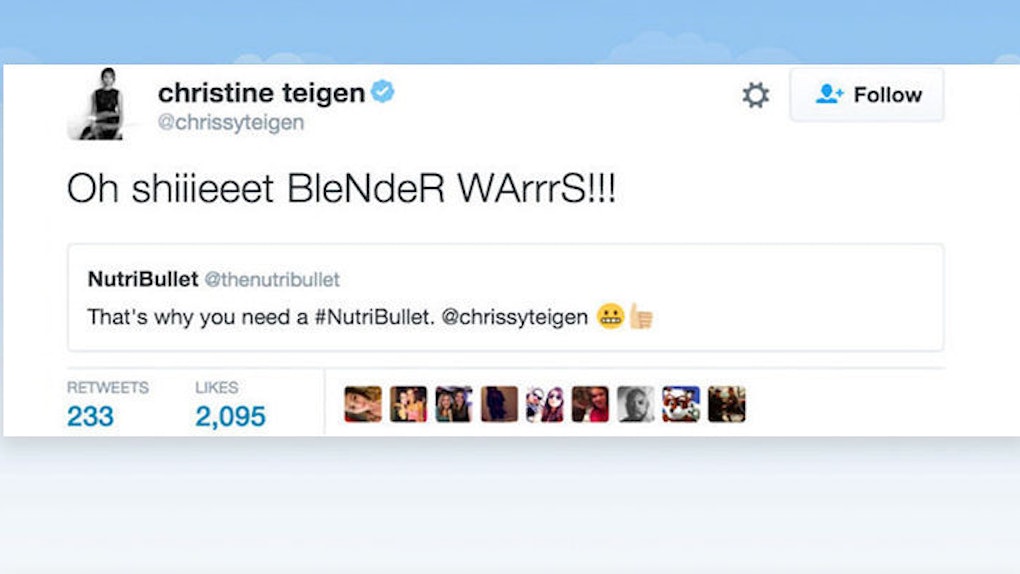 Now that summer has officially arrived, we're stoked to be whipping out our blenders.

You can make everything from muffins to salsa using a blender, and because it won't heat up your entire house, it's the perfect summer appliance.

But which blender are you supposed to choose? Vitamix might be the golden standard, but when you need an affordable, reliable blender, NutriBullet won't let you down.

The two companies existed in relative harmony -- until Chrissy Teigen threw a blender bomb, that is.

Another Twitter user tried to jump on the Chrissy Teigen gravy train...

And she got this funny response instead.

But this is where the story really begins. Could Vitamix be spying on Teigen?

It certainly looks that way.

For a hot sec, all seemed quiet on the blender front.

Until NutriBullet entered the mix.

NutriBullet tried to cool things down.

But Blendtec brought the heat.

Out of nowhere, NutriBullet launched some sass.

At the end of the day, I think we all know who the true Blender Wars winner is.

And the Blender Wars MVP award goes to John Legend for sleeping through the whole thing.

At the end of the day, you have to pick your battles.

Like some of Chrissy Teigen's other Twitter showdowns, I think we can all agree Blender Wars was definitely worth the effort.