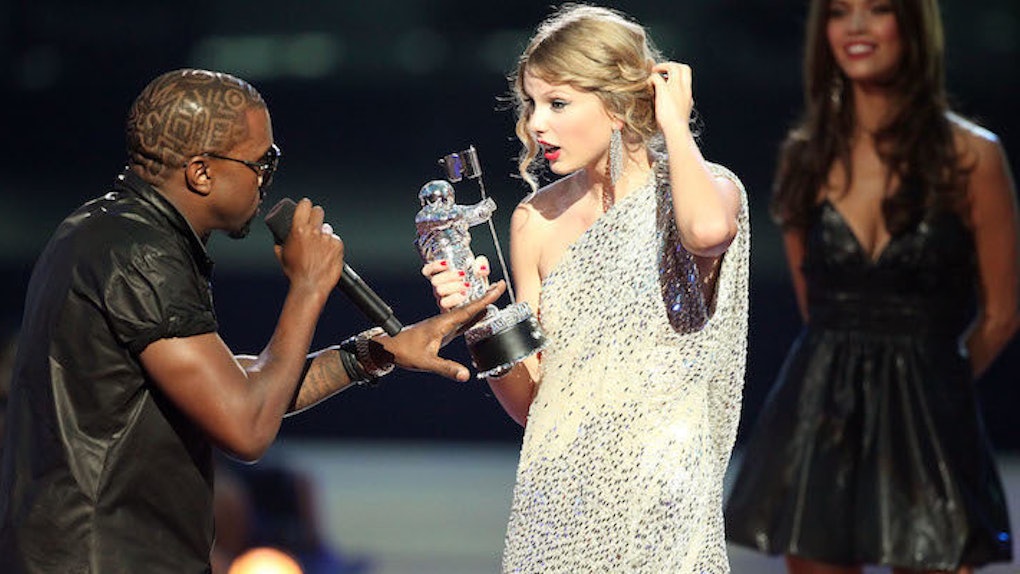 *Patiently sits in seat. Waits 20 seconds. Lunges at Kanye and has to be restrained by two guards.* YOU LAY OFF TAYLOR SWIFT! TAYLOR IS A DAMN SAINT!

Yeezy Season 3 was last night, and if you like angry, unmoving models, a giant butt-shaped tarp and a weird dose of anti-Taylor hate speech, then this year's show was right in your wheelhouse.

Hours after Kanye revealed he titled his newest album The Life of Pablo, the singer and future presidential candidate debuted his song “Famous” from the album at his New York Fashion Week event, and I'm just going to go ahead and let you read a line from the song here:

*Sits patiently for another 20 seconds.* I'm gonna kill him. *Guards restrain me again.*

HOW. EFFING. DARE. YOU. Taylor Swift had arguably the biggest year out of anyone in the history of the world, and you pull THIS crap right before the Grammy Awards!??!!

For starters, her brother put up this "F*CK YOU AND YOUR DUMB SHOES, KANYE!" Instagram video.

Then, Jamie King had Taylor's back.

Then, Gigi Hadid had Taylor's back.

Then, Ruby Rose had Taylor's back.

Then, Selena Gomez kind of had Taylor's back in the most slacktivist way possible.

Supposedly, Kanye did call Taylor before the release, but her publicist reportedly said it was to ask her about releasing the track on her Twitter. Even if he warned he would be making comments about her on his album, it wouldn't matter. That's like having someone say, "WHAT?! I TOLD YOU I WAS GOING TO IDENTITY FRAUD YOU RIGHT BEFORE I IDENTITY-FRAUDED YOU!"

Citations: Taylor Swifts Squad Including Gigi Hadid)Lash Out at Kanye West for Shocking Lyrics (US Weekly)