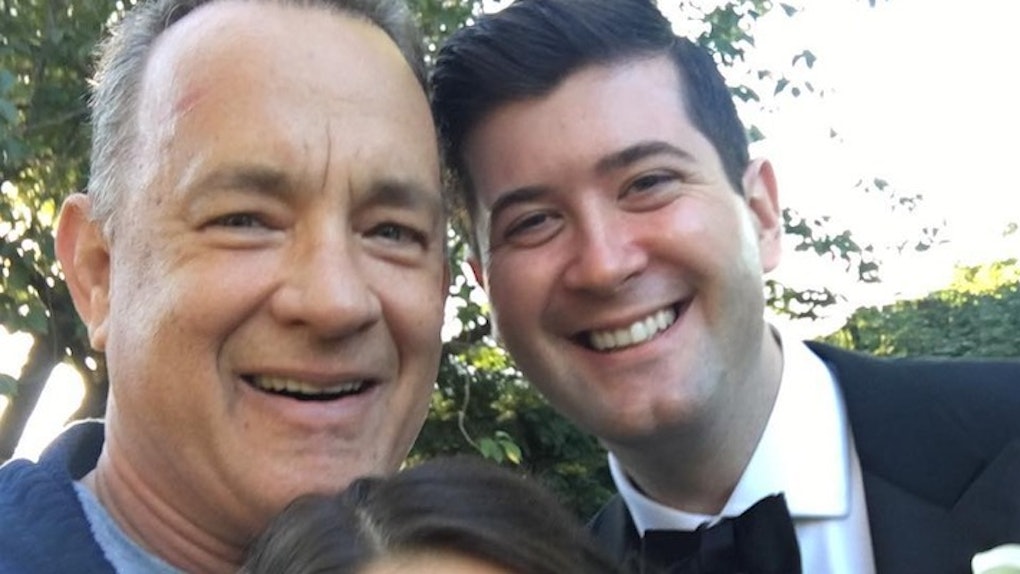 You're taking wedding photos with your spouse on your big day. Tom Hanks randomly waltzes into your photo and greets you with a handshake...

What do you do?

One lucky couple named Elizabeth and Ryan did what the rest of us would probably do -- pose for an epic selfie, of course!

The 60-year-old actor had been jogging through Central Park when he spotted a bride and groom posing for wedding photos.

That's when he walked over, took off his hat and literally said, "Hi, I'm Tom Hanks" before shaking their hands.

He asked if they needed a wedding officiant, because he is an ordained minister.

Damn it, Tom, you're so freakin' generous. Why can't everyone be like you? Better yet, why can't we all meet you during your morning jogs?!

Immediately after introducing himself and taking an epic selfie, Tom Hanks ran off into the distance. This almost sounds movie-like. Hey, Tom, what are your thoughts on a move about you crashing wedding photoshoots?!

I have the perfect title: "The Wedding Photoshoot Crasher"... OK, it might be a bit long, but let me know.

All jokes aside, the lucky couple was left with this priceless selfie... Prepare to be jealous.

In addition to the selfie, photographer Meg Miller was able to snap a few other photos. One of them includes Tom Hanks kissing the bride on the hand. How sweet is that?!

If we learned anything from this, it's that there aren't many other celebrities out there who are as genuinely awesome as Hanks is.

This isn't the first time Tom's good side wowed us. Remember the time he found a college student's ID and returned it to her?

Elizabeth and Ryan, I HOPE you took him up on that wedding officiant offer...

Congratulations on tying the knot!