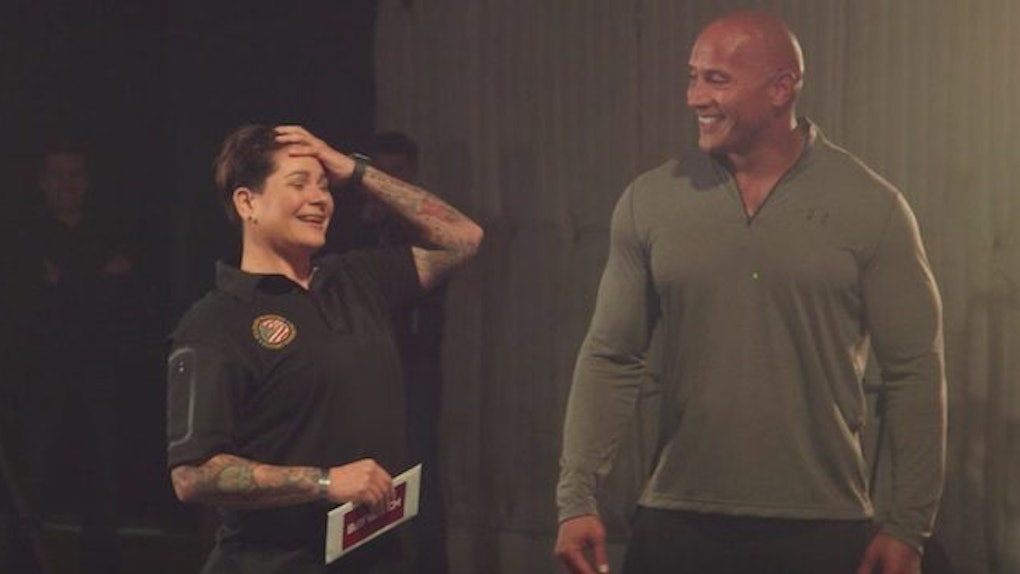 The Rock Surprised A Female Vet With A New Mustang

Dwayne "The Rock" Johnson just keeps getting classier.  If anything, 2017 is going to be made bearable by his actions alone.

Back in December, we reported how The Rock inspired a woman to lose 118 pounds and how he gave his father a freaking car for Christmas.

Well, Dwayne didn't stop there and has shown no signs of slowing down his philanthropic roll in the new year.

This time, he decided to make the day of Purple Heart recipient Marlene Rodriguez.

First, The Rock totally surprised her during her interview for Ford's Go Forward award. Just like all of us, Marlene is a total fan of Dwayne.

Then, The Rock gave her tickets to the world premiere of "Baywatch" as his honored guest.

Finally, *makes drumroll noise with mouth* he surprised her with a brand new Ford Mustang.

Needless to say, Marlene was in pure disbelief  -- she even thought this was all a joke at first.

After the reality of her incredible gift set in, Marlene simply asked the Rock at one point "why" she deserved this.

The Rock's response will definitely make you cry so if you're in public, yeah, maybe find a private space to weep openly for a few hours. He said,

Why? Because of everything you've done and everything that the boys and girls who you served with have done. That's why.

Still, Marlene was awestruck over her gift. She emotionally replied,

I don't deserve all this.

Dwayne didn't skip a beat and told her,

What? No, it's just been raining near the vicinity of my peepers. I'm totally not crying my eyes out or anything.

Dwayne has shown time and time again how meaningful it is to give back to those who give their everything to their family, their community and, in this case, their country.

Congrats, Marlene. We thank you for your service.