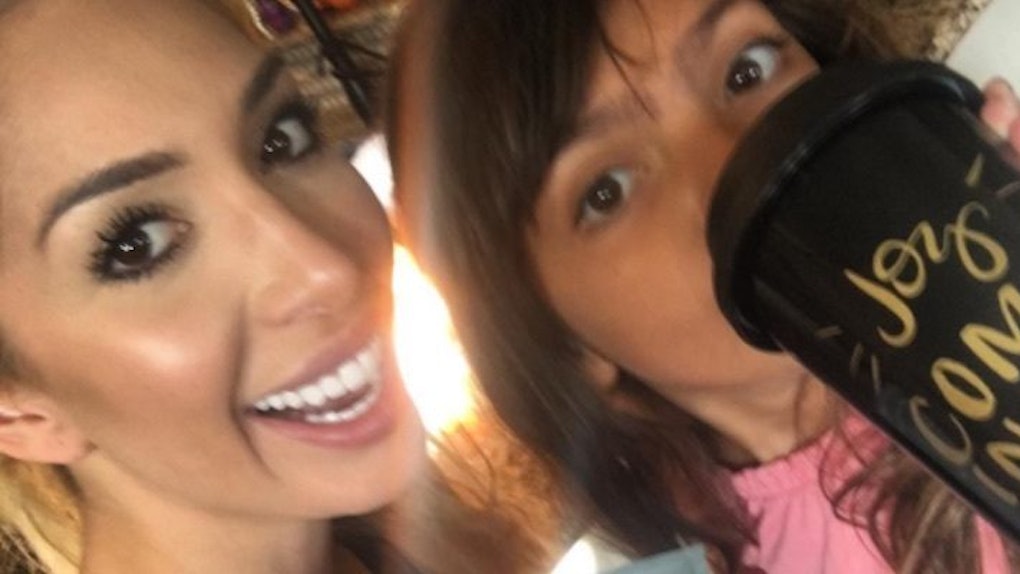 Just because Farrah Abraham rose to fame as a member of the “Teen Mom” crew doesn't mean she won't be observing traditional maternal values, like giving her daughter a weight complex at an impossibly young age.

A major part of the mother/daughter experience for many is toeing that line between loving your mother more than any other human being on Earth and dreading the moment she finds a McDonald's receipt in the pocket of your pullover.

Sophia Abraham may already be familiar with this dance, evidenced by a post-Halloween Instagram from Momma Farrah in which the duo enjoyed some Flat Tummy Tea “after all that candy.”

Fans online immediately agreed no 7-year-old needs laxative tea (especially one with claims that have yet to be evaluated by the FDA), or dieting techniques of any kind, after a routine Halloween candy binge.

Farrah followed up with Us Weekly, insisting Sophia was drinking strawberry milk, not slimming tea, in the photo.

She told the site,

She has strawberry milk and I have my tea… She wanted to take a pic like that, so no, my daughter does not have tea in her cup.

If this is at all true, it means we were all just sheepdogged back into the Farrah carnival of trolling for press, and I say this realizing I am fully part of the problem.

Still, if letting the MTV reality star rope us into some Insta-scheme to garner buzz by exploiting her child's well-being means she won't actually feed Sophia crazy diuretics, perhaps we should let her.

These are our options, America. We built this sad labyrinth of never-ending absurdities and we will stay here until we either die of boredom or at the hands of the minotaur who lives in the center of the maze and wears Ryan Seacrest's face.

Citations: Farrah Abraham Slammed for Giving Daughter Sophia, 7, Weight-Loss Laxative Tea — But It's Not What It Looks Like (Us Weekly)