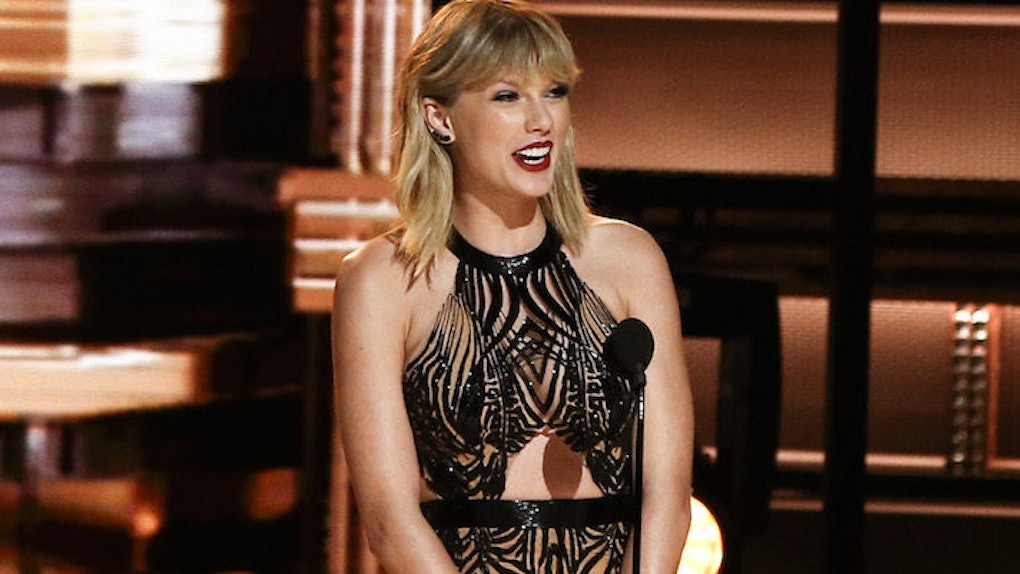 Taylor Swift Was A Surprise Presenter At The CMA Awards

You know, back when she was a feisty teenager with curly blonde locks, cowboy boots and winged eyeliner?

It's definitely been a while, so let me refresh your memory.

Ah, yes. There she is -- the Taylor Swift we all seem to have forgotten about.

In recent years, she's traded her country roots for mega pop stardom, but she certainly hasn't forgotten where she came from.

In fact, the 26-year-old songstress made an appearance at last night's Country Music Association Awards in Nashville, Tennessee for the first time in three years.

She didn't take the stage to perform, though. Instead, she was invited to present the award for Entertainer of the Year, which Garth Brooks ended up winning.

Needless to say, she looked flawless. We're happy for you, Tay!

You need to admit, after a year full of agonizing relationship drama, the singer really pulled it together for this one.

She's even been battling pregnancy rumors, which she quickly put to shame with her see-through dress exposing her *very flat* stomach.

All jokes aside, Swift can make a completely see-through dress look classy AF. She deserves an award for that in itself.

She also rocked her signature deep red lipstick and let her natural blonde hair fall to her shoulders.

Let's take another look at the singer's utter perfection.

TAYLOR, YOU'RE A GEM.

According to DailyMail.com, Taylor reminisced about her country music days while she stood onstage at the CMAs. She reportedly said,

It's almost been 13 years since I came to Nashville to become a songwriter and recording artist and I've learned so much about what it means to be an entertainer from the remarkable artists in this arena tonight.

As a Swift fan from day one, I'm getting super emotional right now.

Swift has been nominated at the CMAs 25 times and won 11 awards.

Taylor, I know there are rumors of you working with Drake nowadays, but maybe you should think about releasing another country record down the road, just for old times' sake.