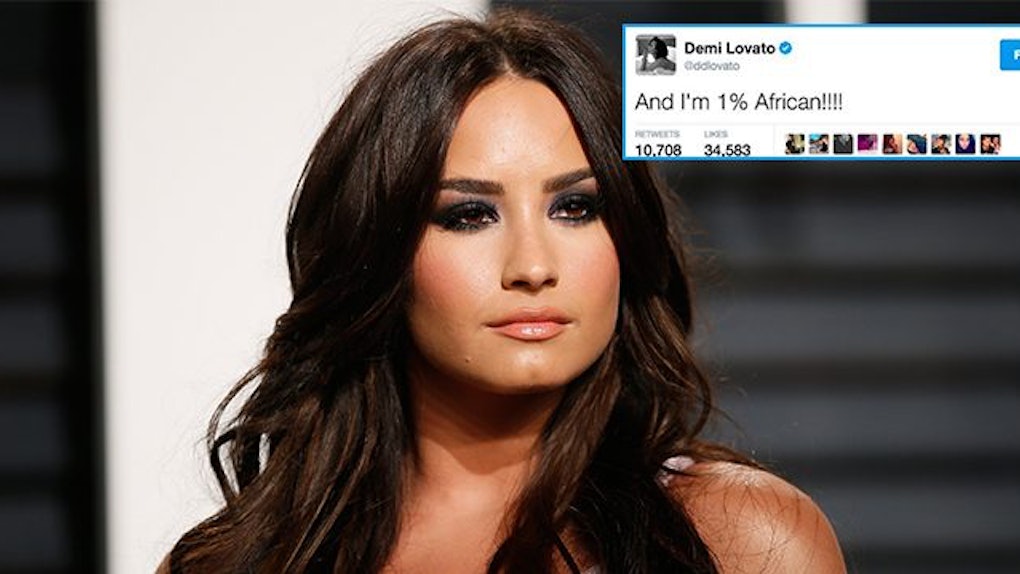 Demi Lovato has never been shy when it comes to dishing out the deets on all sorts of personal matters.

Whether it's giving fans a glimpse of her morning routine and workout regimen or speaking out about touchy subjects such as her issues with addiction and body image, this singer tends to be an open book.

Therefore, it should come as no surprise Demi Lovato recently decided to share her heritage with the world.

Not to mention, 1 whole percent African.

That's right. Demi Lovato posted a screenshot of the results, and according to her DNA, the 24-year old singer is in fact 1 percent African.

As you can probably imagine, Demi Lovato's announcement about being 1 percent African garnered a lot of mixed reactions from the Twitterverse.

A lot of people seemed genuinely confused by the whole thing...

...and the fact that this fair-skinned singer claimed to be of African decent raised a lot of questions for people.

Many Twitter users were angry at Demi Lovato for tweeting her DNA results...

...and some hated on the singer by saying she's 1 percent African "and 99 percent extra."

Other people pointed out everyone has a small percentage of African decent in their genetic makeup...

...and questioned why Demi would be sharing information that no one cares about.

There were also some people who accused Demi Lovato of trying to stir up drama...

...and cause yet another massive Twitter controversy with her ridiculous DNA results.

Plus, there were those who just really didn't have the time or energy to deal with yet another one of Demi's ridiculous Twitter feuds.

A few people, however, did stand up for Demi Lovato and try to defend the singer.

Some of Lovato's loyal fans pointed out the singer simply posted the results of her DNA test...

...and was excited to share the news since Africa is a place that holds a special place in the 24-year-old's heart.

Demi eventually responded to some of the rude comments, claiming she wasn't sharing "old" news about her ancestry...

...and she highlighted the fact that she included all of the nationalities in her genetic makeup, not just African.

Demi Lovato also took a moment to let all her haters know they were mean AF for ragging on her DNA test results.

Seriously, why does everyone have to be such a damn critic these days.