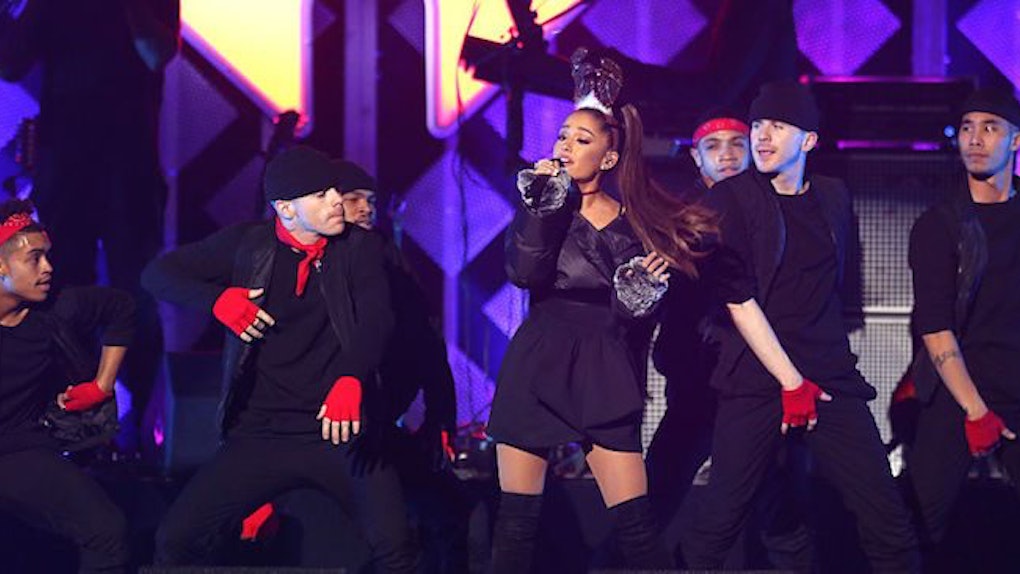 Ariana Grande Jokes Are Not Okay

On Monday night, Greater Manchester police responded to a "serious incident" at an Ariana Grande concert at the Manchester Arena in the UK.

UPDATE: Manchester police revealed Tuesday morning that at least 22 people are dead and about 60 injured after a lone bomber detonated an improvised explosive device outside an Ariana Grande concert in Manchester, England. The attacker is deceased and police believe he acted alone. According to CNN, authorities are investigating whether the attacker was part of a broader terror network.

Here's how you can help victims of the attack, which is the deadliest Britain has seen since the 2005 London bombing.

Grande was not injured at the concert and tweeted after the event: "broken. from the bottom of my heart, i am so so sorry. i don't have words."

EARLIER: GM police have released the following statement on Twitter:

Further details on the incident at Manchester Arena have now been released. Just before 10:35pm on Monday, May 22, 2017, police were called to reports of an explosion at Manchester Arena. This is currently being treated as a terrorist incident until police know otherwise.

Elite Daily has reached out to Ariana Grande's team for more information, but did not hear back by the time of publication.

“Ariana is okay. We are further investigating what happened," Grande's rep said to E! News.

Despite the fact that fatalities had been reported, some Twitter users have resorted to making jokes about the situation:

But clearly, now is absolutely not the time to be making jokes about Ariana Grande, especially considering at least 19 concert goers were killed and approximately 50 were injured, according to the Greater Manchester Police and the Associated Press.

A number of Twitter users expressed how horrified they were to see people making jokes about such a devastating situation at all, much less so quickly following the incident.

Other Twitter users have posted horrifying videos of scenes from inside the arena to give those individuals making jokes a view of how grave the situation actually is.

NBC News tweeted a dashcam video, in which an alleged explosion sound appears to be heard, from outside the venue.

As this story continues to develop, one thing is for certain: There is absolutely never an appropriate time to make jokes about a situation in which innocent people are injured. It could've been one of your loved ones. It could've been you.

Thankfully, Ariana is safe, as are many of her concertgoers, and our thoughts are with all of the victims of tonight's incident and their loved ones.