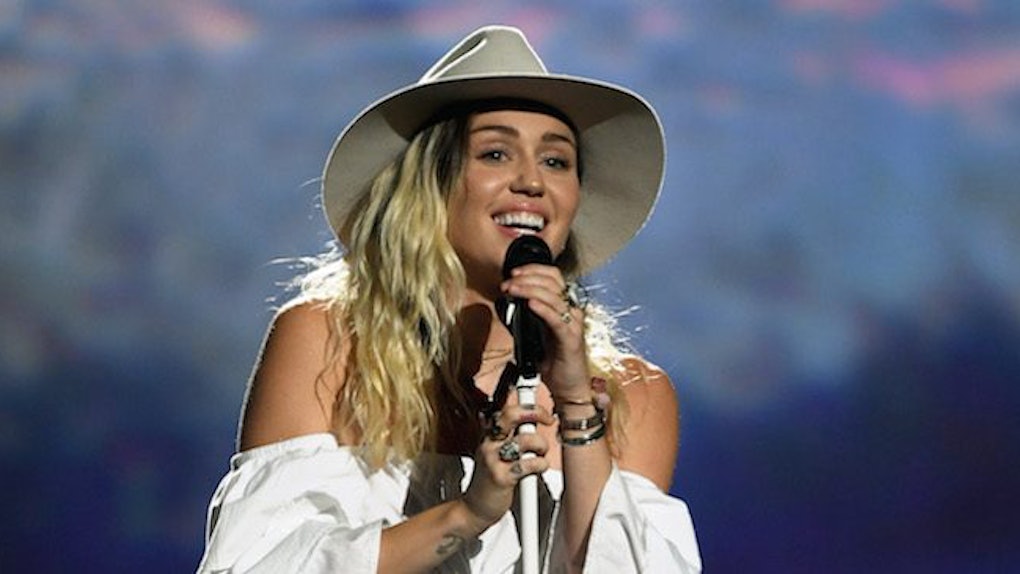 The distance between “old” Miley Cyrus music and the new sound and vibe the singer offers up on her album Younger Now seems like thousands of miles. In a moment of nostalgia, during a recent Instagram Live session, Cyrus kicked it old school and fans were totally on board. Watch the video of Miley Cyrus singing “The Climb" and you're guaranteed to get a few goose bumps.

For those not in the know (but honestly, how could you not know?), Cyrus' song “The Climb” was made famous by Hannah Montana: The Movie, all the way back in 2009. Yeah, I feel old too.

The last time Cyrus performed the tune was at the 2011 CNN Heroes: An All-Star Tribute, so it's been a bit and probably no one would have guessed that the singer would throw it back so far. And it's so magical, honestly.

Cyrus posted the video on Instagram, writing: “New jams & Oldies but goodies! #IWouldDieForYou #TheClimb #WreckingBall (ps WB went #1 4 years ago today!) All on tonight's (and my first) LIVE stream !!!! Had the best listening party I could everrrrr ask for! Thank you for sharing a very special night with me! Can't wait to see y'all @ my album release tomorrow in Nashville! Looooove you w all my [heart emoji]! Swipe to see more!”

Who would expect that having a listening party for a new album would involve some much-loved classics?

In the video clips, Cyrus sounds amazing on “The Climb” and it's such a beautiful song that fans were pretty emotional about the whole thing.

For anyone looking for a refresher (Cyrus needed to cheat and look up the lyrics too), here's a taste:

And, just in case you needed it (trust me, you do), here's the full video:

And yes, she did have to look up the lyrics, as someone pointed out:

There were plenty of tears:

This was a common feel too:

Cyrus also gave “Wrecking Ball” a walk down memory lane and it was all pretty epic. The singer recently told NME Magazine that the song “doesn't reflect who I am now,” but she's grateful for the tune, explaining:

I should be grateful every f*cking day for that song, and I am. I think people look at things that they've done and there is this sense of shame, or 'I wish I wouldn't have done that' — not because I'm naked, by the way. It's because I feel like I'm in a deeper songwriting place.

She continued, “Lyrically, I'm less impressed with that song right now. I feel like it doesn't reflect who I am now, but that's fine because it's not supposed to. I'm sure I'll say the same thing about this record at some point.”

I'd like to think that Cyrus singing these old songs brought us all just a little closer together.