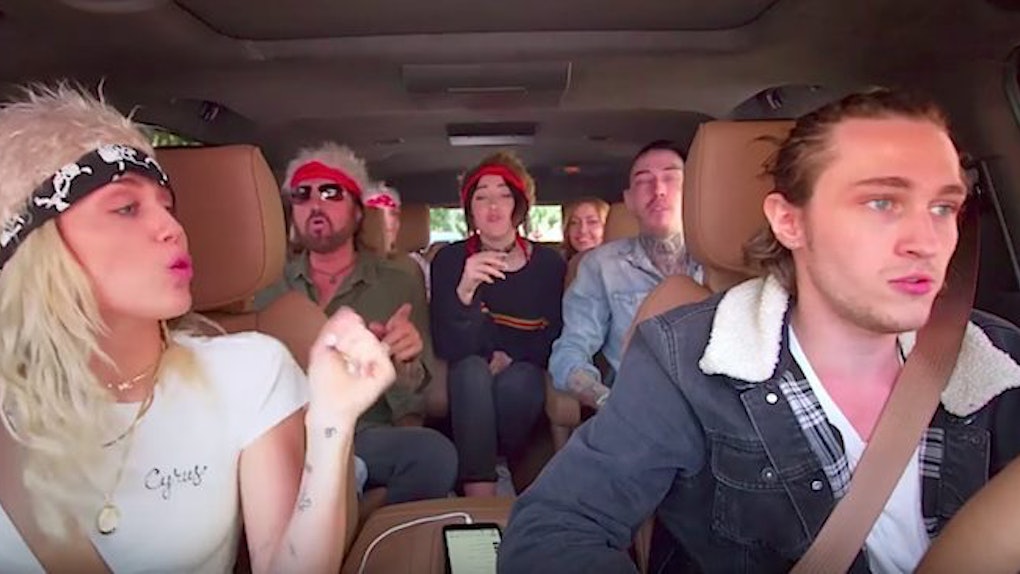 Miley Cyrus' 'Carpool Karaoke' Episode With Her Family Is Everything

Miley Cyrus and her entire family are the stars of the newest episode of Carpool Karaoke on Apple Music, and it's the cutest thing you'll see all week. Miley Cyrus' Carpool Karaoke episode is filled with the family's greatest hits (you probably forgot that her family is responsible for a lot of jams over the years), and it'll leave the songs stuck in your head all day. You can watch the episode in its 16-minute entirety on Apple Music, but the video starts out with Miley and Billy Ray Cyrus driving around and chatting, then Billy Ray goes full dad when Miley says she's going to be 25 this year, and he responds,

That's how I keep record of everything. It's based on when you were born. That's the most significant moment of my life.

After "Malibu" is over, Billy Ray and Miley arrive at Miley's grandmother's house where they pick up Tish (mama Cyrus) and Brandi (the oldest sibling in the fam). They play some classic road trip games in the car, and Tish jams out to "Party In The U.S.A.," and all I could say while watching that part was "same."

Next they pick up Noah Cyrus (who was up for Best New Artist at the VMAs this year), and she kicks Billy Ray out the driver's seat so she can drive. And then she takes her hands off the wheel in order to dance, like, many times... so that was concerning. But everything's fine!!! The family rocks out to Noah's new song "Stay Together," and it's adorable. The brothers Trace and Braison are the last to get picked up, and then we have one big Cyrus family reunion.

Once Trace and Braison are in the car, the family starts jamming to Metro Station's "Shake It" because that is literally Trace Cyrus' band and my entire world just got turned upside down. I went through all of high school jamming to this song and literally had no idea that Miley Cyrus' older brother was responsible for it. And get this, guys, Mitchell Musso's brother, Mason Musso, is in Metro Station, too!! Am I the last one to discover this?! I'm freaking out! In case you forgot (how dare you), Mitchell Musso played Oliver on Hannah Montana, so Metro Station is essentially a Hannah Montana sibling band, and I am shook.

The video closes out with the family putting on fake mullets and singing along to Billy Ray's "Achy Breaky Heart," and it is everything. You can check out the entire Cyrus family episode of Carpool Karaoke on Apple Music, and in the meantime, I'll be trying to wrap my head around the fact that I had no idea the Cyrus family was responsible for "Shake It."