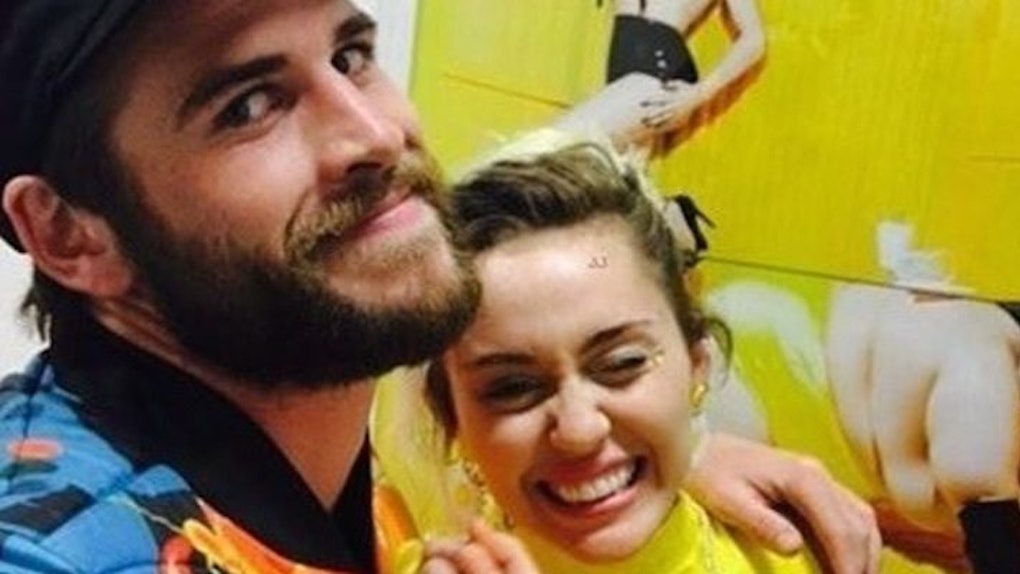 As Hollywood couple after Hollywood couple breaks up without consulting a damn one of us, Miley Cyrus and Liam Hemsworth respect the public enough to not only get back together but do so ardently.

Miley and Liam slapped on their most colorful outfits Saturday and headed to pal Vijat Mohindra's premier solo photography exhibit.

The duo was joined by burlesque dancer Amazon Ashley and friends Wayne Coyne of the Flaming Lips and his girlfriend, Katy Weaver.

Miley and Katy matched their mod yellow shift dresses for the event and looked like two beautiful sixties pixies.

The 23-year-old pop star and her actor fiancé — who initially called off their engagement in 2013 — have been back together since January, though they've stayed pretty low-key for most of 2016.

Last month, Miley admitted during an interview on “The Ellen Degeneres Show” her engagement ring isn't quite her “aesthetic,” but claimed she told Liam,

I'll wear it 'cause you love me.

Granted, she still replaces the rock from time to time with a “unicorn or a Looney Tune," in true Miley fashion.

When Miley isn't living it the hell up on double dates with rock royalty, she's campaigning hard for your girl Hillary Clinton.

Liiike, her Insta is FULL of Hil.

Miley has the wisdom of a million former Disney child stars. Anyone still struggling with indecision, look no further than your last-minute Election Spirit Guide, who also doubles as a non-profit organizer who doesn't have time for shoes.

She has a bizarre wealth of Hillary knowledge and two sparkling eyeballs that could calm and convince even the most uncertain among us to vote either for the Democratic candidate or against the terrifying racist bag of moldy tangerines running against her.

Oof, democracy. It's no surprise Miley needed an art gallery escape leading up to election week.

Citations: Miley Cyrus and Liam Hemsworth Get Goofy Stepping Out Together at Friend's Art Show (ET)