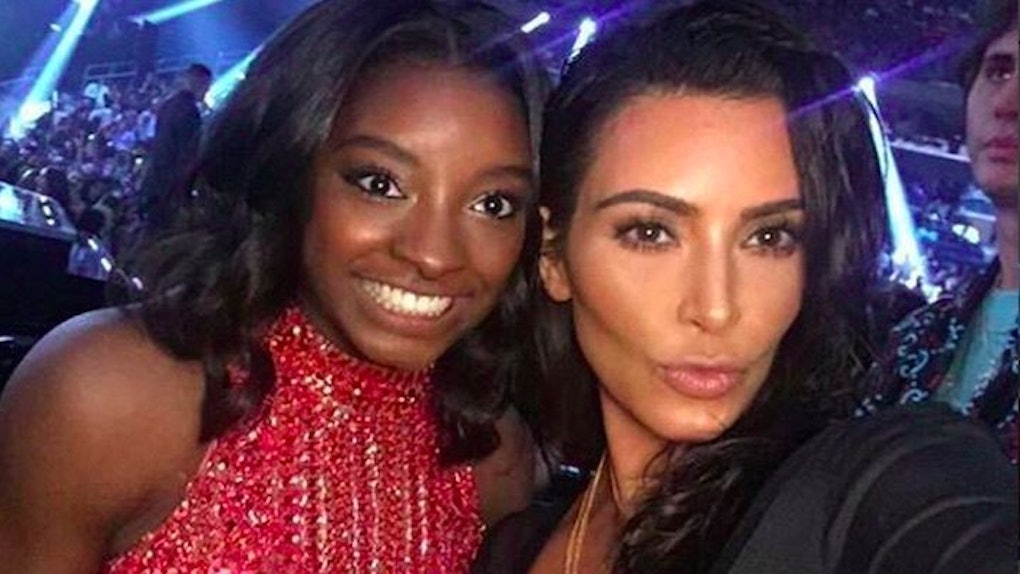 Kim Kardashian Totally Fangirled Over Simone Biles At The VMAs

Kim Kardashian was pretty starstruck last night when she met Simone Biles and the Final Five.

Like the rest of America, Kim K was fairly obsessed with the US Olympic gymnastics team during the Rio Games. More accurately, the whole Kardashian-West family couldn't get enough of the squad.

Are we a few years out from North West scoring a gold medal with the rest of the gymnastics team?

Kim was finally able to meet some of her Rio favorites last night at the MTV VMAs in NYC.

She, of course, shared the whole experience on Snapchat, and she, of course, seemingly freaked out a little when she met the whole team -- sans Gabby Douglas who was away from the awards due to some mystery medical thing.

Kim with four-fifths of the Final Five.

She also got some one-on-one time with Simone Biles.

Keeping up with the Olympic theme, Michael Phelps also got some face time with the Kardashian-Wests.

Kim wasn't the only one getting some quality time with a member of the Final Five. Last night, Chrissy Teigen and Aly Raisman finally solidified their online mutual-fangirl-ship before MTV's award show.

Having a friend on the Final Five is this year's big Hollywood accessory.