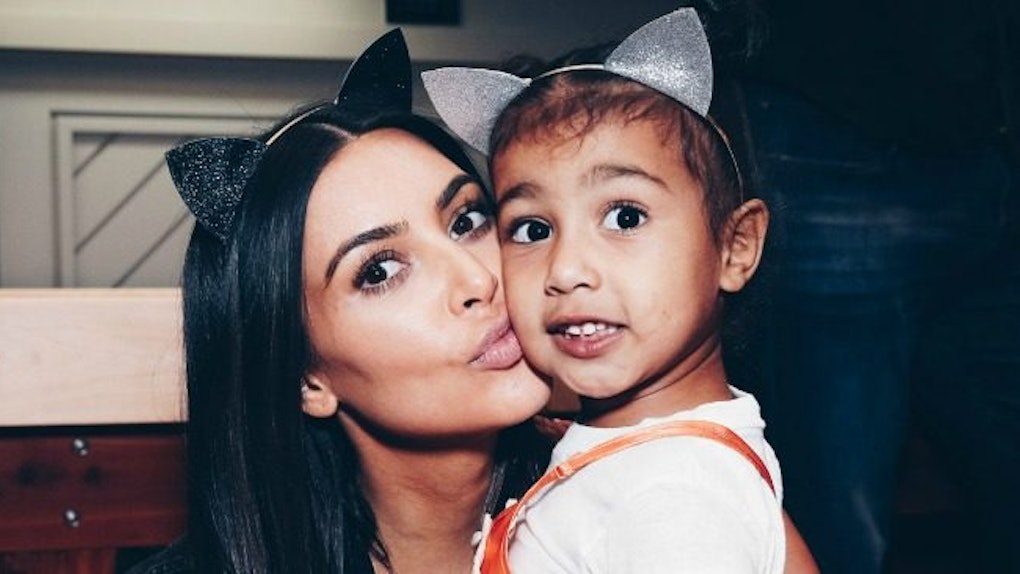 Kim Kardashian is basically a perfect human. I mean, who else can wear five-inch stilettos while eight months pregnant? Literally, no one. That's why I love that she speaks out about not-so-perfect parenting moments. Instead of acting like her life is as flawless as her skin, Kardashian revealed some of the challenging aspects of raising two young kids. For example: North and Saint West's sibling relationship.

According to E! News, while Kardashian was filling in for Kelly Ripa on Live! With Kelly and Ryan, she opened up about North and Saint being "so different." She said this about the sibling rivalry between four-year-old North and 20-month-old Saint,

I don't know if it's 'cause she's the older sister... I don't know what it is; I thought it was a phase. She does not like her brother. It's so hard for me ... I thought it was like, 'OK, a couple months; she's just warming up to it.' She got so jealous when I would breastfeed and all that stuff. Now, the phase isn't going away!

I'm the youngest child in my family so I relate to Saint more. To my older sibs: I'm sorry, I can't help that I'm the favorite. JK, JK (not really). Honestly, North is a smart cookie. Kardashian says she thinks of tricky ways to exclude her brother.

She's like, 'We're having a tea party. No boys allowed. Dad can't come. No boys!' She'll slam the door on her brother's face, and he'll just start crying.

With tactics like this, North is legit going to rule the world someday. Although she may not be partial to Saint, he seems to have taken a liking to his big sis.

[Saint] likes to imitate her now. So if she's crying, then he'll just start fake crying. I'm like, 'One of you! I can't pick up both of you and figure it all out!'

Parenting sounds hard AF. Luckily for Kardashian, North and Saint are seriously the cutest. How could you ever stay mad at them?!

I really love hearing Kardashian talk about the good and bad parts of parenting. She seems like a great mom and super dedicated to her family. Sibling rivalry or not — North and Saint are cuteness overload.