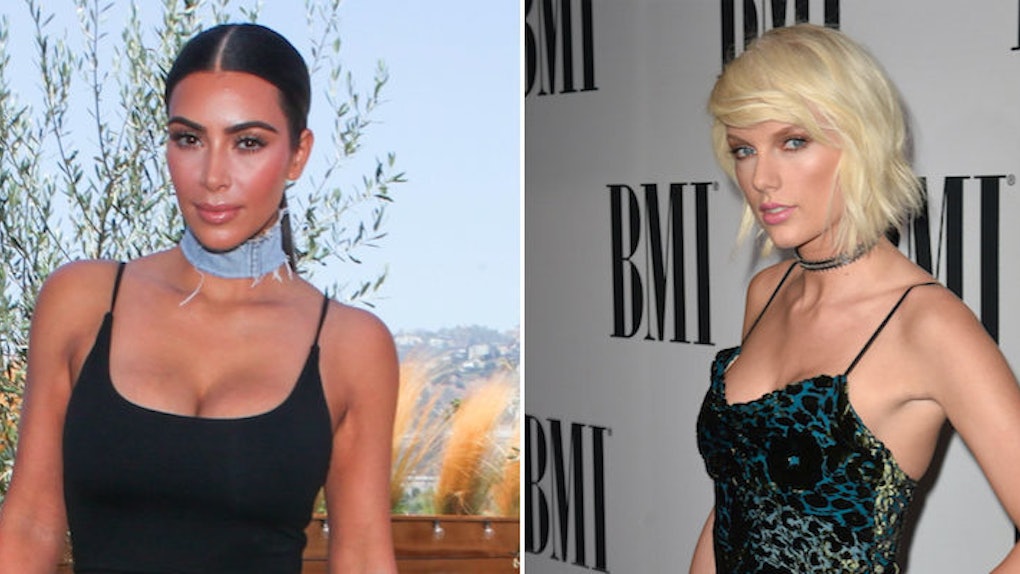 Kim Kardashian Could Apologize To Taylor Swift At VMAs

Oh man, you remember that time the internet gave Kim Kardashian an absurdly hard time when she introduced Sam Smith at the 2014 VMAs as "my friend"?

Well, this time Kim might be at the VMAs calling out a former "friend" as "my greatest nemesis -- a plague on your house!"

That's right, Kim Kardashian will officially be presenting at this Sunday's VMAs, and with her husband and 2020 presidential candidate Kanye West up for Video of the Year and Best Male Video, it could be a big night for the two of them.

But the real moment I'm looking for might not even happen. Will Kim bury the bad-bloody hatchet with Taylor Swift with some sort of apology? WILL THIS GREAT WAR EVER COME TO AN END?!

Disclaimer: I do not believe Kimmy has anything to apologize for. Let's catch you up to speed on all the drama between House Kardashian, House West and House Swift.

Recently, Kim took a Snapchat of a sign out in LA with the words "I made that bitch famous" written on it.

This is the most recent shade thrown in a series of back-and-forths between Kim and Taylor after Kim shared Taylor's phone call with Kanye, the one in which the singer OK-ed the use of her name in the song "Famous."

As you probably know (because you think this fiasco is as entertaining as "Game of Thrones"), Taylor since stated she never signed off on being called "that bitch" (hence, Kimmy's salty Snapchat).

Whether you're on Team Kimye or Team Tay (but seriously, go Team Kimye), you're just waiting for the sweet relief of peace between the three of them.

It seems like they just got over Kanye's last feud with Taylor over his 2009 VMA comments.

Yo, Kim, I'm really happy for you, I'mma let you finish, but Kanye had one of the best celeb beefs of all time!

Perhaps Kim will use her stage time to extend the olive branch, but my bet is she'll take the opportunity to massively diss Taylor in a shade so great, it will blot out the sun for weeks.

What do you think Kim will do?

Citations: Kim Kardashian to present at MTV VMAs for the second time as she supports husband and double nominee Kanye West (Daily Mail)