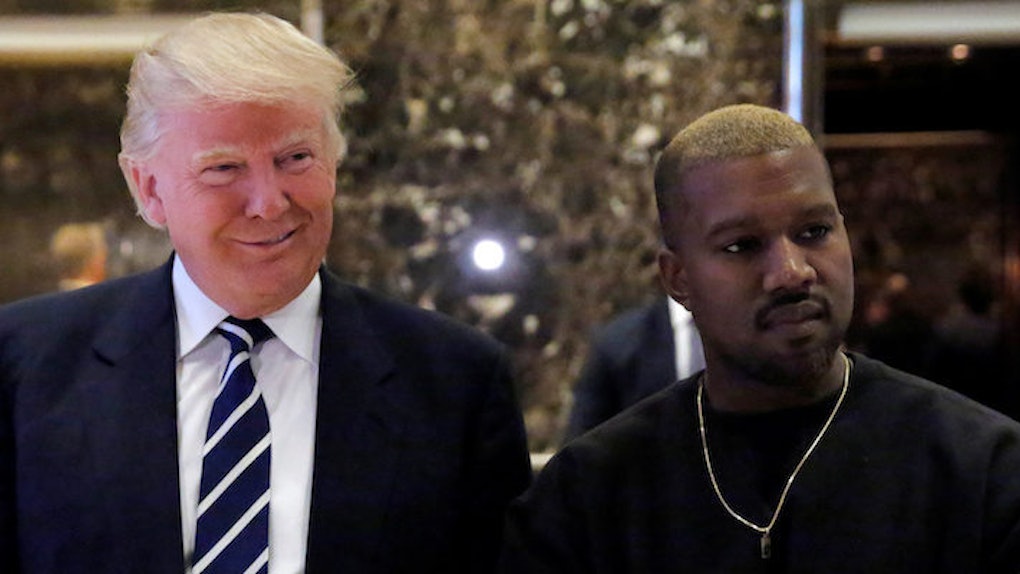 Kanye West May Be Performing At Donald Trump's Inauguration

Kanye West had a meeting with Donald Trump on Tuesday morning, because that's the kind of year 2016 is.

And it doesn't look like 2017 is going to get much better because most people seem to think the meeting was to discuss Kanye performing at Trump's inauguration in January.

The 39-year-old rapper was filmed walking into Trump Tower in NYC and came down with the president-elect to face the press about an hour later.

In a video captured by C-SPAN in the Trump Tower lobby after the meeting, Trump and Kanye faced reporters but answered very few questions.

When asked what the meeting was about, Trump responded,

Both Kanye and Trump ignored questions regarding Kanye's desire to run for president in 2020 and the possibility of performing at the inauguration.

When pressed, Kanye finally spoke to reporters and said,

I just wanted to take a picture right now.

The rapper and the president-elect ended the photo op with a hug, and Trump said to Kanye,

Take care of yourself, I'll see you soon.

According to a report from CNN, Kanye is the one who requested a "15-minute meeting" with Trump.

PHEW. Wow. So that happened.

As much as I enjoy the image of Donald Trump and Kanye West spewing philosophical bullshit about "life" up in Trump Tower, this meeting surely had a purpose greater than that.

According to a report from E! News, a source close to Kanye said the rapper met with Trump to discuss becoming an "ambassador of sorts," and taking on an "entrepreneurial leadership role."

Whatever the heck that means has yet to be revealed.

There are jokes going around that Kanye is being considered for a cabinet position — at least, I hope to God they remain jokes.

But a slightly less apocalyptic explanation is that Kanye will be performing at the US Capitol next month, at the inauguration of the 45th president of the United States.

I feel like this is probably happening, and I'm not the only one who thinks so.

I mean, look at the facts.

There are always performers and celebrities at the presidential inauguration. It's tradition.

At Obama's inauguration in 2009, Pete Seeger and Bruce Springsteen gave a very moving performance of "This Land is Your Land."

Later that night, at the inaugural ball, Beyoncé gave her very moving performance of "At Last."

But in the wake of the Trump election, it seems highly unlikely any celebrity would be willing to perform for this man (certainly not Beyoncé, Pete Seeger or Bruce Springsteen).

Just last month, right before his tour cancellation and hospitalization for exhaustion, Kanye interrupted a concert in San Jose to tell the crowd he "would have voted for Trump."

I told y'all I didn't vote, but what I didn't tell you... If I were to have voted, I would have voted for Trump.

(When asked by reporters in Trump Tower on Tuesday if he regretted not voting for Trump, Kanye did not respond.)

So, Trump needs at least one big name to perform at his inauguration, and Kanye West is basically the only big name who sort of supports Trump.

Now they're meeting and hugging and smiling for the press.

I'd say Kanye fans should get ready for his next concert to be in DC.